Miami 2022 Review: THE COW WHO SANG A SONG INTO THE FUTURE, A Chorus of Anger and Longing 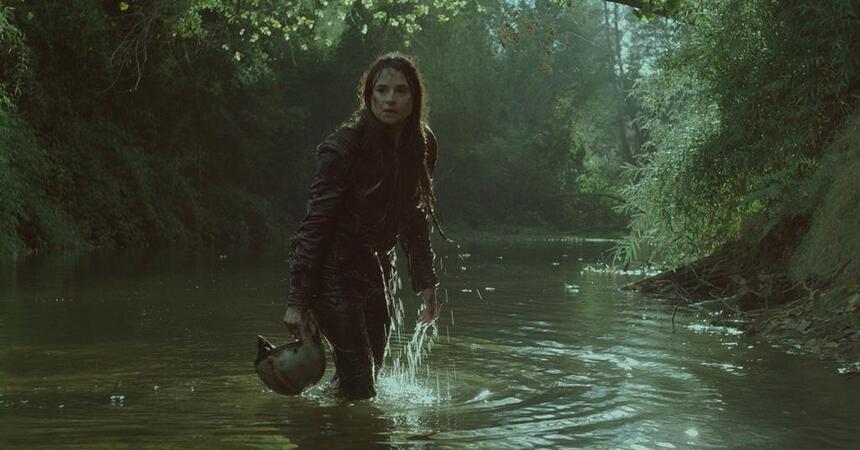 Cows might be one of the few animals whose 'wild' version no longer exists; now bred solely in domestication, they represent how humans have forcibly adapted the natural world for our wants, without regard to the consequences. But now the consequences have come back to haunt us, with a vengeance. It is this combination of haunting and vengeance that creates the surreal and magic realist atmosphere of The Cow Who Sang the Song into the Future, Francisca Alegría's feature film debut, an eco-thriller that asks us to listen to the earth and its 'lower' inhabitants, their song both mournful and angry.

Run-off from a pulp mill is causing massive damage to a vital river in central Chile; so much so, that fish by the hundreds are dying, washed up on shore; their souls now free to sing their enchanments and warnings to human ears. From the now-exposed depths of the river emerges Magdalena, an activist who drowned decades earlier, leaving behind her husband Enrique and two children. As she returns to the streets of her town, her husband, now elderly, spots her and has to be taken to hospital following the shock. This prompts the return of his daughter Cecilia, now a doctor, to help her brother Bernardo, who runs the family dairy farm.

It would seem that Magdalena's arrival is due to the environmental crisis, but it's clear that she has unfinished business with her husband and children; neither Enrique nor Cecilia are happy to see her, and in fact, Cecilia does what she can to drive her mother back to whatever grave she emerged from. Magdalena's movements through the town and the house wreak havoc on electronics, as it she has been imbued with the life force of the earth, seeking to disrupt that which is making life on earth uninhabitable. Her motorcycle leathers (she tied herself, or possibly was tied, to her motorcycle when she went into the river) make her a natural ally to the eco-warriors, who also seek to disrupt the destructive status quo.

Cecilia's reaction to her mother's prolonged absence was to become reserved and conservative; she refuses to accept her trans daughter's identity (something her other young daughter does with ease), and even when she is the only one who knows her mother has returned, refuses to accept it. Her brother Bernado is constantly disparaged by Enrique for his supposed failure as a farmer; but for the cows, whose voices we also hear, death might be the only means of escape to a better life. Magdalena is (mostly) mute, speaking through the Siri function on her granddaughter's smartphone; it seems rebellion and acceptance of a different, necessary existence has skipped a generation as the two bond. Neither belongs in the restrictive society to which they are forced to confirm, and so they find strength in each other.

The world Magdalena left behind has become worse in her absence, in part because of it, but not through her fault. Like the earth that is now in rebellion, this mother was expected to give everything to her family and expect nothing in return. Alegría wraps this story in the fable of the earth, as it strives to find its own voice. She and cinematographer Inti Briones (Song Without a Name) gives us a daytime world of harsh coldness, where humans must face their destructiveness and destruction, and a sumptuous yet dangerous night - whether it be the sexual energy of a club, or the dense sensuality of the jungle teeming with life waiting to engulf those who would embrace it.

The Cow Who Sang a Song into the World creates a deeply affecting mood, as the song of the earth slips into your ears and into your bloodstream. It asks us of the price we're willing to pay as we cause (either passively or actively) our and the earth's destruction, and how we can decide to leave it behind, if we have the courage.

The Cow Who Sang a Song Into the Future