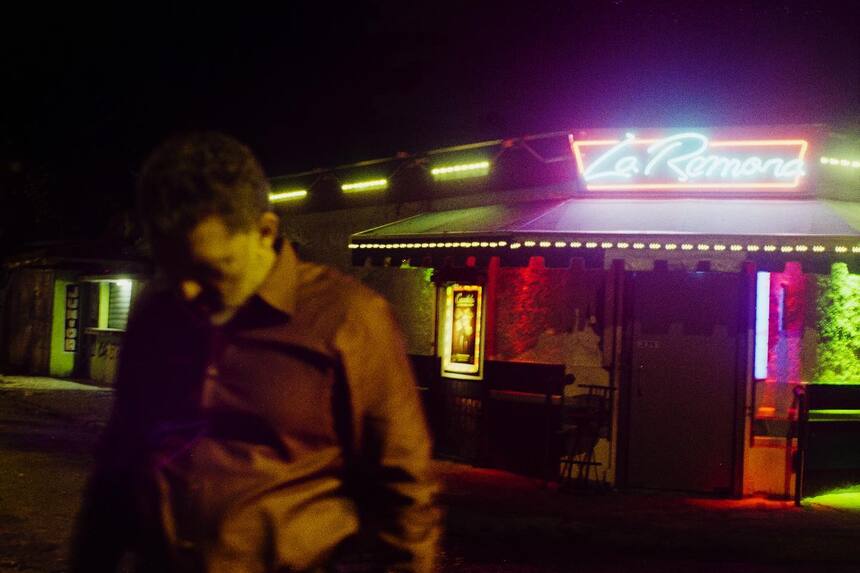 Likely any town or city has a 'seedy' side - the ones filled with the dregs of society, the 'sons of bitches' who bear the brunt of cruelty and stereotyping of crime and social dejection. One could argue that, given it's the rich and powerful who hold all the proverbial cards, that 'seedy' side might contain a little more virtue and honesty that is perceived. But, corruption and crime are everywhere, and it's just the rich who get away with it.

Candela is the kind of mid-budget thriller that we rarely see nowadays, as well as being a dark tapestry of life of those living on the proverbial edge, in society and the political spectrum. The first feature film from Dominican filmmaker Andrés Farías Cintrón, is a neon-and-music-soaked queer thriller, with blurred lines of loyalty and sexuality, all under threat of mother nature and a haunting spirit that might be death in disguise.

In this corner of the Dominican Republic, the authorities warn of an impending hurricane, currently brewing off the coast, to soon make landfall. Told in threee parts, the story begins with poor little rich girl Sera, tired of her opulant life where she must play a very specific part - but then she goes to play another part, 'slumming' in the seedy part of town, enjoying sex with strangers and playing at being bad. Except when she isn't playing, and only her societal position gives her the power to try and cover up her crime. Enter Lieutenant Perez, a police detective who is not above stealing alcohol and drugs from a crime scene, yet is still compelled to solve the case if it brings him closer to his estranged daughter, despite threats from those in power. Enter Candela, a Cuban drag queen, who might be respected on stage but it proverbial (and likely) spit on in the streets. And each of these people's lives now revolve around drug dealer and poet Renato, whom we only meet at the climax of his life.

As the hurricane bears down on the island, the wind slowly picking up, the waves intensifying from subtle to monstrous, so too does the insidious manifest slowly into these character's lives. Sera might elicit some sympathy given how she is treated by the men in her life, but that soon withers once her privilege leaks into deadly power and manipulation. The Lieutenant begins less sympathetic, but his cold and corrupt heart melts quickly as he sees the harm he has wrought and how it crashes everything around him. Candela bears the brunt of this corruption and power-wielding; as a foreigner, an Afro-Latino, as a queer person, he has almost no power and must move with the winds for what little he can do to save himself.

Does a disguise hide or reveal? Sera might be more herself when she's in the slums, wearing what she sees as its costume (revealing skirt, hooker heels), and yet, she still leans on her privilege when necessary. Perez tries to disguise himself behind his badge, but it's only when he is naked, literally, in his lover's bed, that he shows vulnerability and care. Candela lives off his disguises on stage; it is the face that he shows in the harsh light of day that leaves him open to ridicule, and danger. The light of day brings reality and its harshness; the night brings only some comfort, as the hurricane moves closer. And in the centre of this - perhaps the spirit of the hurricane? - a strange person in native garb, with predictions of how the storm will 'clean up' the island.

Farías Cintrón made the film in adherence with the Caribe Pop Manifesto. Unlike Dogme 95 which related to the more technical process, Caribe Pop focuses on the reprentation of the region in cinema, and the kind of stories and characters to be seen on the screen. It's a deep and joyful promise, and one that seems fulfilled in Candela, which moves in subtle and haunting ways. A thriller that shows both the beauty and the pain of certain corners of Dominican life, the terrible power of the rich, and the burden on the marginalized. The soft neon pinks and blues contrast with the storm clouds and waves, literal and metaphorical, that will soon swallow everyone whole

Do you feel this content is inappropriate or infringes upon your rights? Click here to report it, or see our DMCA policy.
Andrés FaríasCandelaCésar DomínguezFélix GermánLaura ConyedoMiami Film FestivalRey AndújarSarah Jorge León