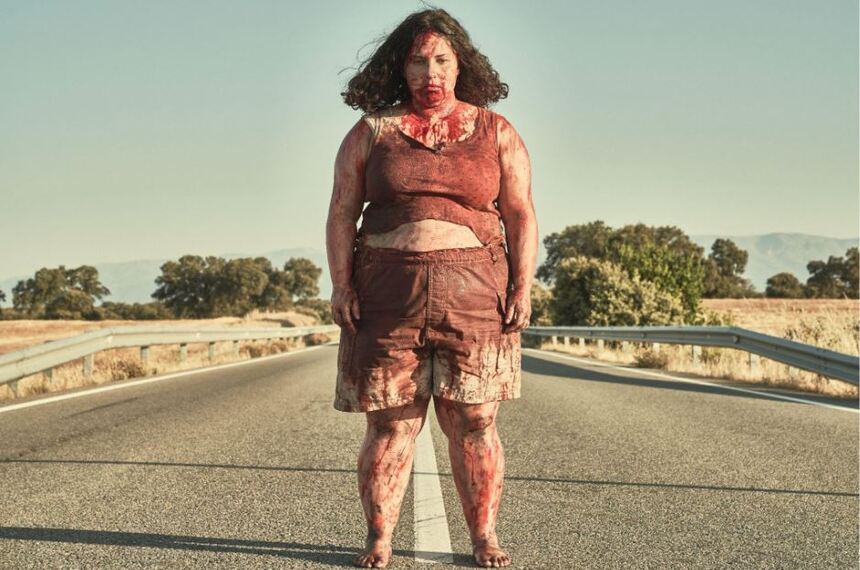 Director Carlota Pereda makes a bold solo debut feature in Sundance Midnight shocker, Piggy (Cerdita). A bullied girl participates in a brutal revenge through apathy in this Spanish genre highlight, delivering a complex and evocative character study that is sure to spark conversation.

Teenage Sara (Laura Galán) is a shy girl. An overweight girl who works in her family’s butcher shop – not the most glamourous of jobs – Sara is cruelly nicknamed Cerdita, or Piggy, by the local cool girls who taunt her mercilessly for everything from her job handling offal to her appearance. While Sara attempts to disappear, it’s almost impossible as her family is one of her small town’s leading providers of meat, meaning she is constantly forced to interact with her tormentors.

While the mean girls Roci (Camille Aguilar), the unimaginably cruel Maca (Claudia Salas), and a girl who appears to have once been a friend, Claudia (Irene Ferreiro), certainly make the outside world a dangerous and hateful place, home is no picnic either. Sara’s family is dominated by her acerbic mother, played by Carmen Machi, who admonishes her vocally about her eating habits, as though she wasn’t acutely aware of her appearance already. Her father (Julián Valcárcel) is a jovial sort who doesn’t seem to concern himself with such trivial externalities, but also shrinks from confronting his wife when she goes in on Sara.

The only time Sara seems to be at peace is during her siesta-hour dip in the local public pool. At a time of day where the entire sleepy hamlet seems to drift off into their own worlds, Sara can be alone and free in the pool, weightless and carefree, even daring to wear a two-piece bathing suit away from the judgmental eyes of her tormentors.

One day, however, they show up and that peace is shattered, but it’s just the beginning of this cruel tale. Seeing their perfect moment, Maca and the rest brutally berate Sara from a nearby bridge, eventually stealing her clothes and running off, forcing their victim to walk the long-distance home nearly naked. Embarrassed and exhausted, she begins the trek, but is quickly confronted by a shocking act of violence.

She sees the three girls beaten and bloodied, being loaded into a van by an unknown assailant (Richard Holmes). They don’t know each other, but in a brief wordless exchange, the man pities Sara and throws her a towel to cover herself up before driving off with the girls, presumably to do his worst.

When they don’t come home, the town is in an uproar, and they soon find out that Sara is the last to have seen them alive, but she says nothing. This is her revenge. Cold, simple, cruel in its own way, and perhaps it even feels just, at least for the moment.

This is Piggy. From here on out, the film follows Sara like a hawk, examining her every action and inaction with precision. We watch as her feelings evolve, her guilt begins to build, she struggles with what she has done with her lies-by-omission to the authorities, but we never know if or how she’ll break. Is the torture of feeling responsible for whatever happens to her bullies worth the relief of freedom from them?

Writer/director Pereda presents a story of ordinary brutality that rarely moves beyond the plausible, making it all the more terrifying. The unspoken relationship between Sara and the unknown man grows more intense and discomforting even through they almost never interact at all. Exploring the inner conflict in minute detail, Piggy blurs the lines between victim and villain, frequently flipping the script on the viewer and shifting our allegiance from one to the other as Sara’s every decision seems to result in some horrible unintended consequences.

As one can easily glean from the frequency with which she’s mentioned above, Piggy lives and dies by Laura Galán’s performance in the lead role, and she is a stunner. Able to convey all of the complex emotions and confusion presented by Pereda’s script, Galán is a powerhouse. Nearly silent for most of the film, her portrayal of the way bullying trauma can affect not only the victim’s self-image, but also their ability to identify what is right and wrong projected outwards into the world at large is uncanny and terrifying. Her performances in scenes where she confronts and is confronted by her mother are particularly effective in revealing a certain type of unwittingly damaging family relationship.

Shot by Rita Noriega in a cleverly selected 1.33:1 aspect ratio, the narrow image space conveys a kind of solitude and claustrophobia that reflects Sara’s myopic world view. Not myopic by choice, but because she’s scared to look at the wider world since the small slice she knows is so hurtful. It’s a brilliant, deliberate choice that supports the narrative and thematic thrust of the film in a novel way.

Piggy is no easy watch. People who’ve had experience with bullying will certainly relate, and there is definitely the temptation to put this in the “good for her” category of final-girl-horror (Ready or Not, Midsommar, Carrie), but the film has broader themes in mind. Make no mistake, though, the film is very violent in spots, though perhaps in this case the emotional violence outstrips the visceral kind.