Liam Neeson and Aidan Quinn star in an action-thriller, directed by Mark Williams. 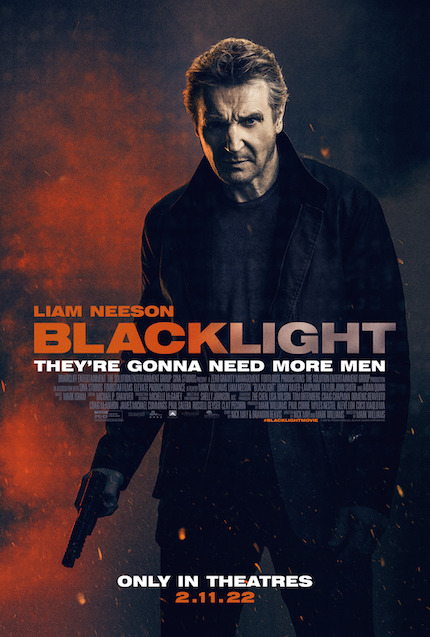 Cinematographer Shelly Johnson is the star of the picture.

Blacklight
The film opens, only in movie theaters, Friday, February 11, via Briarcliff.

Every surface gleams. Every light is diffused. Every scene looks spectacular.

Shelly Johnson's career behind the camera stretches back to the late 1970s. He became a director of photography in the late 1980s, and his work since then in episodic television has garnered four ASC award nominations, while in feature films, he has demonstrated wonderful versatility in capturing images in challenging films such as Greyhound and in action thrillers like Honest Thief.

The latter credit is most pertinent, since Blacklight reunites him with the earlier film's star, Liam Neeson, and director, Mark Williams, to make an incredibly good-looking action thriller that often made me forget about the rudimentary mechanics of the narrative, which frequently elides logical development in favor of impressive action sequences that emphasizes the grace and beauty of moving bodies, crashing vehicles, and flaming property.

As in Honest Thief, Liam Neeson plays a principled person who wants to retire so he can spend quality time with his loved ones. In Blacklight, Travis Block (Neeson) is a principled secret operative, a fixer, charged with helping out deep-undercover FBI agents who have lost their way. He yearns to stop and spend regular quality time with his young granddaughter, Natalie (Gabriella Sengos), and maybe even repair his fractured relationship with his daughter and her mother, Amanda (Claire van der Boom), who has heard this tune before.

Block's longtime friend and sole operator, Gabriel Robinson (Aidan Quinn), who describes the job as "saving souls," has ascended to become FBI director, and insists that Block stay on the job to take care of sticky situations. Ordered to bring in rogue agent Dusty Crane (Taylor John Smith), though, Block fumbles as Dusty manages to slip through his fingers, while raising doubts about Robinson's true intentions.

The slippery Dusty had already made contact with young reporter Mira Jones (Emmy Raver-Lampman), and her inquiries lead Block to contact her and tell her to lay off the story. Naturally, this only arouses her interest still further, and leads to more contact as she pursues the story.

Really, the narrative is only necessary foreground for the action that frequently erupts. Sense and sensibility may go out the window, but the satisfying crunch of action rarely pauses very long, accompanied by the glorious photography of cinematographer Shelly Johnson and his crew, as well as a talented stunt team of performers. On top of that, Liam Neeson and Aidan Quinn battle it out fiercely, mostly in testy exchanges, and sometimes in deeds that look authentically sock-o.

Director Mark Williams has made an action picture that looks good and fills the screen with a generous amount of action, anchored by a plotline that, at least, questions the idea of people in power who abuse said power. Blacklight is more entertaining than might be expected.

Do you feel this content is inappropriate or infringes upon your rights? Click here to report it, or see our DMCA policy.
Aidan QuinnAustraliaChinaLiam NeesonMark WilliamsUSNick MayBrandon ReavisTaylor John SmithActionThriller