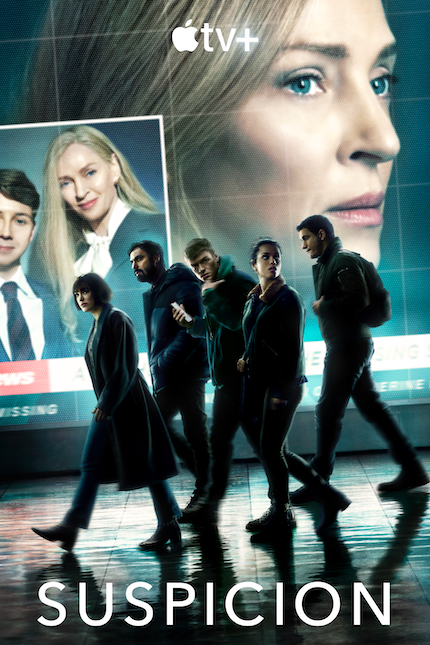 A brazen kidnapping in New York impacts the lives of three ordinary people living in and around London, as well as a passenger on an international flight bound for Great Britain.

Based on the Israeli series False Flag (2015), which ran 18 episodes over two seasons, Suspicion is an English-language variation on the original show's premise, relocating the primary action to Great Britain and adapting its themes as well to better fit a narrative that starts with a kidnapping that is high-profile because it involves the son of the potential US Ambassador to the United Kingdom.

Uma Thurman plays Katherine Newman, the potential new ambassador, who has become wealthy in her career as a 'strategic consultant' to high-profile people in various industries. Although she provides the gasoline that drives the plot, the show soon bounces between apparently ordinary British citizens who are quickly identified as the primary suspects in an urgent National Crime Agency (UK) investigation, led by Vanessa Okoye (Angel Coulby) and assisted by FBI Agent Scott Anderson (Noah Emmerich).

Tara (Elizabeth Henstridge), Natalie (Georgina Campbell), and Aadesh (Kunal Nayyar) are introduced in their everyday lives in their socially-different worlds. On first pass, they appear to be ordinary, but a second pass reveals irregularities, and then as the first episode concludes, they are all apprehended for reasons they claim not to understand. The fourth suspect, Sean (Elyes Gabel), escapes, but he seems to be the most suspicious, and dangerous, of them all.

Rob Williams created the show, serves as showrunner, and wrote the first two episodes, which were directed by Chris Long (The Americans). Under their care, the series lays out the leading characters in a manner that's easy to follow, while also dropping strong hints that appearances can be deceiving, which heightens the mounting suspense and helps to create and maintain suspense when certain narrative twists become outrageously ridiculous.

But fun! The performances, especially by Elizabeth Henstridge, best known for Marvel's Agents of S.H.I.E.L.D., makes the characters more empathetic and raises a rooting interest in seeing them all survive and be proven innocent. I also enjoyed Lydia West as a determined sibling and Noah Emmerich's turn as a FBI man who constantly raggs on what the Brits are doing; it's a good contrast with his character in The Americans.

Suspicion beggars belief at times, yet its narrative propulsion kept me watching until the last moment.

Do you feel this content is inappropriate or infringes upon your rights? Click here to report it, or see our DMCA policy.
Apple TV+Elizabeth HenstridgeElyes GabelKunal NayyarNoah EmmerichUKUma Thurman