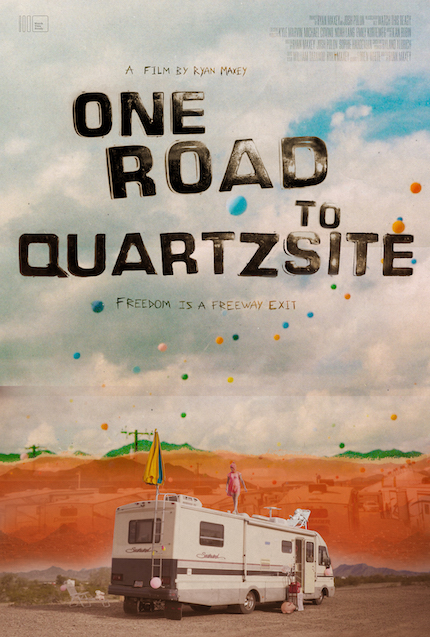 Where one road ends, another begins.

One Road to Quartzsite
The film enjoyed its world premiere at this year's recently concluded Big Sky Documentary Film Festival.

Some years ago, as I was driving from Texas to California through the desert regions of the southwestern United States, I caught sight of a large number of recreational vehicles, trailers, trucks, and automobiles near the highway. My mind was on other things at the time, but I always wondered who would congregate in that particular area, and why.

Years later, Chloé Zhao's Nomadland (2020) caught everyone's attention, perhaps primarily due to Frances McDormand's fine, measured performance, and Zhao's spare yet propulsive directing, but also awakening viewers to the lives of people who become nomads, with no fixed place of permanent residence. It also began to answer the questions that had been raised in my mind some years before.

Filmmaker Ryan Maxey first visited Quartzsite, located in the western part of Arizona, several years ago. Rather than simply pass through, or speed past on the highway, as I had done, Maxey spent several winters there, and became fascinated with the people who lived there.

Now he's made his first feature-length documentary, One Road to Quartzsite, a cinéma vérité style of film, a style that may explain why people were demonstrably comfortable talking with him about why they were living there. For a casual viewer, even with no exposure to, or personal interest in, a nomadic lifestyle, the film is a welcoming introduction to the community and its residents.

It also functions as a broader commentary on modern-day 'Life in These United States,' to borrow a title from Reader's Digest magazine, illuminating the type of people who do not seek or receive much coverage from the national press. Many of them are people who are the age of Frances McDormand or older; some are younger; some are children. Some are physically fit; some are physically damaged; some are dying.

The doc keeps an amiable, friendly, non-judgmental tone, even when some of the residents make known points of view that struck me as wildly ignorant or rather foolish or silly, or even seriously repugnant. Director Maxey allows them to speak their mind; it reminded me of conversations I've heard among strangers in restaurants. I'm not inclined to tell them flat-out how ridiculous or even offensive their comments might be, and neither is Maxey, at least as recorded in the film!

To make it clear, the small portion of comments that I found risible are drowned out by the conversations that illustrate how people got to this point in their lives: what forces shaped them and how they are dealing with their present realities, which are often harsh and brutal. I was struck by their resilience and humility.

Nobody pretends to know all the answers. Sometimes it's best just to sit back, enjoy the day, watch the splendid sunsets, and recline into the good, refreshing night. Sometimes that's what we should all do.

Suffused with a kind and gentle spirit, the film nonetheless stirs thoughts of hitting the road and never looking back.

Full disclosure: Ryland Aldrich, who is this site's Festivals Editor, is credited as Consulting Producer on the film. He was not involved in the writing or editing of this review.

The film enjoyed its world premiere at this year's recently concluded Big Sky Documentary Film Festival. It will also be screening shortly at the Santa Barbara Film Festival (March 4 and 6).

Do you feel this content is inappropriate or infringes upon your rights? Click here to report it, or see our DMCA policy.
Big Sky Documentary Film FestivalRyan MaxeyRyland AldrichUS