Bill Nighy stars in an English-language drama directed by Oliver Hermanus, based on Kurosawa Akira's 'Ikaru.' 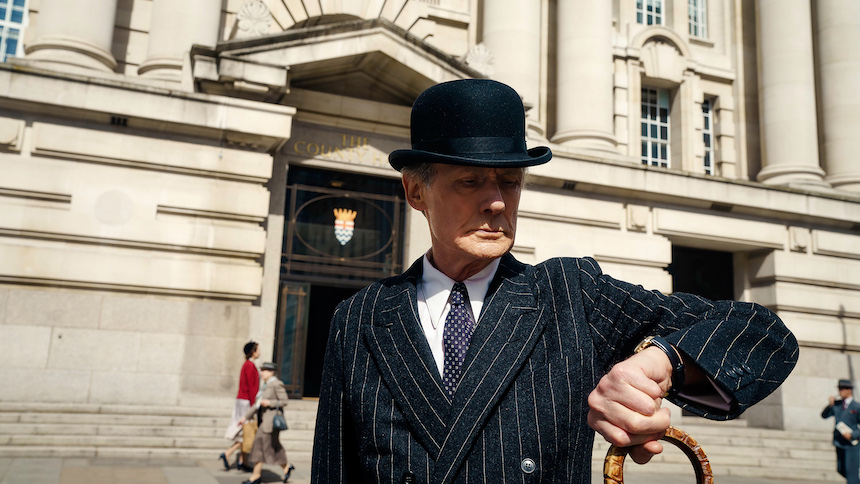 It takes near superhuman levels of self-confidence or hubris to remake an acknowledged masterpiece by a world-class filmmaker.

That gently satirical, humanist masterpiece, Ikiru (To Live), written and directed by world-class filmmaker Kurosawa Akira (Ran, Throne of Blood, Seven Samurai), has more than stood the test of changing critical tastes and audience interest. But when the adapter in question is a Man Booker- and Nobel Prize-winning novelist Ishiguro Kazuo (Never Let Me Go, The Remains of the Day, An Artist of the Floating World), that self-confidence is nothing if well-earned and, of course, well-deserved.

Still, adapting Ikiru, transposing its setting from 1950s post-war Japan to 1950s post-war England, has more than its share of risks and downsides, none of which, unsurprisingly and thankfully enough, materialize in Ishiguro and director Oliver Hermanus’s (Moffie, The Endless River, Beauty) aptly titled Living.

Living centers on Mr. Williams (Bill Nighy), a British bureaucrat closer to the end of his life than the beginning. Stoic to the point of somnambulism, Mr. Williams defines himself by the carefully circumscribed daily rites and rituals, the uniform he wears (a black suit and tie), the briefcase and umbrella he always carries, and the bowler hat he always wears.

The head of the Public Works Department, Mr. Williams operates with a terseness bordering on the inarticulate. Everything from when and where he boards the train for London to the brief pleasantries exchanges with his colleagues at, before, and after their respective workdays never stray from a predetermined script. He’s respected, even feared, but it’s just as obvious he’s not admired or even loved.

The arrival of a new, younger colleague, Peter Wakeling (Alex Sharp), changes nothing about Mr. Williams or how he functions. The imminent departure of the only woman on his team, Margaret Harris (Aimee Lou Wood), has no noticeable effect on the taciturn Mr. Williams as well.

It’s not until Mr. Williams visits his doctor and receives the news that everyone dreads receiving -- he’s dying from cancer and there’s nothing 1950s medicine can do to change his diagnosis or his fate -- that Mr. Williams, in what otherwise would be cliched turn in the hands of an unsubtle writer or director, seemingly awakens from a seemingly lifelong stupor, deciding, at least initially, to find physical, surface-deep pleasures wherever he can before he expires.

From there, Living follows Mr. Williams on his search for meaning, however temporary or transitory. While he finds pleasure in joining a dissolute writer, Sutherland (Tom Burke), in his peripatetic wanderings through a seaside town’s nightlife, it’s not until he crosses paths again with Margaret, Mr. Williams’ opposite by any definition, that Mr. Williams begins to experience something approaching a spiritual and emotional transformation.

Every moment, every conversation, every observation no matter how ordinary or banal, becomes weighted with meaning for Mr. Williams, but it’s not until he decides to leave a legacy of some kind that Living, like Ikiru, falls into focus: A long-stalled project championed by local women Mr. Williams and every bureaucrat like him has refused to approve.

Touchingly, movingly played by Bill Nighy with the reticence, modesty, and restraint of classic British stoicism, Mr. Williams, like his Japanese predecessor, Watanabe Kanji (Kurosawa regular Shimura Takashi), more than half a century ago, emerges as an increasingly sympathetic, profoundly root-worthy character. Living patiently peels back Mr. Williams’s reserved nature and somewhat fearsome presence to reveal a life lived through multiple calamities both personal (widowed at a young age) and national (the traumatic Second World War), a consciously deliberate attempt to impose order and regularity on the chaos of everyday life.

Collectively, they contribute to making Living feel like a long-lost, newly found film made by Michael Powell and Emeric Pressburger (The Red Shoes, Black Narcissus, A Matter of Life and Death).

Living premiered on Friday, January 21, at the Sundance Film Festival.

Do you feel this content is inappropriate or infringes upon your rights? Click here to report it, or see our DMCA policy.
Aimee Lou WoodAkira KurosawaAlex SharpBill NighyKazuo IshiguroLivingOliver HermanusTom BurkeDrama