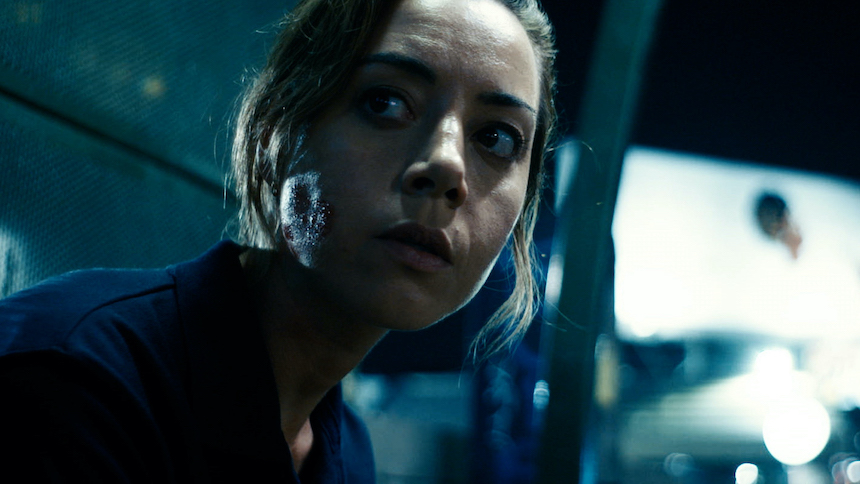 More than a decade after becoming a regular onscreen presence on both TV and film, Aubrey Plaza somehow remains one of the most underestimated, underappreciated performers of her generation, the likely result of Plaza’s determined focus on character-driven, challenging indie roles as opposed to big-budget Hollywood blockbusters (of the spandexed or cape-and-cowl variety).

In role (Safety Not Guaranteed) after role (Ingrid Goes West), from conventional network TV (Parks & Recreation) to the outer reaches of cable (Legion), Plaza has been positively fearless, delivering boundary-pushing and career redefining performances, some odd, some bizarre, all not just watchable, but memorable as well.

In writer-director John Patton Ford’s feature-length debut, Emily the Criminal, Plaza plays the title role, an LA-based, marginalized ex-art student without personal or professional prospects who is repeatedly faced with no-good, terrible, bad choices (some less no-good, terrible, and bad than others) that turn the film’s title into a prediction rather than an observation. More than 10 years out of college, Emily faces a seemingly unpayable mountain of student debt ($70K), a day job at a restaurant without a future, and an obvious lack of friends or acquintances.

Only an upwardly mobile high-school/college friend, Lucy (Megalyn Echikunwoke), seems to care about Emily's well-being. Even there, though, it’s primarily out of a sense of obligation and loyalty rather than genuine, guilt-free friendship.

Everything changes for Emily when one of her co-workers, Javier (Bernardo Badillo), clues her into “dummy shopping,” purchasing goods, usually high-end electronics, from big-box stores with stolen credit card information and reselling them to eager buyers at too-good-to-be-true discounts, keeping a cut of the proceeds in exchange for participating in the scam. It’s a not-uncommon scam, but Emily, less by intent than desperation, becomes all but addicted to the low-risk, low-reward scam. It doesn’t hurt that one the operators of the credit card scam, the Lebanon-born Youcef (Theo Rossi, Sons of Anarchy), takes an immediate liking to Emily, becoming her mentor in criminal matters and later, a potential romantic partner.

Outside of Youcef’s potentially duplicitous partner/cousin, Khalil (Jonathan Avigdori), Ford keeps the uglier side of the criminal underworld, including the usual assortment of thugs, hangers-on, and brutal crime bosses, offscreen. Ford follows the general thesis that criminals are made, not born, and in Emily, she’s “made” by an increasingly dire, constricting set of circumstances, up to and including capitalistic exploitation (student lands, the low-paying, benefits-free restaurant gig,  non-paying internships) and a pre-film criminal record (DUI, assault) that counters every non-criminal attempt Emily makes to improve her life personally and financially.

Maybe that’s an easy, simplistic, reductive answer to the complexities of the real world, but Ford avoids didacticism or sermonizing, letting Emily herself and Emily’s story dictate what’s said, what’s done, and when. It’s clear, however, that Ford sympathizes with Emily and expects the audience to sympathize with her. That we do is a function both of Ford’s taut, thriller-oriented script and Plaza’s typically enthralling performance as the downwardly spiraling Emily.

Every decision logically follows the other, each time taking Emily further and further into criminality. By the final, self-serving moments, Emily should be entirely unsympathetic, but given the journey Ford has taken Emily and the audience on, she’s the opposite.

Emily the Criminal premiered on Monday, January 24, at the Sundance Film Festival.