This initial trio is part of a new collection they are calling Russian Fantasticka, with more planned releases on the way. The first three will be available for theatrical, VOD, and home video viewing in 2022 through Grasshopper Films and on home video through OCN.

Check out the gallery below for more information about the films and a preview trailer for Ilya Muromets:

Legendary Russian fantasy filmmaker Aleksandr Ptushko’s sweeping, visual FX-filled epic ILYA MUROMETS (THE SWORD & THE DRAGON) is one of his most enchanting achievements: a stunning CinemaScope ballad of heroic medieval knights, ruthless Tugar invaders, wind demons, and three-headed fire-breathing dragons, all set against a mythic landscape of pastoral, unspoiled Russia. Based on one of the most famous byliny (oral epics) in Old Russian culture, the film stars Boris Andreyev as the bogatyr (warrior) Ilya, waging a decades-long battle against the Tugars who threaten his homeland, kidnap his wife, and raise his own son to fight against him. Director Ptushko began his career in the 1930s and went on to become a combination of Walt Disney, Ray Harryhausen, and Mario Bava for his dazzling, bejeweled fantasies including THE STONE FLOWER, SADKO, SAMPO, and RUSLAN & LUDMILA. The first CinemaScope film produced in the Soviet Union, ILYA MUROMETS was released in a truncated, dubbed version in the U.S. as THE SWORD & THE DRAGON, that heavily downplayed the epic poetry and lyricism of the original. This will be the first-ever official U.S. release of the original full-length version of ILYA MUROMETS.  (In Russian with English subtitles.) 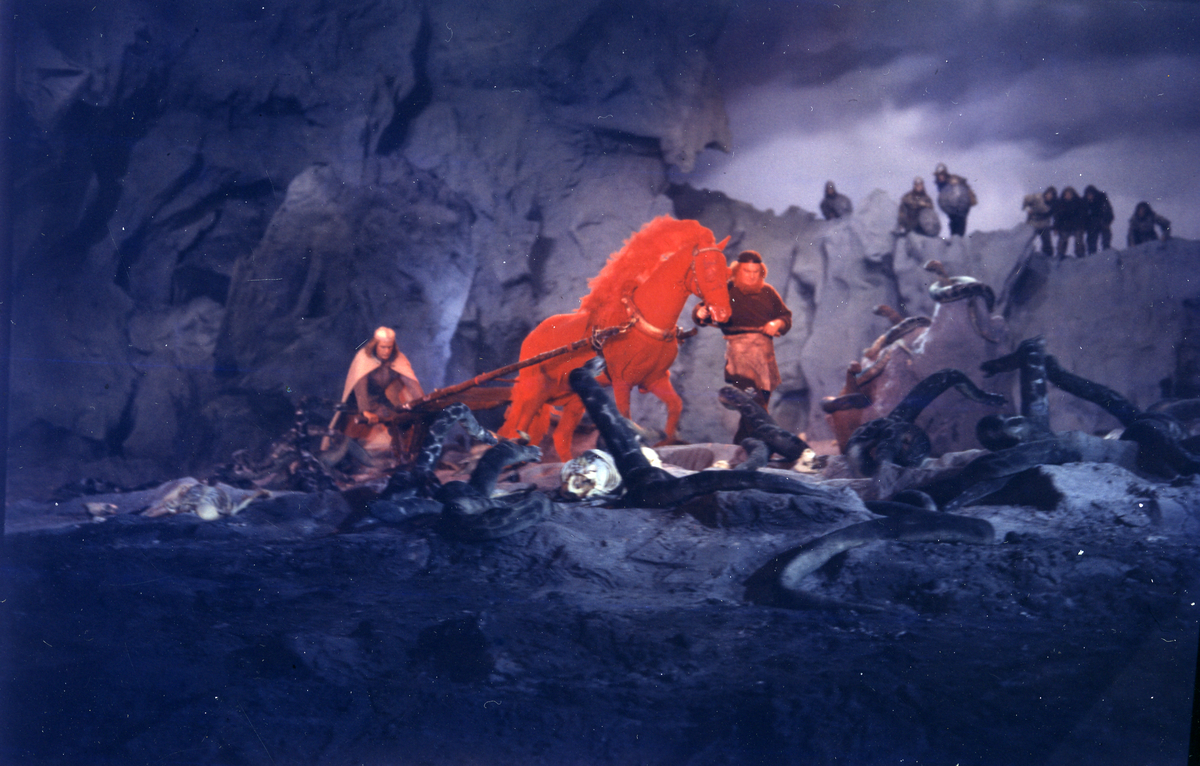 SAMPO (THE DAY THE EARTH FROZE), 1959, Finland/USSR, 91 min. Based on the Finnish national epic “Kalevala,” director Aleksandr Ptushko’s ravishing, mystical fantasy tells the story of a sinister witch Louhi (Anna Orochko) who covets the Sampo, a magical, rainbow-colored mill that can produce endless salt, grain, and gold. When the hero Lemminkäinen (Andris Oshin) attempts to stop her, Louhi steals the sun, plunging the world into eternal darkness. A Finnish/Soviet co-production and shot like its predecessor ILYA MUROMETS in gorgeous CinemaScope, SAMPO features some of Ptushko’s most surreal and fantastical imagery: a glowing red horse plowing a field of vipers; a boat of fire with a stag’s head; a weeping mother literally walking across the sea to find her lost son. With its witch’s incantations and repeated scenes of forging magical items – “Give me fire for the furnace from the nave of the sky!” – there is a Macbeth-like occult force to the film as well, underscored by the raging blue-gray seas and rock-strewn landscapes. Previously released in the U.S. in a dubbed, butchered version as THE DAY THE EARTH FROZE (and later mocked on MST3K), SAMPO has been beautifully restored in 4K by KAVI – the Finnish National Audiovisual Institute for its first-ever American release in its original Finnish-language version by Deaf Crocodile.  (In Finnish with English subtitles.) 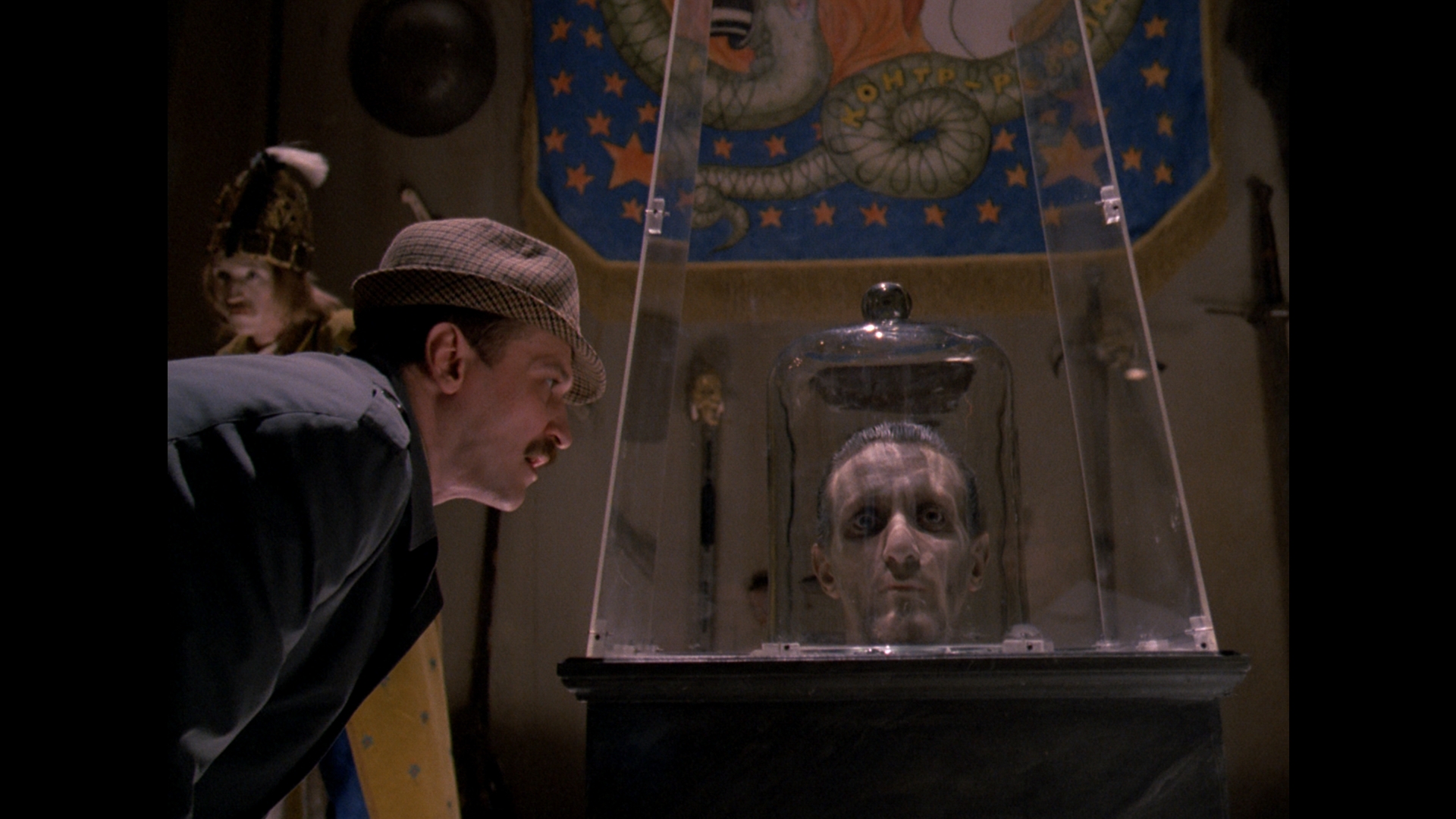 Part Kafka, part Agatha Christie, and part Monty Python, director Karen Shakhnazarov’s surreal 1988 satire of Communism ZEROGRAD (ZERO CITY) follows an Everyman engineer named Varakin (Leonid Filatov) who arrives in a remote city where nothing quite makes sense— but everyone acts as if it does. He’s quickly drawn into the investigation of the suicide (or possibly murder?) of a local restaurant chef, Nikolaev, who may (or may not) be Varakin’s missing father. The more complex and absurdist the mystery becomes, the more poignant and plaintive Varakin’s predicament. Along the way we’re treated to a bizarre and wonderful sideshow of non sequiturs that seem as if out of a Wes Anderson film, including an underground museum filled with a thousand years of real and imagined Russian history  Frozen in time, frozen far beneath the surface, the waxwork figures are strangely beautiful and forlorn, like Shakhnazarov’s marvelous and enigmatic satire of Soviet bureaucracy. With music by the great Eduard Artemyev (SOLARIS, STALKER). (In Russian with English subtitles.)

“In my opinion, the essence of the film ZERO CITY is that a person mythologizes history, distorts it,” observes the film’s director, Karen Shakhnazarov.  “And, constantly distorting history, he distorts his own life. In essence, we do not know history - it is, in principle, unknowable for us. We constantly use the past to achieve some goals in our modern life. But in this way, by distorting our past, we also distort our present. This concerns not only the USSR and not only Russia. This also applies to the United States, and France, and China, and Brazil, and in general everyone. This is common. For me, this topic is related to the very existence of man. This is the main theme of ZERO CITY for me.”