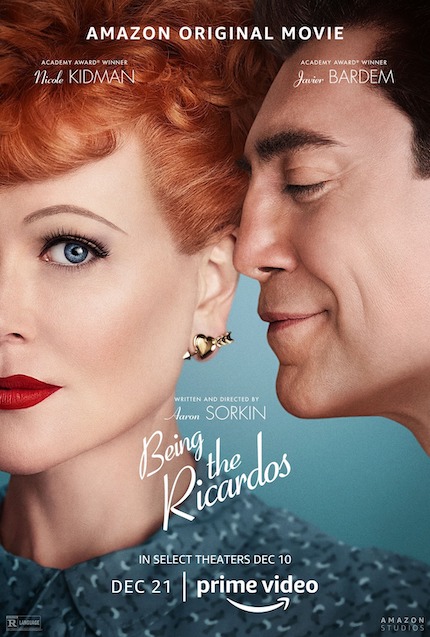 Centered on lightly fictionalized versions of the title characters, Lucille Ball (Nicole Kidman) and her husband/co-producer/co-star Desi Arnaz (Javier Bardem), during an incident- and event-filled, make-it-or-break-it week during I Love Lucy’s pivotal second season that would reconfigure network television and with it, television history as we’ve come to know it, in ways that would make it all but unrecognizable to 21st-century viewers. It’s tense, if artificially created, drama with — at least for Ball, Arnaz, and the production of I Love Lucy — the highest of personal and professional stakes.

When we first meet Lucille and Desi in Being the Ricardos, they’re about to prep for another week of rehearsals, run-throughs, and an end-of-the-week performance of I Love Lucy’s latest episode in front of a live audience. Double trouble arrives almost immediately with a tabloid article that calls out Arnaz by name for cheating on Lucille (he claims otherwise, unsurprisingly) and a blind notice in a nationally syndicated gossip column that accuses a popular, if unnamed, TV star of being a member of the American Communist Party.

Given the rabid anti-Communist hysteria of the early ‘50s, the merest hint of associating or sympathizing with American or foreign-born Communists could permanently derail the careers of established film and TV performers, forcing them to retire or find employment elsewhere (usually Europe).

Having given closed-door testimony about her association with Communism (a voter registration filled out almost fifteen years earlier) to the House Un-American Activities Committee just a week or two earlier, Ball recognizes that she’s both the unnamed TV star in the gossip column and, if outed by name, the danger it poses to her career. While Ball worries and frets about both her brief, long-ago connection to Communism (not unusual in Depression-era America) and Arnaz’s possible infidelity, the show, such as it is, must go on.

Both an astute businesswoman and a comedy savant, Ball carefully reviews every scene, every line of dialogue, and every script that crosses her desk, making Ball, by at least Sorkin’s account here, the kind of perfectionist that can be both maddening to anyone in her immediate proximity and, based on the results, completely correct in her instinctive takes on what is and isn’t funny.

Sorkin illustrates Ball’s next-level perfectionism in a recurring scene, first on the page when Ball raises objections to the dialogue and payoff during the first table read, then right on through multiple rehearsals, and ultimately the performance of the scene in question. By changing the blocking and guiding the performances in the scene, Ball spins comedic gold out of prosaic, borderline banal dialogue.

Unfortunately, it’s the only I Love Lucy scene we see from start to finish, a loss that’s keenly felt as the other events Sorkin highlights, including the Communism accusation, Arnaz’s presumed infidelity, and Ball’s pregnancy (sponsors, studio executives balk at the idea of showing Ball’s onscreen character pregnancy-associated weight gain.

Dubiously structured around faux-interviews of key players in their later years, flashbacks, and sometimes flashbacks inside flashbacks, Being the Ricardos starts in shockingly awkward, clumsy fashion. It’s the kind of structure that might work in a miniseries where teasing audiences and delaying gratification to keep them throughly engaged, but Being the Ricardos feels like Sorkin wasn’t sure what particular story he wanted to tell.

Did he want to tell Ball and Arnaz’s story? Did he want to tell a story about the early days of and compromises demanded by network TV? Always eager to inject social, political, and cultural commentary into his work, Sorkin obviously wants to do both, but the result too often feels half-hearted and unfocused.

For all of its myriad faults, from a wonky structure to the usual Sorkinisms (e.g., fast-paced, overlapping, repetitious dialogue, minimal character differentiation, subtext as text), Being the Ricardos sinks or swims on the strengths of its Oscar-winning duo, Nicole Kidman and Javier Bardem. While it'll take audiences not inconsiderable effort to get past their almost-but-not-quite similarities appearance-wise to the real-life Lucille Ball and Desi Arnaz, once (and if) audiences do, there are rewards to be found in their individual and collective performances.

Their performances are more than just how close they resemble, sound like, or move like their characters’ real-life counterparts. They’re ultimately about reflecting the complexities and contradictions in Lucille and Desi’s personalities, their personal failures, and ultimately, their professional successes.

Being the Ricardos opens theatrically in North America on Friday, December 10, and globally on Prime Video on Tuesday, December 21. 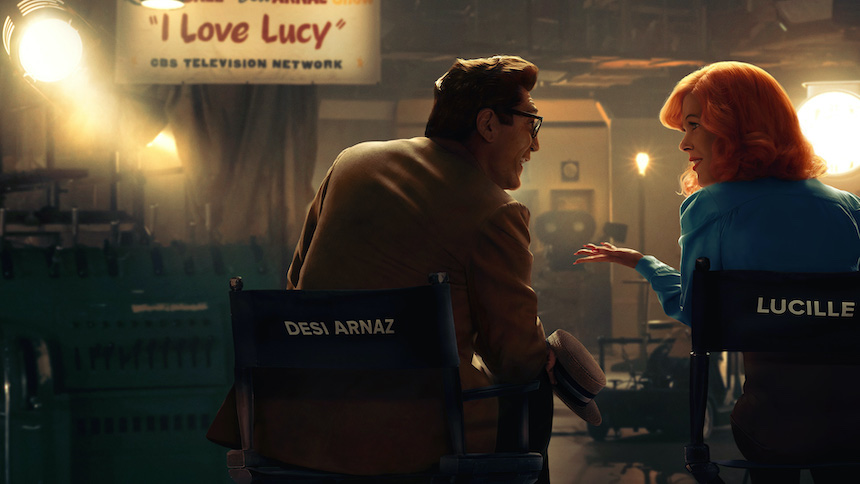