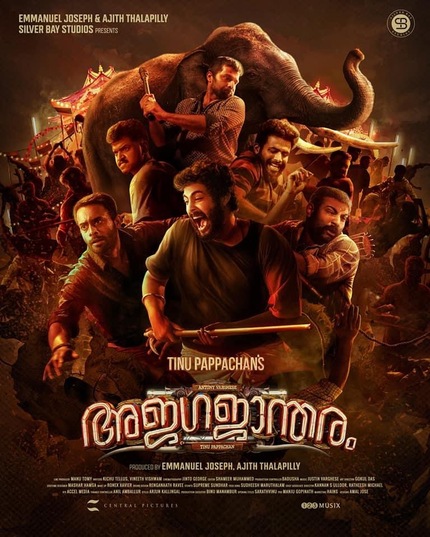 Blasting out of India's current cinema hotspot of Kerala, Tinu Pappachan's Ajagajantharam is ready to knock the action movie world on its ass. A student and collaborator of Jallikattu director, Lijo Jose Pellissary, Pappachan has worked for years as an associate director on LJP's films.

In 2018 he stepped out on his own with a prison break film called Swathanthryam Ardharithriyil (Freedom at Midnight), a distinctly action-centered take on The Shawshank Redemption, which I absolutely adored. Now he's finally returning to the director's chair with his sophmore project, Ajagajantharam.

The latest film, which doesn't really have an English translation (I looked), is the story of a festival interrupted by feuding factions bent on destroying one another. It looks abslutely insane in the best possible way.

Leading the cast is Anthony 'Pepe' Varghese, an indie star in Kerala and key figure in the ascent of both Pellissary and Pappachan's recent careers after being discovered for LJP's Angamaly Diaries and Jallikattu, along with starring in Swathanthryam Ardharithriyil.

This is easily one of my most highly anticipated films of the year, and one I've been chasing down for the better part of 10 months. To finally see the footage in this trailer paints a huge smile across my face and I cannot wait to experience this madness with a cinema audience when Ajagajantharam hits screens worldwide this December 23rd.

Don't sleep on this one, it's going to be one hell of a party!

Do you feel this content is inappropriate or infringes upon your rights? Click here to report it, or see our DMCA policy.
Tinu PappachanKichu TellusVineeth VishwamAntony VargheseLukman LukkuChemban Vinod JoseActionComedy