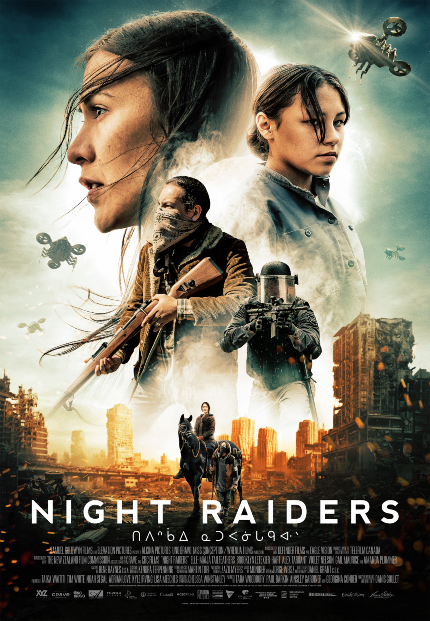 It can often feel in recent events that we are seeing the end of civilization as we know it (if not the end of human life altogether).

But too often people, especially white westerners, forget that the end of civilization effectively has happened already for countless indigneous peoples in the past few centuries, across the Americas, in Australia, New Zealand, and other parts of Oceania. Genocide has been committed, land confiscated, children stolen, and these entire ways of existing almost erased from existence.

For her first feature, filmmaker Danis Goulet dives into the deep end of a hard-hitting and (rightfully) thinly-veiled analogy; Night Raiders reads as both deeply personal and encompassing of a community still fighting for recognition. Taking a somewhat familiar dystopian sci-premise, Goulet takes the audience on a harrowing, suspenseful, and yet ultimately hopeful journey of revolution.

Sometime in the next few decades, there was a war in North America, that it seems led to at least parts of Canada being annexed to what is referred to as a 'southern state'. A wall separates the haves from the have-nots, who are separated from their homes, and more importantly, their children. Any and all children are taken to 'The Academy', which the powers-that-be claim will grant them citizenship and a better life.

Niska (Elle-Máijá Tailfeathers, Blood Quantum) has raised her daughter Waseese (Brooklyn Letexier-Hart) in the bush, but an injury forces them back to the city, and forces Niska to give her daughter up to the authorities so she can get proper medical attention. But Niska doesn't want her daughter to become a citizen, or, as it turns out, a good little soldier, and so she must find a group of rebels to help her break her daughter out.

The dystopian vision that Goulet presents will be, at least superficially, recognizable to those familiar with similar tales: people living with the bare minimum of necessities, in dirt and squalor. Yet Goulet adjusts it to fit the language of exactly how indigenous groups in Canada (and other countries) have been treated: the land is stolen, the children are stolen, the traditional way of life forbidden, and so they are left with next to nothing, and then they are themselves blamed for the conditions and resulting existence in which the authorities force them to live. This is what happens when you lose a war and your world ends.

Niska doesn't want to be a hero, she just wants her daughter back; but is it better just to accept what existence the other side has to offer, wrapped in a warm blanket which may or may not kill you, or carve out a meagre existence on your own, at least meaning that you are free? On one side are a few white people telling her maybe it's better just to adapt; on the other are a band of native rebels, to whom this fight is all too familiar, and their strength in their culture is what will sustain them and their revolution.

Meanwhile, Waseese finds herself, even among the other children of the academy who are also mainly not white, singled out as a 'savage'; her choice is to conform or die. Hers is the life of those children ripped from their parents, and Waseese instigates her own rebellion; she is a smart child, but still a child, and vulnerable to the propaganda of the state that tells her, this is her future, away from her people. Goulet's script transfers the past indignities (to put it very mildly) thrust upon indigenous people into a familiar 'fictional' dystopian setting, to make us understand: this has happened before. It can happen again.

Goulet and her team are not only telling an indigenous story, but in a way that fits with a different way of storytelling. Again, while some of the images might be familiar for the genre, the methods are not; this is where a different voice comes in. The world is stark and harsh in a different way, characters communicate in a different way. It's reformatting our ideas of genre cinema and how we can reshape it to tell new stories.

Night Raiders is a nail-biting story, filled with drama, pathos, some good action, and a little magic, the best kind that comes from a place of anger, hope, and determination.

Review originally published during the Toronto International Film Festival in September 2021. The film will open in theaters, on Digital, and On Demand via Samuel Goldwyn Films on November 12.

Do you feel this content is inappropriate or infringes upon your rights? Click here to report it, or see our DMCA policy.
Alex TarrantAmanda PlummerBrooklyn Letexier-HartCanadaDanis GouletElle-Máijá TailfeathersNew Zealand