Review: DRIVE MY CAR, Full of Humanity and Warmth

A new film by director Hamaguchi Ryûsuke stars Nishijima Hidetoshi, Miura Tôko, and Kirishima Reika. It opens in NYC on Wednesday, November 24, to be followed by a national roll-out in the U.S. 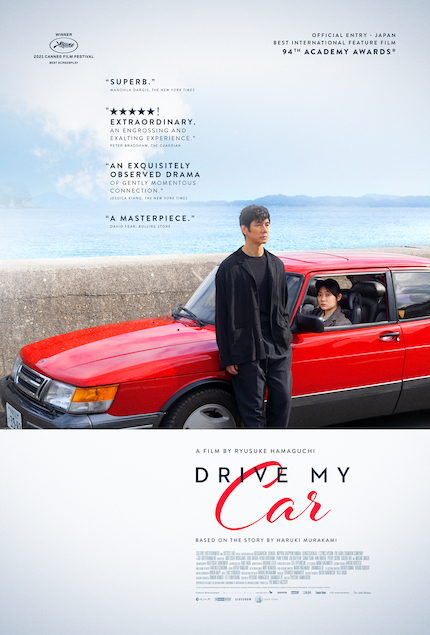 Hamaguchi Ryusuke's new film, Drive My Car, based on a short story by famed Japanese author Murakami Haruki, from the collections Men Without Women, is a skillfully adapted and directed tale of human connection and redemption.

The film more than justifies its three-hour running time, by developing relationships among its characters and audiences in a natural, unhurried pace. I can't think of any contemporary directors who have this much care and patience in creating illuminating characters like Hamaguchi.

Hamaguchi's adaptation draws on only a few things from its source material: the protagonists, Kafuku Yusuke the theater director, Misaki the young driver, Yusuke's beloved Saab Turbo 900 (color of the car is changed from yellow to red) and Uncle Vanya the play, and that's about it. Most of the supporting characters and the road trip to Hokkaido are the filmmaker's own addition (co-written as usual by his writing partner Oe Takamasa).

But what he captures so well is the essence of the Murakami's usual themes, the mystery and melancholy of life. Hamaguchi expertly expands the slight character study of its source material into a deeply humanistic film, full of beauty and grace.

Yusuke (Nishijima Hidetoshi) is a middle-aged theater director. His wife Oto (Kirishima Reika) is a TV scriptwriter and his longtime writing partner. By chance, Yusuke finds out her infidelity but says nothing because he doesn't want to disturb the peaceful and tranquil existence they share together as a couple. After she dies suddenly and takes all her secrets to the grave, though, he is left with many unanswered questions. And the credits roll and this is how Drive My Car starts, a good twenty minutes in.

Some years pass. After a minor car accident, Yusuke is diagnosed with glaucoma in one of his eyes that may lead to blindness later in life. This fact doesn't sit well with the Hiroshima cultural institute, where he is invited to put up Uncle Vanya on stage with a pan-Asian cast.

The institute insists on hiring a driver for him; it's a liability issue, they explain. Enter Misaki (Miura Toko), a tight-lipped, withdrawn young woman as a driver the organizers recommend. It takes some time for Yusuke to entrust his beloved 15-year old red Saab but Misaki's exceptional driving skills convince him to accept her as his personal driver during his artist residency in Hiroshima.

Yusuke, along with the organizers from the institute, holds a rigorous casting process. One of the actors auditioning is Oto's former lover Koji (Okada Masaki), a young hotshot actor fallen from grace after a public scandal. He follows Yusuke around, with an intention of finding out more about Oto.

Equally curious to know his wife's secrets, Yasuke surprises Koji by hiring him as Vanya, not the part he originally auditioned for. Later, in answer to an inquiry as to why he himself is not playing the title role, Yusuke replies that he doesn't want that kind of emotional exposure, because Uncle Vanya "drags out the real you."

As the multinational cast starts a table read, we hear Japanese, Mandarin, Filipino and Korean spoken, plus sign language, all mixing in to create Yusuke’s version, the pan-Asian version of Uncle Vanya, in a city where the atomic bomb fell that ended Japan's colonial past. The subtext is there for anyone who seeks it.

We get to know some of the supporting characters and their stories: there is a mute Korean actress Yoona (Park Yoorim), who turns out to be the wife of one of the event organizers. Park gives a striking performance as she emotes her lines with her expressive sign language and on stage as Sonya, the lovelorn daughter in Uncle Vanya.

To many, a car is a very personal space. But the red Saab here doesn't merely serve as one of Murakami's fetishized brand objects. As Yusuke and Misaki spend a lot of time together in the car, it becomes a communal, hallowed space for two, where they share intimate secrets of their lives. It's at once a confession booth and an altar for the dead. Its red color also stands out from the neutral color palette of the film, not ostentatiously, but rather warm and familiar.

Drive My Car is about survivor's guilt, loneliness and human connections. It's Oto's death that brings Yusuke and Koji together, mourning the death of a woman they both loved. It's Yusuke and Oto's daughter's death -- she died young and would've been 23 if she was alive -- and Misaki's mom's death in a landslide that ultimately brings Yusuke and Misaki together. And they decide to take a road trip to Hokkaido, Japan's snow-swept northern island, where Misaki's from.

The most beautiful moment in the film is the shot of Misaki and Yusuke's stretched arms with cigarettes sticking out of the sunroof of the Saab, as they smoke together, instead of opening the windows to let the smoke out.

All the small human interactions and connections have cumulative effects as the film reaches its well-earned emotional catharsis. The epilogue suggests unending friendship forged and continuing fraternity of the ones left behind, if you will. Drive My Car is a beautifully written and thoughtfully directed film full of humanity and warmth.

Review originally published during the New York Film Festival in October 2021. The film opens at Film Forum and Lincoln Center theaters in New York City on Wednesday, November 24, and will open in the following weeks at select theaters in the U.S. Visit the official site for theater locations and showtimes.

Do you feel this content is inappropriate or infringes upon your rights? Click here to report it, or see our DMCA policy.
Hidetoshi NishijimaJapanReika KirishimaRyûsuke HamaguchiTôko Miura