Jeremy Renner, Hailee Steinfeld and Vera Farmiga star in a fresh adventure from Marvel for Disney Plus. 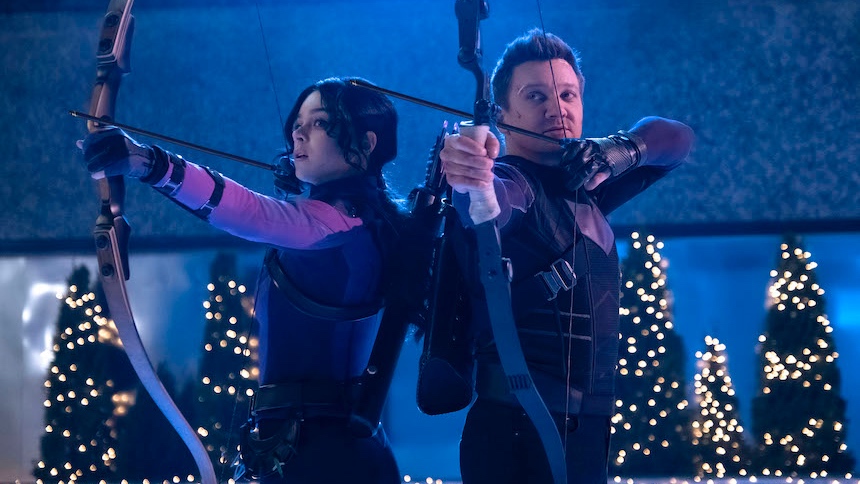 And a smashing good time for all.

Hawkeye
First two episodes begin streaming on Disney Plus as of Wednesday, November 24. Subsequent episodes in the six-episode series will be available every Wednesday.

Mismatched pairs are a dime a dozen on television shows and in the movies.

If the two leads spark in their chemistry, the result, whether a series or a motion picture, will be a sure success, according to the Law of Entertainment Tropes. Adhering to that maxim, Jeremy Renner and Hailee Steinfeld make as unlikely a pair as any I've seen in any Marvel movie in recent years, as well as most of their television shows, including this year's crop.

Retired hero Clint Bishop (Jeremy Renner) is vacationing in New York City with his three children for the Christmas holidays and can't wait to get home to his wife (Linda Cardellini) and their home on a farm. Aspiring hero Kate Bishop (Hailee Steinfeld) is 22 and completing her final year at university; she lives in NYC in her own apartment, thanks to inherited wealth, and yearns for adventure.

In the so-called Marvel Cinematic Universe, there are no coincidences, of course. So it's not surprising that Clint is Kate's favorite Avenger and she has been training for years to become an expert archer, just like Clint. She is simultaneously straining against the expectations and responsibilities of her wealth, with a widowed mother (Vera Farmiga) who has just decided to marry a man who Kate is disinclined to trust.

Manhattan is smaller than most people think, so it's also no surprise (?!) when Clint and Kate cross paths and team up to banter, fight, shoot arrows and deal with a crisis that erupts. Jeremy Renner ably inhabits the role that he's played several times before and easily steps up into the lead role in a Marvel adventure. To my mind, it helps that Hawkeye does not have superpowers; he is superbly trained and talented, and has always displayed a down-to-earth attitude. He's well-grounded and relatable, and Renner is very, very good in this iteration.

In the recent series Dickinson, Hailee Steinfeld gave a strong, rounded, and very moving performance as the 19th century poet Emily Dickinson, which allowed her to showcase her comic and dramatic talents. After all, not everybody can effortlessly sling wisecracks, crack jokes, and communicate humor, romantic longing, and dramatic intensity, solely through her face and body, if need be. In the first two episodes of Hawkeye, Steinfeld fits well into a role that could be dismissed as a 'second banana,' yet she makes it a co-lead by dint of her presence and command of the screen.

All of this is possible, though, because creator/showrunner Jonathan Igla has created a solid framework that showcases Renner, Steinfeld, and Vera Farmiga, the latter of whom supplies dramatic heft to her role as a wealthy woman who lost her first husband and is now looking to build a new part of her life with a man that she loves, while remaining in a good and healthy relationship with her young adult daughter. It's the kind of role that could be 'phoned in,' theoretically, but Vera Farmiga has never 'phoned in' any performance, which creates anticipation for what will be developed over the remaining four episodes.

Director Rhys Thomas captures a happy nighttime spirit that is practically endemic in New York City over the winter holidays. A chill is in the air, snow might fall, and crunchy action is likely to break out at any time without a moment's notice in Hawkeye. The more, the merrier.

Do you feel this content is inappropriate or infringes upon your rights? Click here to report it, or see our DMCA policy.
Disney PlusHailee SteinfeldJeremy RennerMarvelUSVera Farmiga