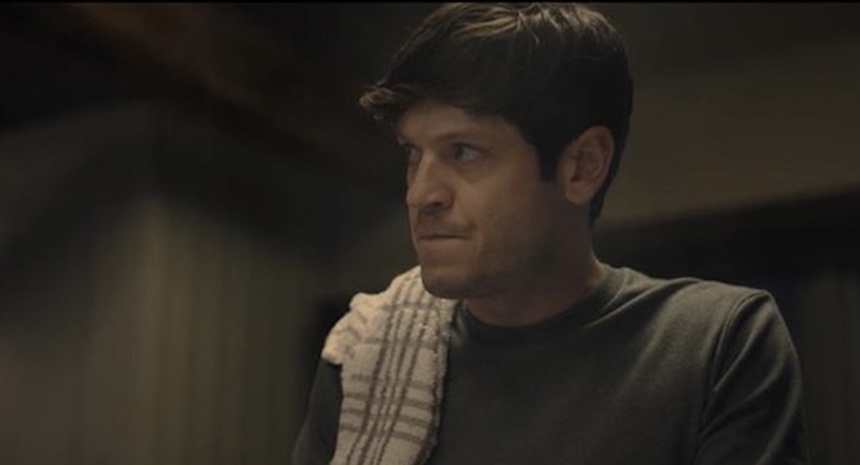 Not to be confused with Barbarians (the Netflix series), Barbarians at the Gate (Wall Street robber barons), or even Waiting for the Barbarians (the already forgotten adaptation of Nobel Prize-winning author J.M. Coetzee’s novel), the latest film with the word “Barbarians” in the title, simply called Barbarians, marks the feature-length debut of producer-turned-writer-director Charles Dorfman. The latest addition in the apparently burgeoning “dinner party from hell” sub-genre, Barbarians takes broad, nuance-free satirical swipes at white privilege, capitalistic excess, and, of course, toxic masculinity and its discontents with just enough verve, style, and thorny plot turns to keep the average horror fan modestly engaged.

Broken up into chapters announced by black-and-white title cards, Barbarians initially focuses on Adam Davies (Iwan Rheon, Game of Thrones), a TV writer with visions of grandeur, a beta-male personality, and a marriage-ready relationship with Eve Velasquez (Catalina Sandino Moreno, Maria Full of Grace), an ultra-successful, high-profile artist of fairly high repute. With Adam unenthusiastically celebrating a thirty-something birthday, an intimate dinner party is in order with their close and personal friend, Lucas (Tom Cullen), a real-estate developer with a narcissistic streak and a penchant for belittling and ridiculing Adam at every opportunity (all in “good, well-intentioned fun”), and Lucas's longtime girlfriend, Chloe (Ines Spirodonov), an art school graduate and wannabe artist who all but worships Eve.

The second chapter briefly focuses on Lucas and Chloe as they venture out to a Stonehenge-like site for a video/photo op. Not surprisingly, the local pagans aren’t particularly happy with Lucas and Chloe trespassing on their rituals, but their presence there doesn’t last long before they jump in their car and head to Adam and Eve’s current abode, a model home in Lucas’s development project, a semi-gated community set aside for the wealthy and status hungry located outside of London. As we learn early on, Lucas has a cloud hanging over his head due to a lawsuit instituted by his now ex-partner. Given Lucas’s smug, self-satisfied personality, selfishness, and a near delusional belief in his own awesomeness, it’s no surprise his aggressive, take-charge style leads to one conflict after another.

By the time the dinner party proper starts, the fault-lines between and among the four characters are fairly obvious, a credit to Dorfman’s skill as a writer-director, giving just enough backstory and detail to each character to give them dimension and depth, in turn making the rising tensions, inevitable conflicts, and revelations all the more persuasive and convincing. And that’s all before Barbarians takes an unexpected turn into entirely different genre territory, though like any good storyteller Dorfman drops enough clues and hints, plus one or two classic misdirection plays typical of the mystery genre, to make any story developments both surprising and just as importantly, believable to the average audience member.

And with essentially a four-person cast, Barbarians succeeds or fails primarily on and through the efforts of its actors. Playing against type, though far from the heroic type, Rheon adds shading and depth to a borderline unlikeable character. Cullen’s egotistical character veers deep far into unlikeable territory early on and never ventures back. It’s a testament to Cullen’s skills as a performer that he doesn’t try to make Lucas any more likable or relatable. He’s a full-on a-hole from the first moment we meet him through the last time he rages on screen. Moreno and Spirodonov have trickier, less showy roles than their counterparts. Eve and Chloe might be superficially passive, but they’re also keen observers of the destructive dynamic between mates, the dynamic between Adam and Lucas, and the toxic sludge that emanates from that dynamic.

Do you feel this content is inappropriate or infringes upon your rights? Click here to report it, or see our DMCA policy.
BarbariansCatalina Sandino MorenoCharles DorfmanIwan RheonTom CullenWill Kemp