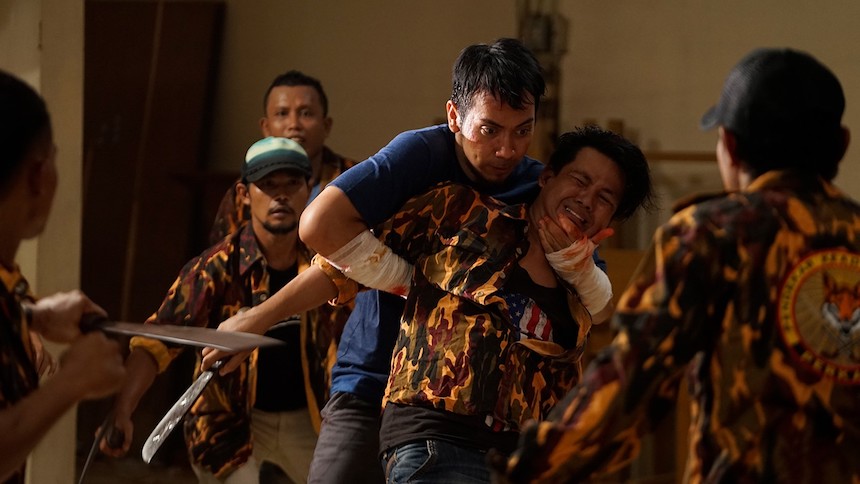 At one point in writer-director Randolph Zaini’s feature-length debut, Preman, Pak Guru (Kiki Narendra), a depth-free, mustache-twirling villain, marvels that the best laid plans of gangsters, gang bosses (like him), and a Buddha-like real-estate developer have gone sideways due to the combination of a deaf man, Sandi (Khiva Iskak, delivering a suitably intense, committed performance), his angelic preteen son, Pandu (Muzakki Ramdhan), and a gang filled with near-useless “imbeciles” who keep failing to take Sandi down. Understandable, of course, given that the series of blood-soaked events leading to that particular scene have left Guru short on disposable imbeciles and/or henchmen, Sandi, bruised, bloodied, and unsurprisingly unbowed, and a not immodest trail of civilian casualties in their wake.

Drawing obvious inspiration from Gareth Evans (The Raid) and Timo Tjahjanto (The Night Comes For Us), more for setting, character, and plot than action or action mechanics, Preman (a word essentially defined as a gangster with a self-serving form of justice) centers on the aforementioned Sandi, a deaf enforcer for a local neighborhood association turned criminal gang. With few economic opportunities, Sandi has naturally turned to a semi-lucrative life of crime, all the better to give Pandu every chance to live a different, better life. As Sandi and Pandu learn the hard way, Sandi’s hopes for his son are more dream or fantasy than actual possibility.

In Zaini’s borderline nihilistic worldview, Sandi’s life of crime, his attempts to escape that life, especially after Pandu inadvertently witnesses the cold-blooded murder of the gang’s former leader turned pacifist, Pak Haji (Egy Fedly), are practically doomed to fail. Valid or not, Sandi’s criminal life, a life of exploitation and violence, will circle back on him and anyone close to him. Sandi’s attempts to get help, first from a semi-corrupt police officer, Komandan (Gilbert Pattiruhu), and later Sandi’s estranged ex-wife and Pandu’s mother, Mayang (Putri Ayudya), ends in futility, setting up a Western-style standoff between Sandi, injured from multiple, bone-crunching, limb-breaking encounters with Guru and his henchmen, and whatever's left of Guru’s gang by the final reel.

While Evans and Tjahjanto are obvious influences for Zaini, their names mentioned in association with Preman might lead to outsized expectations. While Preman certainly has its fair share of action scenes, many, of not most featuring Sandi’s weapon of choice, a weighted flail he wields with deadly precision, the action scenes themselves tend to be nasty, brutish, but also too short for the average action enthusiast. Zaini prefers a slow-build, slow-burn approach, interweaving the action scenes with more dramatic, emotionally poignant ones between Sandi and Pandu. The finale clash certainly doesn’t disappoint, but it requires a degree of patience action fans accustomed to a knock-down, drag-out action scene every five or ten minutes.

Breaking from the blood-soaked neo-realism of his predecessors, Zaini intersperses Sandi’s real-world experiences with half-dream/half-flashback sequences that only become clear in the final moments, giving Sandi additional backstory and explaining how and why he became deaf in a childhood incident. That incident also helps to add depth to Sandi’s over-protective attitude toward Pandu (though one really isn’t needed). That backstory, though, helps to offset one of Preman’s major failings or missteps: When Guru realizes he might need outside assistance to eliminate Sandi, he enlists the help of Ramon (Revaldo), a scissor-wielding, psychopathic killer who doubles as Preman’s worst (homophobic) stereotype. That Ramon can kill with the best of them doesn’t diminish his cringe-inducing presence in the film.

Still, as a calling card/sizzle reel for a first-time writing-directing talent, Preman succeeds more often than it fails. Zaini has a well-developed eye for strong visual compositions, elegant, narrative-supporting camera moves choreographed by Zaini's cinematographer, Xing-Mai Deng (Lalo's House, Drone), and tight, fluid editing as determined by individual shots, their relationships to specific scenes and larger, interconnected sequences, and ultimately to Preman’s overarching story hoping to save himself by saving his son.

Do you feel this content is inappropriate or infringes upon your rights? Click here to report it, or see our DMCA policy.
Farell AkbarKiki NarendraMuzakki RamdhanPaul AgustaPremanRandolph ZainiRevaldoTubagus Ali