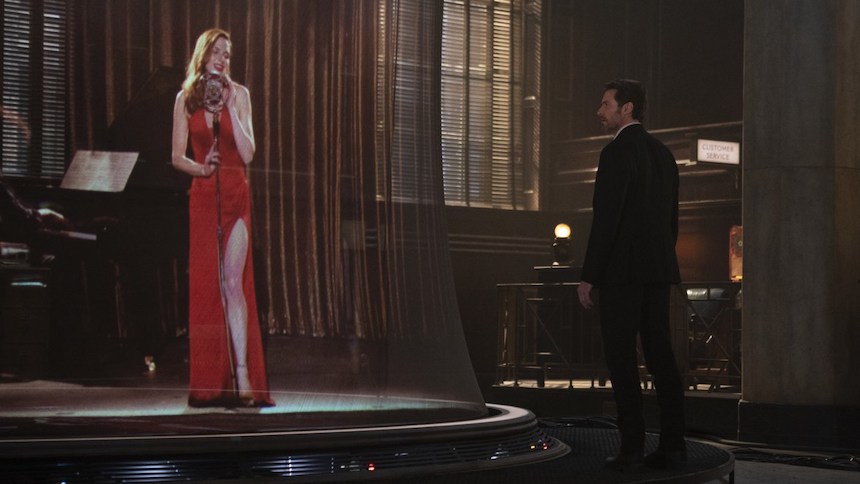 In writer-director Lisa Joy's (Westworld)’s feature-length, filmmaking debut, Reminiscence, a not particularly original, unnecessarily convoluted sci-fi/drama, it’s the (near) end of the world as we know it, but no one feels fine.

Rising oceans due to uncontrolled climate change have left Miami partly submerged, A.I.: Artificial Intelligence-style, the haves have consolidated wealth, privilege, and land at the continued expense of the increasingly dispossessed, desperate have-nots, and the only solace available for anyone with a little cash and time on their hands involves literally retreating into their own, respective pasts, thanks to advanced memory tech. So far, so familiar, and that’s the central problem in Reminiscence never overcomes.

Everything feels second-hand like we’ve seen and heard it all before. Maybe because we have in other, similarly themed science-fiction films. Chances are, we'll see it again too.

Joy centers Reminiscence and its dystopian world on a walking, talking noir stereotype, Nick Bannister (Hugh Jackman, Bad Education, Logan, The Greatest Showman), an unkempt, unshaven war veteran, memory vendor, and master exposition giver. Like one too many classic noir anti-heroes, Bannister loves to talk incessantly via voiceover narration or if anyone nearby happens to be within earshot, regardless of whether they're actually listening to him or not. He also loves to talk in faux-homespun platitudes about memory, identity, and the past.

Thanks to future-tech involving a sensory deprivation tank, a headset, and a circular, holographic stage powered by computer software, Bannister and his partner-in-non-crime/semi-sidekick, Watts (Thandiwe Newton, Mission: Impossible II), can remember practically anything for you (or them or anyone) wholesale, Strange Days- or Total Recall-style. Bannister even saves the memories to old-school-looking memory discs, the better to catalog memories for both buyers and for himself. It’s a business and a business model built, like so much corporate media product, on nostalgia, but even in dystopian times, Bannister has to double-up as a neo-noir private eye working for the Miami Dade County District Attorney, Avery Castillo (Natalie Martinez), doing the occasional odd job where his very special set of skills might aid in gathering evidence of crimes and criminality.

It’s a modest living for Bannister and Watts, right up until a cipher/object of desire/femme fatale, Mae (Rebecca Ferguson, Doctor Sleep), a nightclub singer, walks in through the bank doors where they operate their memory business silhouetted in shadow while composer Ramin Djawadi's score threatens to overwhelm the soundtrack. Mae, a modestly nightclub singer, claims she just wants a spot of help, the kind of help only Bannister and Watts’s memory machine can provide despite the seemingly prosaic nature of her request: Finding a lost set of keys.

Predictably, Bannister falls hard for the willfully enigmatic Mae — or the idealized, romanticized image of Mae he accepts uncritically — and she seems to fall equally hard for the lovelorn, easily manipulated Bannister. It’s a match made in neo-noir heaven (or hell, depending on your perspective). When Mae disappears not quite mysteriously, Bannister refuses to let go of Mae or his memories of Mae, sending him on a self-destructive spiral that only a real-world investigation, complete with pilfered/borrowed memories of Mae’s associates, can help solve.

For better or for worse  (sometimes both at the same time), Reminiscence hinges on Jackman’s front-and-center performance as the dour, dull, obsessed Bannister. Written with little depth and even less complexity, Bannister requires supreme, near-superhuman effort by Jackman to elevate him beyond a sad-sack, dullard personality. To his credit, Jackman almost succeeds, though he’s repeatedly let down by Joy’s spotty, haphazard writing, reliance on exposition, and Joy’s obvious love for noir-inflected voiceover narration/speech.

Ferguson fares little better as the chanteuse of Bannister’s holographic dreams, though again, that’s more a function of a broad, thinly written screenplay than any fault in Ferguson’s performance. The same analysis doesn’t, however, apply to Newton's performance and a character who makes an outsized impact in fewer scenes than she deserves.

Reminiscence opens in theaters today (Friday, August 20), and is also available to stream on HBO Max.