Emilia Jones, Marlee Matlin and Troy Kotsur star in the drama, directed by Sian Heder, and streaming on Apple TV+ as of August 13. 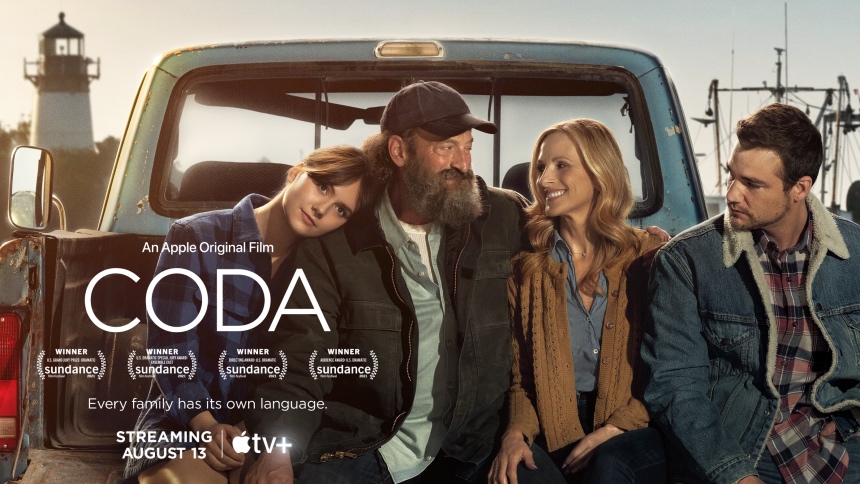 Deservedly or not, the word “crowd-pleaser” tends to have a negative connotation, situating a film’s potential popularity with broad demographic appeal, simple, easy-to-understand narratives, and emotionally cathartic endings.

But in the second year of a global pandemic, a Before Times reminder, when phrases like “social distancing,” “masking up,” and “infection rates,” had little or different meaning, a crowd-pleaser about a young woman finding her way — and her voice, literally — in life is something to wholeheartedly, unreservedly, and unironically embrace, even if only as a temporary respite from the setbacks and reversals inherent in surviving, if not exactly thriving, through the second year of a seemingly never-ending pandemic.

As the only hearing-abled person in her immediate family, Ruby serves as the family’s sole conduit to the hearing world, acting as the family's “voice" whenever the need arises for the family to interact with anyone outside of the deaf community. Ruby’s function as the family’s ears becomes all the more important as the family’s fishing business flounders from a combination of fierce competition, over-fishing, and price-gouging local buyers eager to take advantage of Frank and Leo.

What Ruby wants to really do, of course, has nothing to do with the family business: She wants to sing, but she doesn’t believe enough in herself to try to sing professionally. Only the presence of her longtime crush, Miles (Ferdia Walsh-Peelo, Sing Street), in the school choir convinces the usually reticent, introspective Ruby to impulsively join too. It takes a solo audition with the choir’s flamboyantly elegant instructor, Bernardo Villalobos (Eugenio Derbez), to change Ruby’s mind about both her place in the choir and a potential future outside the family or the local fishing village where she’s spent the entirety of her short life.

Almost immediately, however, Heder introduces the conflict between Ruby’s dream and her family’s needs, setting up a collision course between the two that ends more than somewhat predictably with a shamelessly manipulative, if no less effective, audition for the opportunity to study at the prestigious Berklee School of Music.

On a purely narrative level, CODA is nothing if not predictable or formulaic. From Ruby’s outsider status, eliciting instant audience sympathy, to the conflict between her dreams and family obligations, to the sweetly chaste, burgeoning romance with Miles, through Ruby’s up-and-down relationship with the stern, if caring, choir instructor, right on through the audition (a competition of sorts) and the not unexpected result, and everything in between, audiences will be able to anticipate every plot turn and every emotional beat with near 100% accuracy.

Almost none of that matters, though, thanks to lived-in, grounded performances from a wonderfully calibrated cast working on the same wavelength, seemingly throwaway comedy bits (like Ruby’s parents rapid-fire, ribald badinage, becoming a running joke in the process), and its emphasis on finding simple pleasures in physical labor, music, and the push-pull intimacy inherent in families both in the abstract and in reality.

Review originally published during the Sundance Film Festival in February 2021. The film will be available to watch globally on the Apple TV+ streaming service as of Friday, August 13, 2021.

Do you feel this content is inappropriate or infringes upon your rights? Click here to report it, or see our DMCA policy.
Apple TV+Emilia JonesFranceMarlee MatlinTroy KotsurUS