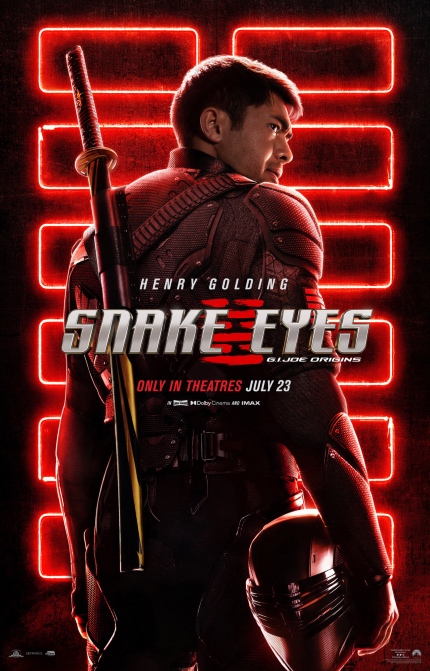 With a history going back six-plus decades, toys dating back just as long, comic books, animated shows, and two middling, half-forgotten franchise wannabes in four years, a big-screen comeback of sorts for Hasbro and its G.I. Joe line was all but inevitable.

After all, as children in the '80s repeatedly learned from the animated series, knowing was half the battle. The other half? Lasers, of course. Spoiler: The attempted comeback may have been inevitable, but success, commercial or otherwise, certainly wasn’t.

The clumsily named result, Snake Eyes: G.I. Joe Origins (apparently inspired by X-Men Origins: Wolverine in name, if not in spirit)), a prequel, spin-off, and a reboot rolled up in one, won’t win any awards, but in just a few scenes, it suggests there’s a viable, sustainable franchise in there somewhere if you have the patience to look hard enough and you’re willing to forgive more than a few missteps.

When we meet the title character, Snake Eyes (Henry Goulding, Crazy Rich Asians), he’s gone from a Boy With No Name to an unseen Teen With No Name to a Man With No Name who favors underground fight clubs to work out his angst, anger, and thirst for vengeance for the 20-year-old murder of his beloved father. In one of the film’s many head-scratching conceits, Snake Eyes refuses to take a normal name, even an assumed one, meaning everyone just nods their heads and calls him “Snake” or don’t call him anything at all. Somehow too, Snake has managed to survive into adulthood without identity papers or IDs of any kind (unless, of course, he actually uses “Snake” and “Eyes” when he signs his name on credit card receipts or job applications).

There’s a simple, if again, slightly cringe-inducing reason why Snake Eyes goes by Snake and Eyes: Two decades earlier, he witnessed his father murdered by a European-accented villain in a fur-lined coat and a fetish for throwing dice. His father literally lost his life on a dice roll.

In the world of Snake Eyes: G.I. Joe Origins, that’s more than enough to turn the title character into a one-man vengeance machine, but only if he can find the (other) man with no name who murdered his father. Since Snake can’t, he takes a low-level job with a Yakuza leader, Kenta (Takehiro Hira), who promises Snake the name, identity, and location of his father’s murder. So far, so predictable, if more than a little challenging where plot logic is involved.

After saving Tommy (Andrew Koji, Warrior), the once and future Storm Shadow, from execution by Kenta, Tommy’s cousin, and an exile due to his murderous plot to oust Tommy from his position as the heir apparent to the top spot in the Arashikage Clan, a super-secret ancient Japanese clan apparently dedicated to keeping Japan safe and secure from its enemies, domestic and foreign, Snake becomes Tommy’s best friend (forever), his confidante/protector, and Arashikage intern, undergoing modest training before undergoing three, potentially life-threatening challenges. If Snake passes all three challenges, he’s an Arashikage. If he doesn’t, he’s snake food (literally).

Still driven by vengeance, however, Snake’s loyalties remain a figurative toss-up or throw of the die. On the one ninja hand, Kenta offers Snake the chance to avenge his father and overcome a lifetime of regret and survivor’s guilt.

On the other, Tommy and the Arashikage Clan offer Snake everything he needs, but grudgingly refuses to accept: A family of his own, bound by loyalty, honor, and integrity. Snake’s decision, all-but-guaranteed by Tommy’s status as Storm Shadow, makes him less a hero or anti-hero than his own worst enemy. It also makes him slightly less relatable, a risk director Robert Schwentke (Der Hauptmann, R.I.P.D., Red) and his screenwriting team, Evan Spiliotopoulos, Joe Shrapnel, and Anna Waterhouse, eagerly embrace for most of Snake Eyes: G.I. Joe Origins’s running time.

Rigid corporate mandates, however, dictated that Snake Eyes: G.I. Joe Origins also integrate the Joes of the title, another super-secret, non-governmental organization dedicated to righting wrongs and safeguarding the world from the evil machinations of their chaos-minded rivals, Cobra. About halfway through, Snake Eyes: G.I. Joe Origins haphazardly introduces the Joes via Scarlett (Samara Weaving), allying herself with the Arashikage Clan (because reasons), and the Baroness (Úrsula Corberó), a Cobra rep eager to help Kenta and the Yakuza destroy the Arashikage and thus weaken the Joes (or something). Both subtract far from than they add to the central conflict, but lifelong G.I. Joe fans will likely applaud their awkward presence and the partial switch from elegant, sword-based fighting to a mix of sword-fighting and reckless, indiscriminate use of guns-and-ammo firepower.

Besides the overly convoluted plotting needed to shoehorn in the Joes and Cobra, Snake Eyes: G.I. Joe Origins suffers from an overabundance of chaotic, impossible-to-follow action that’s also the opposite of epic until an overly delayed climax, and underwhelming origin story for its title character (through no fault of a game Goulding whose charisma helps to hide occasionally cringe-worthy dialogue and overcome a shallowly defined, underwritten character), and a far more compelling anti-hero in Tommy / Storm Shadow who basically steals Snake Eyes out from under the title character. Tommy gets the more intriguing storyline and like any good anti-hero, redemption always seems possible, if also perpetually out of reach. 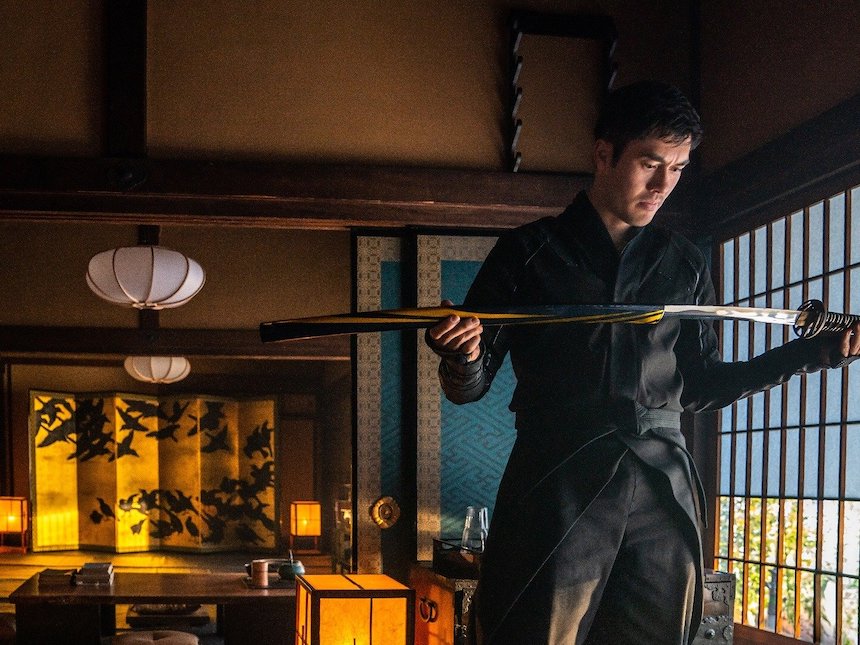