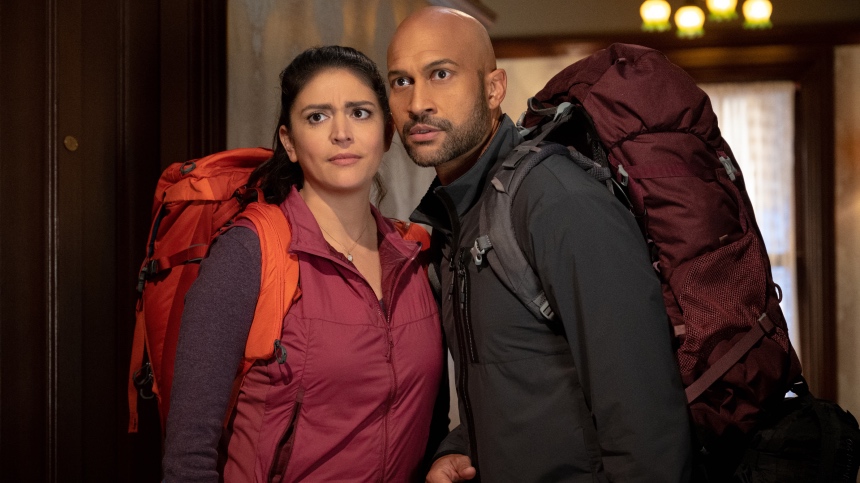 Sing, dance, and schmaltz, under a giant rainbow.

The idea of a self-conscious romantic-comedy musical is very appealing in a contemporary age of cynical contempt for tried and true tropes that began to be established about a century ago.

The reality of Schmigadoon!, created by Cinco Paul and Ken Daurio, will likely be most appealing to fans of post-modern musicals, which lovingly comment upon and ridicule overly-familiar twists and turns, while also celebrating their intrinsic, socially-conservative values, delivered in the guise of occasionally sniggering, double-entendre laden songs, score, and scripts. Directed by former cinematographer Barry Sonnenfeld, the series pleasantly harkens back to his earlier days helming colorful features such Get Shorty (1995) and Men in Black (1997), ensuring a snappy pace and storytelling in which major points are often communicated visually.

Cinco Paul serves as showrunner; he wrote all the songs and co-wrote the scripts with Ken Daurio. Songwriters/screenwriting partners Paul and Daurio have collaborated together since 1999, notably on Despicable Me (2010) and other successful Hollywood productions. In this series, Cecily Strong, an undervalued member of the Saturday Night Live comedy ensemble, takes the lead role as Melissa, who has always searched for true love.

She thinks she has found it in Josh (Keegan-Michael Key), but after several years of living together, their partnership is foundering. She pushes them to go on a trip as a couple that will supposedly help them to find true love. Instead, they stumble across a bridge where they discover a town called Schmigadoon, which looks to be a mid-20th small town recreated for entertainment purposes, and soon find themselves living in a real-life (such as it is) musical, where the only means of escape is to find true love.

But what is true love?

Keegan-Michael Key is reliably terrific, portraying his character as a warmhearted man who is happy with his lot in life, yet is empathetic toward his partner's goals, even if he does not always (or often) understand them. Cecily Strong is outstanding, capturing the frustration, rage, hopes and dreams of her character, Melissa, who may feel that she has been stranded in a 21st century that is far different than she wishes.

Still, Melissa remains determined to persevere, and not to 'settle' for less than she needs and wants. She is a hero for our time, even if she has to spend some time in Schmigadoon to prove it.

Do you feel this content is inappropriate or infringes upon your rights? Click here to report it, or see our DMCA policy.
Apple TV+Cecily StrongCinco PaulKeegan-Michael KeyUS