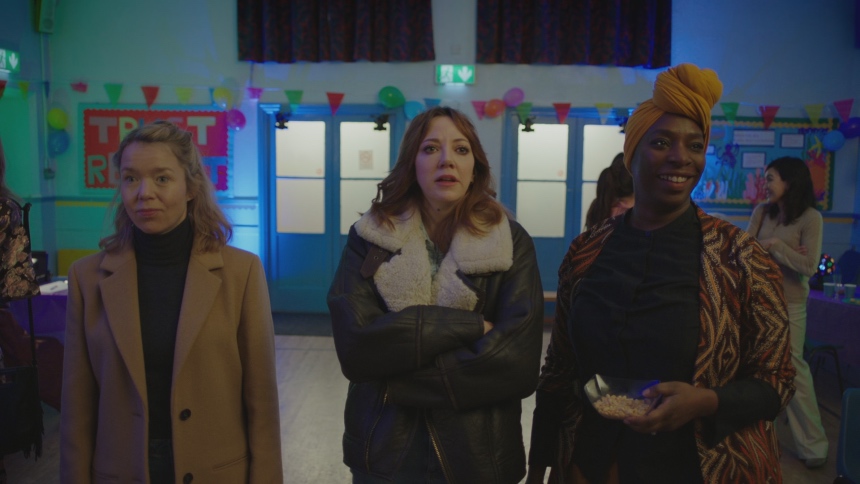 Motherland
All episodes of the series, including the newly-available five-episode Season 3, are now streaming exclusively on Sundance Now.

It must be very scary to be a mother, I imagine, especially in today's climate of fear and trembling. And what to do when parents, friends, strangers, and, yes, your own children constantly annoy and harass you for your undivided attention?

Perhaps it resembles the world in which Motherland is located, a foreign country where a small group of mothers (and one father) have come to rely upon each other for company, commiseration, and compassion. No, strike that last word; perhaps empathy is a more accurate description. No, strike that; perhaps people who are willing to allow you to pour out your soul to them each and every day, and forget it as soon as you say it.

Created by Sharon Horgan, Graham Linehan, Helen Serafiniwicz, and Holly Walsh, the dialogue is exceedingly clever and brazenly comic, revolving around characters who are recognizable in their rumpled reactions to the common challenges faced every single day -- really, every single hour -- by mothers everywhere. I'm late to the show, and I live in Texas, and have no experience living in England, so a fair number of references fly over my head, yet most of the insights shared by the writing team, and deftly performed by the cast, are spot on and easy to understand.

Or, at least, relate to at some level. Julia (Anna Maxwell Martin) is learning to accept that her somewhat dotty mother Marion (Ellie Harrington) may have moved in on a permanent basis. Amanda (Lucy Punch) struggles to reconcile herself to the reality that her divorce has indeed changed her life forever. Liz (Diane Morgan) is faced with returning to the workforce as a single mother. Kevin (Paul Ready) desperately wants to reconcile with his wife. Meg (Tanya Moodie) confronts a very serious health issue. Anne (Phillipa Dunne) sees her family growing, but not by her choice.

The lead actors all have combustible chemistry; it's easy to imagine them in real life, talking and arguing and bickering and bantering. For me, the most startling performance here comes from Anna Maxwell Martin, solely because I was not familiar with her talents until I saw her in a guest role on the sterling crime-drama series Line of Duty, in which she plays a stern, no-nonsense commanding officer. So I was gobsmacked to see her as a frustrated mum, but she is totally convincing.

It may sound crowded, and it is, but then so is life itself, even for those of us who don't live in Motherland, the series, or the varying family structures that are depicted and deconstructed. Frequently coarse and impressively smart, the dialogue often sounds like overheard exchanges from the street or from next door, the type that no one would want to be recorded and replicated.

That's probably what makes the series so funny, and provokes unrestrained laughter, even when it doesn't seem possible that any show could wring anything humorous about particular situations that may be universal, but unacknowledged. After all, few people will readily admit that watching other people in awkward, regrettable situations yields a surfeit of rich humor.