Families. They either lift you up or they f*ck you up. Rarely is it anything in the middle.

The latter observation — if it’s an observation at all and not an object-lesson based on historical evidence — lies at the heart of writer-director Jonathan Cuartas’s impressive feature-length debut, My Heart Can't Beat Unless You Tell It To, a quietly wrenching, bleakly ruminative horror-drama. In Cuartas’s adaptation of his own award-winning short, Karu, family means never having to say you’re sorry for dispatching stray, random people to feed your chronically ill brother the human blood that he needs to survive another day, night, or week. For the family at the center of My Heart Can't Beat Unless You Tell It To, every tomorrow is like yesterday and every yesterday is like today (ad infinitum and ad nauseum).

When we meet Dwight (Patrick Fugit, Almost Famous), he’s driving around a familiar, if nondescript city (Salt Lake City, Utah, the home of actor-producer Fugit), hunting for a potential victim to feed his sickly younger brother, Thomas (Owen Campbell). Dwight draws his victims from members of any number of marginalized communities -- the homeless, undocumented immigrants, and sex workers -- where their absence will go unnoticed, if not outright ignored, by the authorities, allowing them to hunt and kill with impunity.

For Dwight, Thomas, and their sister, Jessie (Ingrid Sophie Schram), anyone outside the family is either a potential victim or an existential threat, at least until Dwight, slowly collapsing under the weight of the murders he’s committed to keep Thomas alive, begins to imagine a life free and clear, unencumbered by the stifling, suffocating obligations he has toward Thomas and Jessie.

Obsessed with keeping Thomas alive and the family together (a difference without distinction for her), Jessie immediately notices the change in Dwight’s behavior, up to and including Dwight’s undefined, undefinable relationship with Pam (Katie Preston), a sex worker, and later, a despairing Thomas’ attempt to develop something approaching a friendship with a curious neighbor, Turner (Judah Bateman). Both decisions by Dwight and Thomas threaten to upend the unsteady equilibrium in the family unit and quite possibly prove Jessie’s fears of discovery, arrest, and Thomas’s likely demise closer to a reality no one wants to acknowledge, let alone consider possible.

My Heart Can't Beat Unless You Tell It To unfolds in a deliberate, methodical pace, tracing the rhythms, rituals, and routines of Dwight, Thomas, and Jessie before introducing variables (Dwight’s increasing doubts and desires to live apart, a potential victim who’s anything but, Jessie’s ruthlessness, and Thomas’s growing despair at his unique condition) and allowing those variables to interact over the course of its perfectly calibrated running time. Each character decision reveals another complex, sometimes contradictory layer of psychology, making them, if not exactly relatable given their serial killer status, then at least understandable, sacrificing the lives of others to keep Thomas alive at practically any cost.

Embracing an art-horror style that emphasizes mood, atmosphere, and an elliptical approach to storytelling (e.g., Let the Right One In, Martin) rather than the shocks, scares, or gore of mainstream horror, Cuartas, ably assisted by brother Michael on cinematography and brother Rodrigo on production design, repeatedly proves himself a deft, nimble director, fully aware of the possibilities and limits of the genre and exploiting them to tell a singularly enthralling, unsettling story. Ultimately, My Heart Can't Beat Unless You Tell It To functions as both a worthy genre entry and as a metaphorical domestic drama that sensitively explores the emotional, mental, and psychological costs on oft-ignored caregivers.

My Heart Can’t Beat Unless You Tell It To screened recently at the Tribeca Festival and will be released June 25 in theaters and on VOD, via Dark Sky Films.

My Heart Can't Beat Unless You Tell It To 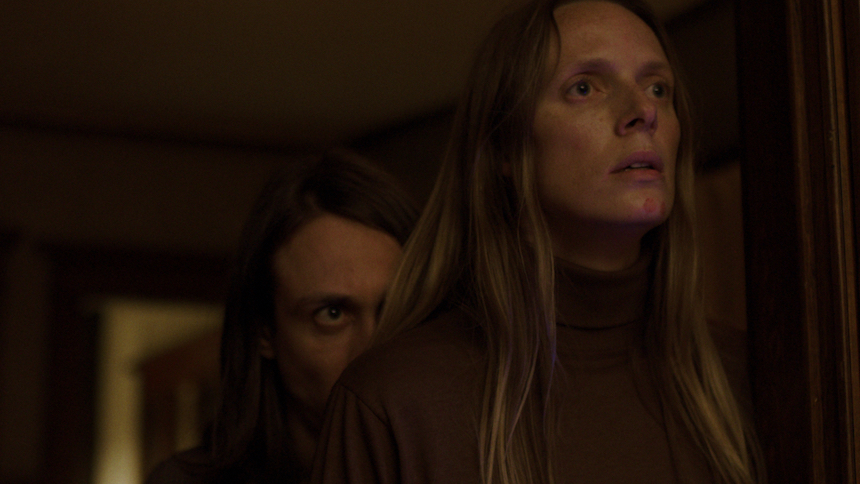 Do you feel this content is inappropriate or infringes upon your rights? Click here to report it, or see our DMCA policy.
Ingrid Sophie SchramJonathan CuartasMy Heart Can't Beat Unless You Tell It ToOwen CampbellPatrick FugitMoises L. TovarDramaHorror

More about My Heart Can't Beat Unless You Tell It To