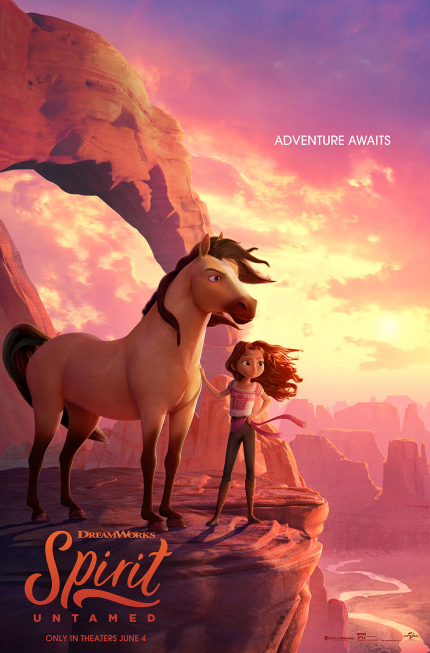 Galloping ghosts! The enjoyable case of a feature film that isn't as original as I hoped it would be.

Spirit Untamed
The film will open in theaters via Dreamworks on June 4, 2021.

As an animation addict, I was eager to tuck into Spirit Untamed, especially since Westerns are not commonly animated for the big screen. Indeed, the animated Old West is glorious to behold as a beautiful background for the story that unfolds. Yet certain reservations eventually began to make me question my enjoyment of the film.

Before that rose up, I was properly absorbed in the story of young Lucky Prescott (Isabela Merced), the daughter of famed horse-stunt performer Milagro Navarro (Eiza Gonzales). Ten years after Milagro passes off the scene, Lucky has grown up into a spunky young person who takes after her late mother: she loves horses, she loves adventure, and she doesn't like to obey authority.

This drives Lucky's grandfather to distraction, especially since he's running for political office, prompting her live-in Aunt Cora (Julianne Moore) to take her from the big city back home to Miradero, a small town in the West where she can't possibly get into any trouble that will affect her grandfather's chances for election. It will also allow her to get to know her birth father, Jim Prescott (Jake Gyllenhaal), and learn why he sent her away to live with her grandparents after his wife's untimely passing.

On the train near Miradero, Lucky spies a pack of wild horses running free aside the train, and yearns to ride them. Before that can happen, though, Lucky meets her laconic father and makes friends with similar-aged girls Pru Granger (Marsai Martin), daughter of stable owner (Andre Braugher), and Abigail Stone (Mckenna Grace), who proves to be the most silly of the three. They quickly form a bond of friendship, cemented with care, consideration, and the same sense of humor.

Unrealistically, perhaps, I wanted more to be included about their varying identities, since that is an essential element in growing up and coming of age. That is not the arena in which Spirit Untamed is playing, however. After watching the film to completion, I saw in the end credits that it is an adaptation of Spirit Riding Free, a spin-off series that was developed by Aury Wellington and first made available on Netflix in 2017. (Several subsequent seasons have also been made available on Netflix.) The series drew its inspiration from the original feature film Spirit: Stallion of the Cimarron (2002).

Aha! In that light, I appreciated more what the filmmakers behind Spirit Untamed accomplished. Directed by Elaine Bogen, and co-directed by Ennio Torresan Jr., based on a screenplay by Aury Wellington and Kristin Hahn, the film draws within the lines, so to speak, of the source material, resulting in an animated adventure that is easy to watch and teaches practical life lessons about friendships and family.

As an adult, I also appreciated the presence of Walton Goggins as Hendricks, who is the leader of the horse wranglers, yet has also been involved with possible illegal activities. Goggins lends his role a bit of menace, but not too much menace, which fits well in a motion picture that is targeted at younger viewers.

Never insulting the intelligence of anyone, Spirit Untamed chooses to gently showcase people of color among its heroic cast, and that's not a bad thing for people like me who love animated films in the modern day. But we always want and deserve more, especially now.

Do you feel this content is inappropriate or infringes upon your rights? Click here to report it, or see our DMCA policy.
Andre BraughteranimationIsabela MercedJake GyllenhaalJulianne MooreMarsai MartinMckenna GraceUSWalton Goggins