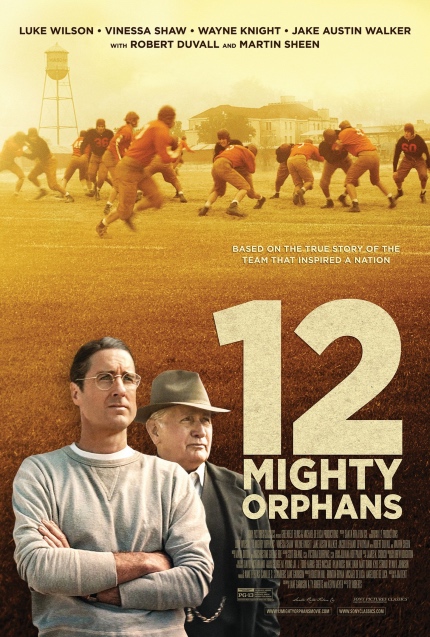 Discrimination comes in many forms and colors.

12 Mighty Orphans
The film opens in Texas theaters on June 11 via Sony Pictures Classics. It will expand throughout the U.S. on June 18.

Here in North Texas, where I have lived for the past 15 years, discrimination still runs riot, although it's more tamped down and discreet these days.

When I first visited Fort Worth in the early 90s, my friends, including a mixed-race couple, told me about the subtle forms of racism that they had seen manifested among neighbors and business acquaintances. Although I am a person of mixed race myself, I never sensed or experienced any discrimination myself, probably because I appear to be a white person on the outside, my family name is also Anglo, and my accent makes me sound like most other people. I am, in fact, half-Mexican.

Therefore, I may be more sensitive to the subtle forms of discrimination that are all around me. I mention all this to set up my feelings upon watching 12 Mighty Orphans, which does not deal directly with the discrimination against people of color, gender identity, or any related modern emotional diseases. Instead, the sophomore feature film by director Ty Roberts rewinds the clock to 1938, when Fort Worth was primarily a bustling cattle town, and zeroes in on an orphanage.

The Masonic Home decides to hire Rusty Russell (Luke Wilson), a veteran of the first World War and a football coach with some experience in Texas, to establish and coach a football team for eligible teenage boys. The Masonic Home is led by disreputable characters, including Frank Wynn (Wayne Knight), a cartoonishly evil and greedy overseer of a printing facility at the orphanage where the boys are forced to work.

Rusty, his wife Juanita (Vinessa Shaw) and their young daughter are warmly greeted only by Doc Hall (Martin Shaw), a crusty physician and nascent assistant football coach. Always manifesting a positive attitude, despite the nightmares he still suffers from his military service, Rusty proceeds to form a team, in partnership with the supportive Doc, despite a severe lack of equipment supplied by the orphanage, and Frank Wynn's continuing efforts to undermine every thing he does for his own greedy purposes.

Juanita works full-time as a schoolteacher at the orphanage, while also managing their household. Rusty works as a schoolteacher as well; he gets added emotional support from Doc, who is, as it happens, an alcoholic. (That gets its own subtle subplot.) Meanwhile, Rusty reveals his own past as an orphan, which makes him even more empathetic to the boys at the school who are struggling to forge their own identities during the Great Depression.

They are playing football teams composed of players who have been playing football for years. To make things more challenging, the orphanage team can only field 12 players, which means just about everyone must play both offense and defense, which means they are physically exhausting themselves each and every time they take the field.

Based on a book by Jim Dent and inspired by true events, 12 Mighty Orphans is, at heart, a sports drama, and I can well imagine that a portion of potential viewers might immediately turn away from that. (I'm a lifelong fan and follower of American football, and also a resident of North Texas, two things that made me automatically interested in the story.) And the story cannot help but play into common 'underdog sports movie' tropes -- we don't see many movies about overpowering favorites, do we?

Several elements, however, make 12 Mighty Orphans stand out. First is the comfortable chemistry between Luke Wilson and Martin Sheen; it's respectable and often quite funny, but they clearly have the spark of genuine friendship. Second is the cameo appearance of Robert Duvall, who only appears briefly, yet adds to the weight of the film simply by his presence. Third is the subdued performance by Treat Williams as Amon Carter, publisher of the Fort Worth Star-Telegram, which was the biggest newspaper in the South in the 1930s.

And fourth is the idea that discrimination exists in many forms and colors. In 1938, among white people, those who were impoverished were generally looked down upon by anyone of any means, and if the impoverished people were also without their mother and their father, so much the worst for them and their prospects to climb up to a point where they could stand on their own and sustain themselves.

I wish the movie had paid more than scant attention to the Mexican team members, though they are present and included in the closing credits. Well, one thing at a time. (Yes, I know it's been more than 80 years. Progress marches slowly here in Texas.) For now, 12 Mighty Orphans revives a long-lost story of a team of undermanned young people coached by outstanding adults, overcoming the discrimination against by many people, all told in a wholesome, upbuilding manner. 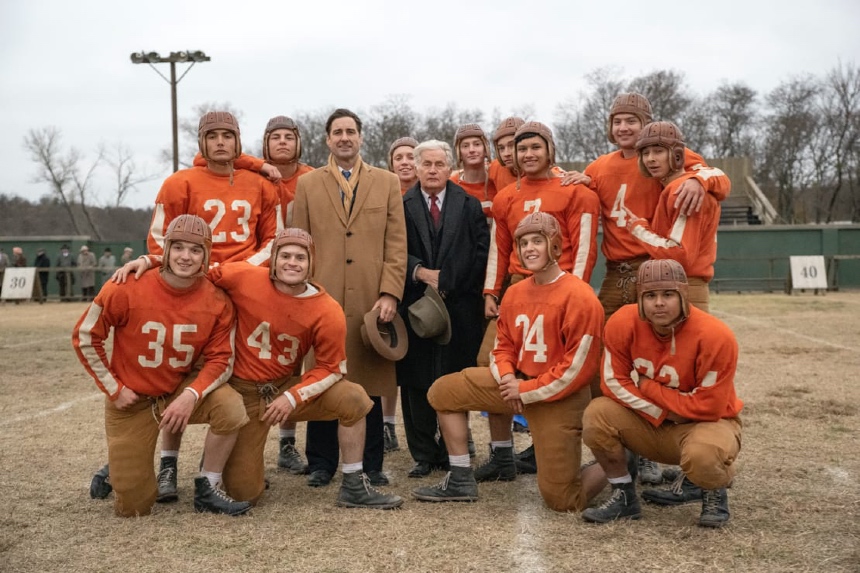 Do you feel this content is inappropriate or infringes upon your rights? Click here to report it, or see our DMCA policy.
Luke WilsonMartin SheenRobert DuvallUSVinessa ShawWayne Knight