Among his most recognized works is his debut Dog Soldiers, part of the werewolf subgenre, although without focusing on the classic transformation. The protagonists are a group of soldiers who end up fighting for their lives against a pack of ferocious werewolves in the Scottish Highlands. It's a fast-paced mix of action, horror, gore and black humor with practical effects.

Later Marshall wrote and directed The Descent, in my opinion his best film so far, where a group of female friends with a taste for extreme activities live a nightmare in an unexplored cave. With impeccable photography – playing with the darkness of the place and the different sources of light (flares, for example) – The Descent is another violent clash between humans and extraordinary creatures; here they're humanoids adapted to the depth of the cave: they’re blind and only require their sense of hearing to become predators.

Marshall's career continued with his most ambitious film until then: Doomsday. An over-the-top and violent combination of genres and elements: science fiction and action that draws from a Mad Maxian post-apocalypse with cannibals, medieval knights and castles. Watching Doomsday in 2021 is particularly fascinating because Marshall built a world based on a virus that causes an epidemic. The so-called "Reaper Virus" turns Scotland into a quarantine zone, surrounded by a wall and abandoned by the United Kingdom until the apparent end of its entire population. The main plot unfolds 25 years after this, in 2033, when the virus reappears in decaying London.

Those elements connect it directly to The Reckoning, his most recent film. Its context is the Great Plague of London in 1665. Marshall stated, in an interview with ScreenAnarchy, that the COVID-19 pandemic has made him reexamine both films.

While his adaptation of Hellboy also refers to the resurgence of the plague in England and the threat of an epidemic, Marshall asked to ignore “Hellboy in that regard because I didn’t come up with any of that stuff." [It’s the only film in his filmography that he didn’t write.] "But I’ve reconsidered both Doomsday and The Reckoning. There were articles in the news about them closing the border between England and Scotland, which is exactly what happens in Doomsday. It suddenly makes you think: oh wow, it’s more prescient.”

On The Reckoning, the director commented: “We wrote it in 2018 and shot it in the summer of 2019, with no clue of what was around the corner. Then the following year, 2020, not unused that there’re people wearing masks. Now is more relevant because of the whole plague aspect, but one thing I would point out is that it’s not a movie about the plague, it just acts as a backdrop.”

The Reckoning actually portrays the witch hunt and is based on true events. At that time, according to Marshall, people believed that the bubonic plague was the product of the Devil and his followers. “Now there’s kind of witch hunts online, there’s religious fervor about masks or the plague being the work of the Devil. All the stuff that happened back then just in a different form. People aren’t at the local tavern conspiring, [saying] there’s a witch in the community, it’s happening on the Internet. It’s still the same thing."

In this film, Charlotte Kirk plays Grace, who lives in a rural area with her husband (Joe Anderson) and their baby girl. Her husband is struck at the beginning by the disease and decides to take his life to protect his family. Consequently, Grace is seen by Squire Pendleton (Steven Waddington) as the perfect victim: he desires sexual favors in exchange for rent payments. Grace is unwilling and defends herself against a sexual abuse attempt. This prompts Pendleton to point out at the nearby town tavern that there’s something wicked about Grace. A few words are enough for the villagers to start accusing the protagonist of witchcraft and having a pact with the Devil.

It’s not the first reference to witchcraft in Marshall's work. In Centurion – based on the legend of a legion of soldiers from the Roman Empire who succumbed to the Picts in northern Britain – the Roman played by Michael Fassbender meets an exiled “witch” (Imogen Poots). The main villain in Hellboy is a witch (Milla Jovovich) from the time of King Arthur, recently resurrected and who intends to bring back the creatures of darkness. Marshall's approach to witches in The Reckoning strays entirely from the fantastic.

“My friend Ed (Edward Evers-Swindell) brought me a rough outline for a movie based on a witch trial. Myself and Charlotte started researching the period and read a lot of books about the witch hunts and the witch trial. The more we got into it, the more interesting it became, the more I got hooked on the idea of telling a story that stayed in the real world as much as possible, to deal more with the psychological breakdown than with anything too supernatural.

"This thing really happened, it was nearly 500,000 confirmed, though some people say it’s closer to a million women who were tried, tortured and executed for a crime that doesn’t actually exists. I thought, OK, if I’m going to tell the story I got to be honest to it, it needed a more dramatic approach and that was the plan”, assured Marshall.

After the visit of several villagers, dressed in masks from the plague period, the worst awaits our protagonist: a trial that’s actually a torture to get her confession and send her to the stake for witchcraft. As a child she went through something similar: her mother (Emma Campbell Jones) was tortured and forced to confess by John Moorcroft (Sean Pertwee), a notorious witchfinder who reencounters with Grace.

The figure of the witchfinder takes us back to Witchfinder General, directed by Michael Reeves and part of the so-called "Unholy Trinity" that led to the popular use of the term folk horror. In that brutal masterpiece, Vincent Price plays Matthew Hopkins, a character based on a real witchfinder who worked during the English Civil War. Marshall stressed on this potential influence that he totally avoided “watching Witchfinder General. It’s a film I know very well, I’ve watched many times in my life but I haven’t seen it for, I don’t know, 20 years. I deliberately didn’t watch it before going into this, I didn’t want to be lead down that path too strongly.

"At least for the first act, before Grace gets taken and put in the dungeons, my biggest influences were actually Westerns, like Once Upon a Time in the West. I wanted to embrace the fact that we were going to be shooting in Hungary, in the height of summer, with heat, dust, characters riding on horses, with big hats and flowing coats; we had pistols, saloons, western houses in there. I thought about totally embrace this and shoot it like a western.” 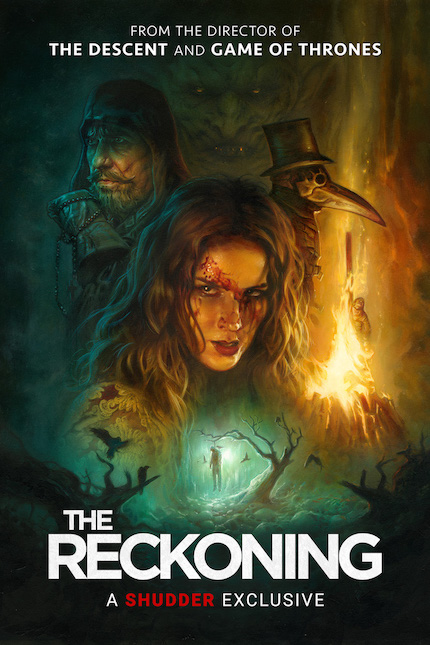 The Reckoning inevitably addresses the days of torture that Grace suffers, in an attempt by Moorcroft and his assistant Ursula (Suzanne Magowan) – a woman who survived the stake and is now convinced that she was "purified" – to break her physically and psychologically.

Being questioned about these harsh sequences, Marshall replied: “Yeah, it was physically, mentally and emotionally tough, especially on Charlotte. She had to spend the whole day strapped into this horrific torture device kind of thing. But I didn’t want to make a torture movie, I didn’t want to make a movie that focused or in any way glamorized or exploited the torture. It’s enough to know what’s going to happen, it’s enough to see the torture devices or have a description of what they’re for. That tells you everything you need to know, you don’t need to hang on the actual torture itself. So we never did. Let the audience and imagination fill in the blanks.”

The film chooses to show a woman with incredible willpower. In addition to her physical harm, she experiences nightmarish images of Lucifer (Ian Whyte) in her mind. However, Grace always keeps in mind the words of her mother before confessing to save her: "Don't let anyone tell you who you are." She's willing to sacrifice everything for the well-being of her little baby.

Already in films like The Descent and Doomsday, Marshall had portrayed strong women, who resist and fight back. “I want them to triumph at the end somehow, to get revenge or to fight back. That’s the kind of movie that I want to see, I’ve always make movies that I want to watch. What Grace goes through, she deserves some kind of retribution and justice at the end. These guys deserve to suffer. Even though The Reckoning is a little bit open-ended”, Marshall stated.

The Reckoning is now streaming on Shudder.