Directed by Jean-François Laguionie and Xavier Picard, the gorgeous animated tale from France is delightfully surprising and kindly philosophical. 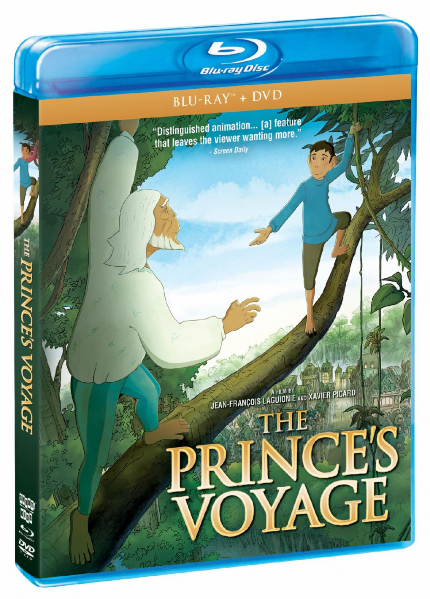 Crossing the sea is only the beginning.

The Prince's Voyage (Le voyage du prince)
The film releases on a two-disc Blu-ray Combo Pack (Blu-ray + DVD) and Digital on May 18, 2021, via Shout! Studios.

Arriving on a distant shore, the monkey awakens in a strange new world. (Country, to be precise.)

In his own land, the aging Laurent (Enrico Di Giovanni) was a prince. Found by young Tom (Thomas Sagols), the lad tends to him on the beach and then brings him home to his parents, devoted scientists Abervrach (Gabriel Le Doze) and Elizabeth (Marie-Madeleine Burguet-Le Doze), who are, initially, more curious about him than anything else, and thus treat him as just another strange monkey as they subject him to various tests and experiments.

It seems that Abervrach was banished from public life due to his insistence that other civilizations exist. His theory was roundly ridiculed, resulting in his retreat to an old, dilapidated museum, where he and his botanist wife Elizabeth continue their scientific work. Abervrach hopes one day to be accepted back into proper society, such as it is, and seizes upon Laurent as possible plausible proof of his theory.

Meanwhile, Elizabeth is consumed with her experiments to find a method of beating back the implacable forest, which threatens their country, in a neat twist on the devastation brought on by deforestation. Laurent toys with Avervrach and Elizabeth and their single-minded obsessions.

He is content to survey his options and plot escape in the future, even as he befriends the inquisitive and open young Tom. In turn, Tom is happy to introduce Laurent to the secret wonders and mysteries of his country.

Without becoming an unabashed action adventure, The Prince's Voyage is filled with action, as well as insightful character insights, humorous asides, and thoughtful contemplation on the need to live in and adapt to one's environment, whatever that might be.

Do you feel this content is inappropriate or infringes upon your rights? Click here to report it, or see our DMCA policy.
animatedFranceJean-François LaguionieShout StudiosXavier Picard