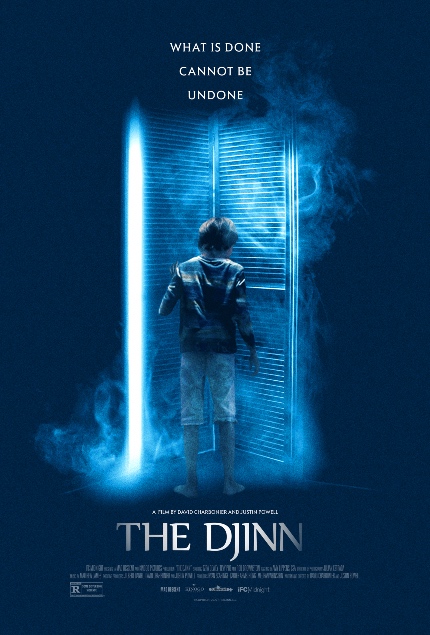 From The Monkey’s Paw to Deathdream through Wishmaster, Wish Upon, and even the recent Wonder Woman 1984, fictional characters have learned and relearned a grim message central to fairy/folk tales the Western world over: Be careful what you wish for because you just might get it and in getting it, you might lose everything, up to and including your eternal soul (or a reasonable facsimile), in the process. In the right directorial hands, the “wish-fulfillment as a terrible, no-good, awful choice” can make for a reactionary morality play (reject the status quo at your own mortal peril) and/or compelling supernatural horror.

For Dylan Jacobs (Ezra Dewey), the mute central character in a Grimm fairly tale by filmmaking team David Charbonier and Justin Powell (The Boy Behind the Door), The Djinn, the not-so-chance discovery of an ancient, cloth-bound, Necronomicon-inspired book, “The Book of Shadows,” filled with spells and incantations, in the new, dusty apartment Dylan shares with his radio DJ father, Michael (Rob Brownstein), all but seals his fate.

Three months away from a wrenching family tragedy involving the sudden loss of his mother, Michelle (Tevy Poe), Dylan enters The Djinn as a classic archetype of an adolescent boy or girl defined, shaped, and limited by trauma. That trauma, however, also makes him vulnerable to the machinations and manipulations of a supernatural entity.

With Dylan’s father working an overnight shift and alone in an apartment that’s simultaneously too small and too large, Dylan gives in to a mix of curiosity, boredom, and literal wish-fulfillment, reading the “Wish of Desire” from the ancient book. Despite following the spell’s directions, including have a clock handy, a candle lit, and offering a few drops of blood, nothing seems to happen, at least not right away.

Dylan doesn’t get his voice back, but in short order, electronic appliances begin to go haywire and Dylan finds himself threatened by the newly awakened title character, a shape-shifting genie of ancient vintage who stalks and pursues Dylan with an almost freakish lack of urgency, presumably because the unnamed djinn believes nothing can or will stop him from snatching Dylan’s soul before the clock strikes midnight.

Charbonier and Powell set ground rules for Dylan and the djinn that occasionally stumble into vagueness or ambiguity, though careful viewers should be able to follow one of Charbonier and Powell’s key rules for their djinn: When shape-shifting into mortal form, the djinn can be injured or wounded, slowing it down, if not outright defeating it. That, in turn, leads to several, slow-building, slow-building set pieces, each one dependent on Dylan’s ingenuity to escape the djinn’s clutches for a few minutes at a time. It helps, of course, that Charbonier and Powell’s djinn seems to be practically blind in whatever form it takes, giving Dylan the chance to choose between flight or fight as a response at any one time.

What the djinn shape-shifts into, however, is almost as important thematically as it is narratively: The djinn initially takes the form of a deceased, escaped convict (culled from a newspaper headline), before shifting into the face and form of the apartment’s previous occupant and later, Dylan’s mother, repeatedly recreating their last moments together in an effort to break Dylan’s resolve and/or will. Given the connection to Dylan’s central trauma, the scenes between Dylan and the djinn-as-Dylan’s-mom predictably pack the biggest emotional punches in the film, though The Djinn has other, not-so-positive intentions for the Dylan character than whether he resolves or overcomes his guilt over his mother’s departure, ultimately delivering a bleak, stinging coda likely to split viewers.

Divisive ending or not, however, it’s difficult not to admire what Charbonier and Powell have achieved with The Djinn, working within the confines of a single-setting, a micro-budget, and minimal effects. Relying on a child actor to carry a film with almost dialogue was also a risky proposition, but Charbonier and Powell chose extremely well. Also the star of their soon-to-be-released second film, The Boy Behind the Door, Dewey delivers a grounded, naturalistic performance, essential for a film tied so closely to a single character’s singular journey.

The Djinn is now playing in select movie theaters and via VOD on May 14, 2021, via IFC Midnight. 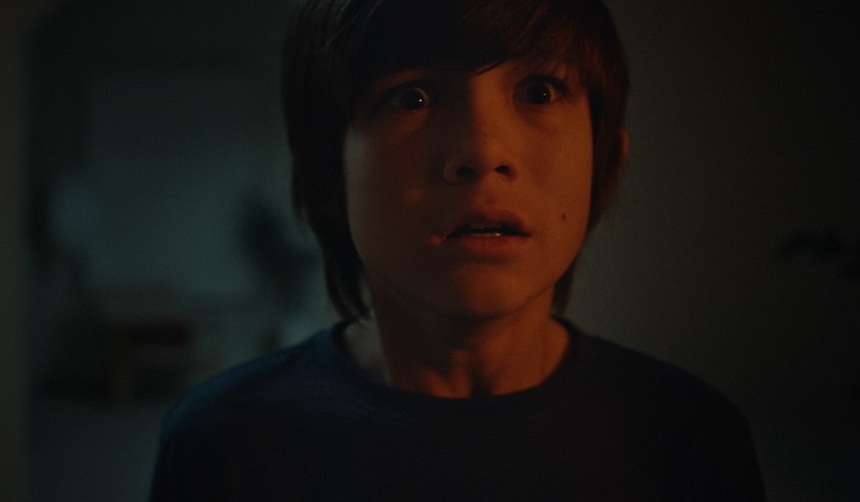 Do you feel this content is inappropriate or infringes upon your rights? Click here to report it, or see our DMCA policy.
David CharbonierEzra DeweyJustin PowellRob BrownsteinTevy PoeUS

More about The Djinn