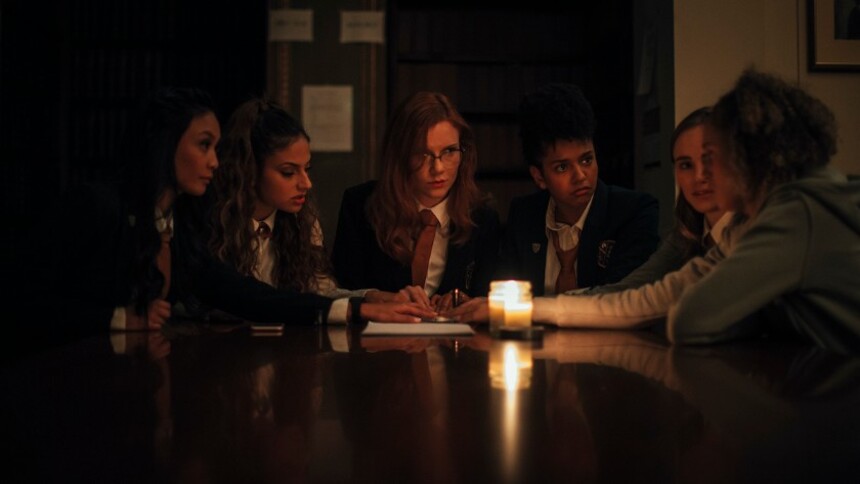 If You’re Next can be classified as a subversive reimagining of the final girl trope and The Guest was something fun along the lines of The Terminator by way of John Carpenter, then Seance, Simon Barrett’s first solo feature-length gig, could be described as a whodunit in the guise of a whatdunit: a film that channels slashers and throws in ghosts for good measure.

Like his previous screenplays directed by Adam Wingard, Seance tries to tap into something creative by opening up a dialogue with the past, but Barrett’s debut is disappointingly undone by a farfetched story and flat characters, resulting in a genre film that mistakes outdatedness for old-fashioned fun.

Things are off to a familiar start at the Edelvine Academy for Girls when a nightly summoning ritual intended as a prank seems to go wrong and actually conjures a spirit that kills one of the students. Or is there more to it than meets the eye?

Shortly after, Camille (Suki Waterhouse) transfers to the prestigious school and, following a brusque welcome at the hands of the local Mean Girls clique, finds herself participating in their seance to help uncover the truth. What initially appears supernatural may be more grounded as the girls get picked off one by one and a serial killer’s foul play is suspected, by the viewer at least (the manner in which Seance’s police investigation drifts in and out of focus requires a colossal suspension of disbelief).

Since Seance has little going for it beyond its intertwining mysteries -- is there a ghost and/or are their killers on the prowl at the academy? -- this review won’t spoil the finer details of the film’s reveals, even if most of them feel less like satisfying twists than as confirmation of what you’ve guessed all along. The bigger issue is that it’s simply no fun to speculate about the perpetrator’s identity when most of the cast feels so interchangeable that it doesn’t matter if some characters die and others might have a hand in their undoing. Sadly, Seance is fundamentally flawed as a murder mystery, with dull characters and uncompelling red herrings.

None of the actors make a good impression, but this is a consequence of the writing letting them down in the first place. It’s the type of film where you’re always at pains to remember someone’s name since characters have no depth. On top of that, most exhibit a tendency to wander off by themselves, which invariably results in them adding to the academy’s rising body count.

It’s almost tempting to think that Seance is deliberately setting the stage of the slasher formula in order to send up the genre, but this is no Scream, a film in which -- in case you’ve forgotten -- even cannon-fodder characters were at least given a handful of memorable one-liners before biting the dust. Instead of Kevin Williams’ satire and postmodern perspective mixed with Wes Craven’s deftly executed suspense, Seance means well as a faithful love letter but, in the process, copies some of the genre’s laziest conventions while lacking the chills and thrills that elevated its best outings.

Naturally (and thankfully), Barrett is smart enough to avoid the sexism of sleazy slashers and the third act sees him tiptoeing back to his You’re Next inkwell for momentary fun. While it ultimately amounts to little more than a feeble stab at female empowerment, and it’s hard to imagine viewers have come to care about anyone’s fate, Barrett briefly recaptures our attention so we can enjoy the climax’s adrenaline burst, as well as Seance’s bloodiest and most inspired kill.

With tension in short supply throughout, Seance could’ve benefited from humorous touches to liven things up a little. Such moments could’ve also given the lackluster killings a much-needed jolt by way of contrast, but Barrett doesn’t really know how to write comedy and his actors certainly can’t deliver it, although a romantic revelation during the film’s cringeworthy epilogue may elicit more than an unintentional chuckle or two.

Despite the negative tone of this review, Seance isn’t a complete failure, just an anemic film in which all too often it feels like we’re going through the motions. Much of it is capably (if unmemorably) lensed by Possessor DOP Karim Hussain and Sicker Man’s musical contributions, a mix of classical instruments and synths, sounds in tune with Barrett’s attempt at creating an original riff on the whodunit trope. It’s just that given Barrett’s pedigree as a screenwriter, this debut doesn’t deliver on its implicit promise.

As an old school love letter to the genre cinema of decades past, perhaps the film’s greatest accomplishment is that it triggers fond memories of one of Wes Craven’s most iconic slashers. And while it’s certainly appropriate for a film titled Seance to summon at least one spirit, it seems unlikely that Barrett had intended for his debut to be eclipsed by its presence.

RLJE Films and Shudder will release Seance in Theaters, On Demand and Digital on May 21, 2021.

Do you feel this content is inappropriate or infringes upon your rights? Click here to report it, or see our DMCA policy.
Adam WingardSimon BarrettSuki WaterhouseUS