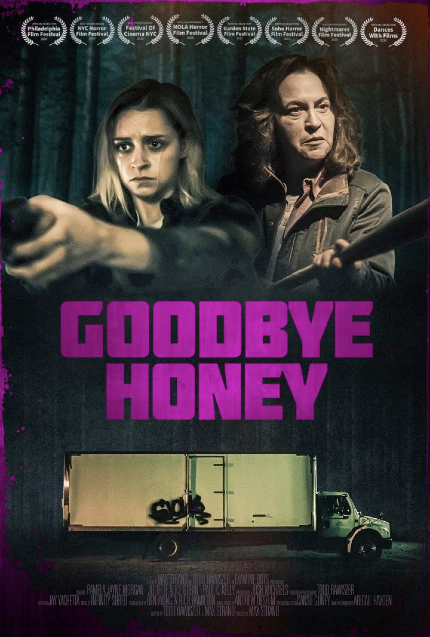 The first few minutes of any film usually set the tone, and Goodbye Honey starts at a fever pitch, as a desperate young woman attempts to escape.

The who, what, where, why, and when will have to wait until later. The next sequence finds truck driver Dawn (Pamela Jayne Morgan) in the middle of the night, on an isolated road, ready to pull over and stop for a bit, whereupon she is soon beset by another desperate young woman (Juliette Gobin), who pleads for a cell phone and a quick ride away.

Theoretically, desperation compounded by mystery can make for a compelling narrative, even without much logic or little sense, and that is certainly true here. My pulse raced, as it's easy to guess that the second desperate young woman, Phoebe, is somehow related to the first desperate young woman, united in desperation, and perhaps she is the only one -- or the first one -- to escape whatever situation bound them in desperation.

Dawn is set up to be Phoebe's ally. Understandably wary of a stranger, Dawn is also understandably protective of her truck, as well as her cargo: she is a responsible business person, and Phoebe is acting very strangely. Dawn's compassion for a fellow human being in trouble wins out, motivating her further.

Then some perplexing choices made by writers Todd Rawiszer and Max Strand, which feel like they were engineered to maximize a minimum of locations, threaten to derail the thriller elements. Directed by Max Strand, the production looks quite good, courtesy of director of photography Todd Rawiszer, and the editing is generally propulsive.

The performances are also strong, even if the characters themselves make for a troublesome night. Rafe Soule and Jake Laurence show up out of nowhere, and proceed to do their best to prove that they are loathsome creeps who exist solely to extend the running time.

Meanwhile, Dawn and Phoebe form a tenuous bond that flickers continually from fear to friendship, as they make the most of their circumstances. When the true evil villain is revealed, it's through another series of mysterious scenes that, again, make a lot out of a little. Which is admirable on the part of the filmmakers, even if it makes it especially difficult as a viewer. Maybe that's the point?

Do you feel this content is inappropriate or infringes upon your rights? Click here to report it, or see our DMCA policy.
Juliette GobinMax StrandPamela Jayne MorganUS