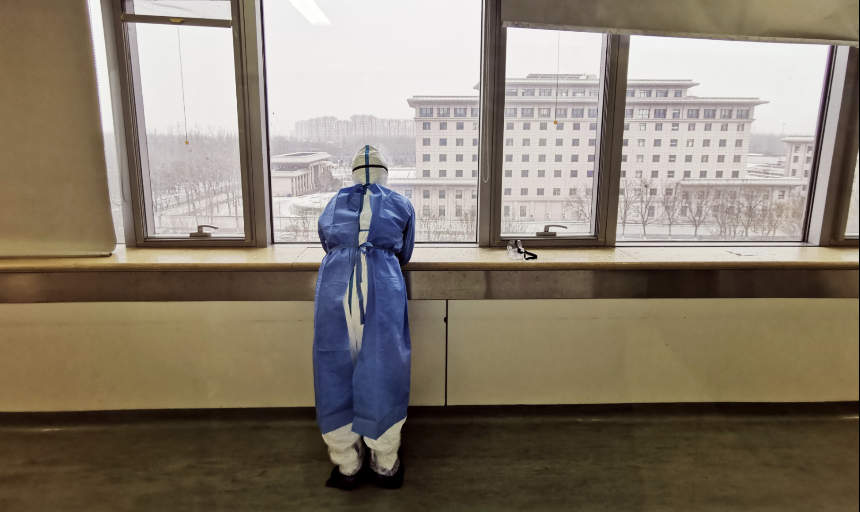 Yung Chang's quietly effective documentary Wuhan Wuhan is both a time travelling machine and an empathy machine. Straddling the cinematic line between Frederick Wiseman and Robert Altman, high praise that is both obvious and merited, Chang's film takes us back to February 2020, when Wuhan was just getting the initial wave of COVID-19, the worlds first battle with the novel coronavirus, under some semblance of control. The city is locked down and unsettlingly quiet, you are now, no doubt, familiar with images of urban landscapes with little traffic or people. The 11-million citizen city has 5 hospitals, as well as several hastily converted/erected field quarantine zones. All remain a whirr of activity in stark contrast to the rest of Wuhan. Beeping monitor machines give these places the ambience of a modern gambling house, or a high stakes, high stress command centre. In a way it is both.

Volunteer Psychologist Guiqing Zhang arrives, early in the film, at Fangcang field hospital. She asks the check-in medical worker where she should start to administer therapy. The response she gets might as well be the thesis of the film, "Start anywhere. Everyone here needs therapy. Including me." The exhaustion is palpable. We, the audience, [specifically the people in Ontario catching the film virtually as part of the 2021 edition of the HotDocs film festival, while COVID-19 is at the peak of a devastating third overwhelming local hospitals who have resorted to ICU triage due to overcapacity] have the Cassandra-like vision of knowing that this kind of emotional stress and perpetual mental exhaustion is going to be here for the long haul.

And yet, in spite of this, Wuhan Wuhan is a profoundly uplifting experience. I have not the slightest idea how Chang and his team managed to get cameras where they got them. They capture intimacy without interfering with it, acts of normalcy in strange times. Document details in subtle and clever ways more associated with narrative, fictional cinema. The whole craft of assembly feel both completely natural, and cinematic, simultaneously. Actor, martial arts master and fight choreographer Donnie Yen is Executive Producer here, and you feel the spirit or the confidence of a wuxia spirit out of the frame.

It is this unfussy competence of both the filmmaking team and their subjects that build upon each other to make this one of, if not the, crowning achievements of pandemic-filmmaking and storytelling. For what appears to be a few days duration only in the middle of a health crisis and extreme lockdown that the film takes place, it appears as though his cameras are always in the right place, capturing the right thing at the right time. It is satisfyingly zen.

The through-line in the film is Yin, a factory worker who has reinvented himself as a Uber-driver-of-sorts for front line medical staff. He drives the professionals back and forth to their long shifts at the various hospitals. His wife, Xu, is feeling the stress of his risk-taking volunteerism as she is on the verge of giving birth to their first child. She takes the stress out on Yin, a bit of passive aggressive marital sniping, likely as a result of the anxieties of heading to the hospital herself in the middle of a modern medical crisis. Xu is all the more real in her naked immaturity.  And yet, banality of marriage between the two, shown in the form of both their morning routine, and a 'nesting quest' for a crib - difficult to obtain during the shortages of an extended lockdown - as much on display, as the resilient intimacy of the couple during their eventual childbirth experience.

Meanwhile, there is Dr. Xiannian Zheng, one of the chief medical officers of Hospital 5. He is struggling with finding quality PPE for his team, even as he is dealing with a compromised bedside manner where his patients know him only by his voice. One of several interesting details is that the medical staff write their name and job title on their 'bunny suits' in black Sharpie pen. Later some of his staff will tape printed photos of themselves to their torso. The takeaway at this point is that every patient takes medical credentials, and treatment on faith.

Wuhan Wuhan is a film about people and observation of process; not politics. The only political moment shows a series of nurses and medical staff dropping flowers and genuflecting at the memorial of Dr. Li Wenliang. Moments later, a scene as effecting of a visual detail, is hairstylists who volunteer their services to cut the hair of the medical workers (outside the hospital) to make googles and masks fit better. Tears for the falling locks of hair are shed by Nurse Susu. The barber tells her that she is the fifth person to cry that day. It is still early. Later we will see Susu competently dealing with a challenging senior citizen patient, who tears off his oxygen mask in the ICU and is obstinate about eating. The man even breaks the fourth wall (one of only a precious few times that remind us we are watching a documentary) to tell the camera crew, "Keep filming, I will dead in a few days."  Meanwhile Susu is getting abuse from her own small children for working instead of being home. And yet, through tears, she does her job with a steady grace.

There are other threads, all woven together like Short Cuts (or Magnolia) only in half the time, the film is a sharp 90 minutes, and where the earthquake (or falling frogs) in those dramatic tapestries, is the relentless fog of war of the pandemic. As the Wuhan Wuhan occasionally nudges us, this is the barely the first scene of the first act, in a long global epic. One that still continues. And yes, we all need therapy. This documentary is as good as any session out there.

The film ends with a text with the number of babies that were born during China, and the worlds first battle with the virus in Wuhan. If there is a more pragmatic or hopeful way of framing our ongoing struggle, I cannot think of a better one.

Do you feel this content is inappropriate or infringes upon your rights? Click here to report it, or see our DMCA policy.
CityCoronavirusDocumentaryDONNA GIGLIOTTIDonnie YenEmpathyHospitalHotDocsHUALUNHubeiKARTEMQUIN FILMSPandemicVirusWuhanYung Chang