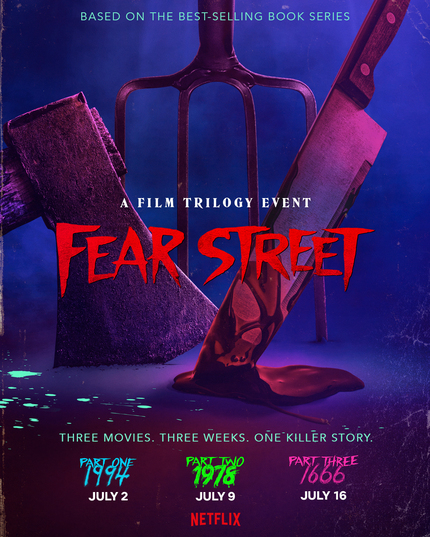 If, like me, you were a big fan of Leigh Janiak's amazing feature debut Honeymoon - about a man who watched his new wife slowly become a monster - then you've also been eagerly anticipating her follow-up. And while she's dabbled a bit in television, she's returning to cinema (proverbially at least) with not one, not two, but three feature films.

Fear Street, based on the popular book series by R.L. Stine, sets itself in the same small town of Shadyside, each film taking place in a different year; and these are significant years. 1994, which saw the resurgence of the slasher subgenre; 1978, the original slasher era, and 1666, when all sort of supernatural shenanigans were taking place in New England.

In 1994, a group of teenagers discovers that the terrifying events that have haunted their town for generations may all be connected — and that they may be the next targets. Based on R.L. Stine’s best selling horror series, the trilogy follows the nightmare through Shadyside’s sinister history.

Releasing on Netflix over three consecutive weeks in July, it would seem that the films are amping up the terror and horror of the teen-aimed books, which should make for some scary summer nights. Check out the first teaser below.