Now Streaming: ATTACK OF THE DEMONS Fits Perfectly on Shudder

Directed by Eric Power, the small-town setting allows for an unexpected horror uprising in an animated, bloody surprise. 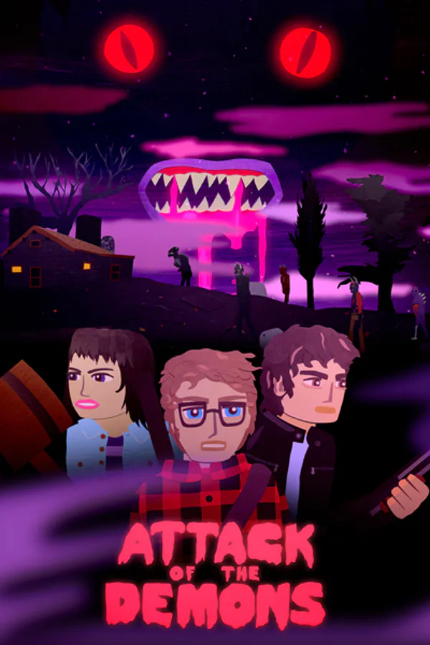 Attack of the Demons
Now streaming on Shudder.

Joining a tiny sub-genre of indie animated horror movies, Attack of the Demons grabs attention initially by playing very much like a classic indie from the 90s: all talk and no action, revolving around a small group of twenty-something characters who still don't know what they want to do with their adult lives.

The opening scene, though, makes clear that this is a horror movie in which bad things happen to good (or at least unsuspecting) people. The sequences that follow allow us to get to know the somewhat geeky, somewhat nerdy lead characters, who may be aimless yet are quite likable and relatable. They are not superheroes, to be clear, and that fits the small-town setting of Barrington, Colorado.

It's a town surrounded by forests and lakes and mountains, roughly in the middle of nowhere. It's also the home of people who were born and raised there, and never left home, which is where the story proper begins as a young adult male, who lives with his grandmother, makes plans to enjoy the weekend's activities associated with the town's annual Halloween festival.

As it happens, two of his high-school classmates are visiting the town; one due to family obligations, the other (Natalie) traveling with her boyfriend, whose band is booked for a gig. The town is strangely quiet and desolated, which is not enough to raise alarm bells, yet sufficient to make the resident and the visitors wonder what is happening. That leads to the titular attack, which starts slowly but quickly gains momentum and force, as blood flows, body parts separate and mutate, and a strange green liquid begins flowing from the bodies.

The animation reflects its creation as, essentially, a one-man show by director Eric Power. This is a low-budget labor of labor, though, fleshed out by family and friends. The script for example, is written by Andreas Petersen; the sense of humor is low-key and the malevolent forces that arise are unexpected, which is refreshing in a low-budget affair.

As Natalie, the never-say-die lead, Katie Maguire provides the best voice performance, tying the script together and helping to make the lead characters very sympathetic in their earnest, unselfish desire to survive -- but also to help their friends survive too.

When the film debuted last fall, I wondered how it would play by itself, but now that it's on Shudder, I can see it's a perfect fit for the service. Personally, my craving for explicit blood and violence, never that strong, has steadily diminished over the years, and I prefer alternatives that emphasize something different.

Shudder now has an abundance of films that emphasize something different. Their constantly changing lineup of titles are, yes, "horror" or "horror-related" or "horror-adjacent," while not being strictly what mainstream audiences may consider to be actual "horror" movies. I love that I can watch atmospheric foreign-language films that lean more on suspense and tension, and I also love that I can catch up on little movies that fall outside the boundaries.

Like Attack of the Demons, which strives (and succeeds) as a ton of bloody fun.

More about Attack of the Demons