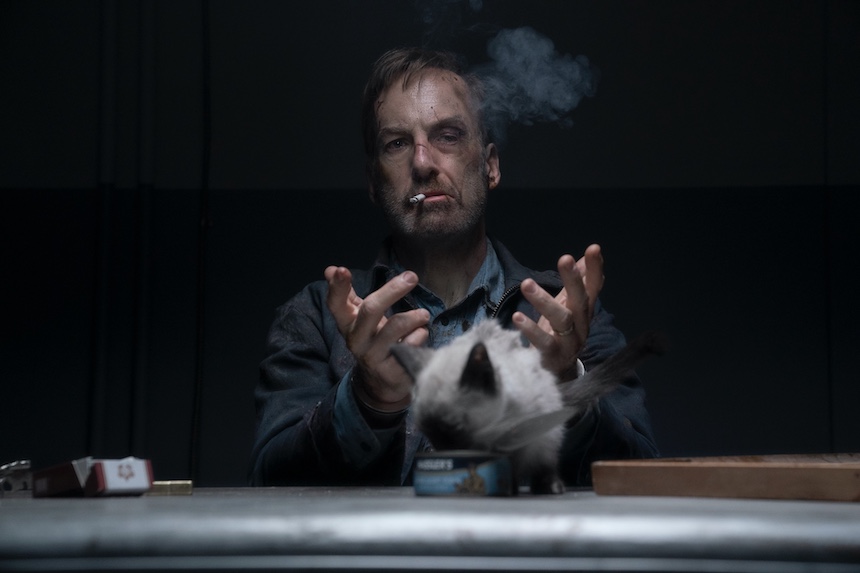 On a list of actors — currently living or presumed dead — making the jump from drama or comedy to the action genre, Bob Odenkirk, the star of Better Call Saul and Breaking Bad, would be somewhere near the bottom, if he was on the list at all.

Apparently, though, Odenkirk spent the better part of two years preparing for the title role in the middling, ultraviolent action-thriller Nobody, directed by the Russian-born Ilya Naishuller (Hardcore Henry) from a screenplay written by Derek Kolstad (the ongoing John Wick series). More of a cerebral actor than a physical one, Odenkirk gamely, if not always convincingly, delivers an attention-grabbing performance as Hutch Mansell, a nondescript, middle-class earner with a house, two kids, and a marriage slowly teetering towards dissolution, who, due to circumstances not under his control, becomes a John Wick-inspired inexhaustible brawler and merciless killer.

When we first meet Hutch, he’s everything he appears to be: A man driven by the rhythms and routines of everyday life, from waking up at the same, predetermined time, to jogging before breakfast, to taking public transportation to an accounting job at a small manufacturing company owned by his overbearing father-in-law, Eddie Williams (Michael Ironside). Only a regular call over a non-sanctioned radio frequency with his younger, unseen brother, Harry (RZA, a welcome, if inexplicable presence), suggests there’s more to Hutch than meets the eye. To his wife, Becca (Connie Nielsen, sadly wasted in a minor, throwaway role), and two children, Blake (Gage Munroe), a typically surly, withdrawm teen, and Abby Mansell (Paisley Cadorath), a introspective, non-judgmental preteen, Hutch represents a stable, if boringly bland, presence in their materially and emotionally stable lives, providing food, lodging, and the occasional encouraging word as needed.

After a home invasion by inept thieves leaves the family physically safe, but Becca and Gage questioning Hutch’s masculinity for failing to defend their family when the opportunity arose, Hutch finds himself at a well-trod, familiar crossroads. Finding and recovering family valuables, however, isn’t what sets Hutch off on the expected path of revenge and retribution: It’s a seemingly random encounter with a group of Russian-themed thugs on a bus that sets the remainder of Nobody’s linear, tension- and suspense-free Hutch vs. the faceless Russian mob plot into motion. It’s nothing we haven’t seen before. It’s something, of course, we’ll see again and again action-thriller-wise until audiences say “No more!” and demand either a refund, more originality from the genre, or better yet, both.

Staged, at least initially, with an emphasis on Hutch’s chaotic, clumsy improvisational skills, the bus scene functions as a pivot point both for Hutch and the discovery of Hutch’s unexpected skill-set, a skill-set that doesn’t so much evolve (because Hutch always possessed them, for reasons that won’t be spoiled here) as revealed through loosely connected circumstances, including hordes of disposable, black-clad henchmen, descend on Hutch and his family. Odenkirk generally holds his own during the second, more conventional action scene, though it’s still next-to-impossible to separate Odenkirk from his previous dramatic or comedic roles, presumably adding an unintentional level of absurdity to the scene.

Nobody intriguingly starts as a 21st-century version of Sam Peckinpah's Straw Dogs, as an exploration of modern or contemporary masculinity faced with the threat of physical violence, before segueing, each time more derivatively, into A History of Violence-style examination of a middle-class family man rediscovering his long-buried, inner psychopath, before finally devolving into a haphazardly, lazily executed Home Alone-meets-John-Wick-style finale.

Unfortunately, that extended, bullet-filled finale fails to deliver anything except the barest of thrills to action-hungry audiences, but with a sub-90-minute running time, at least Nobody doesn’t overstay its welcome.

Nobody will be released theatrically on March 26th, 2021, by Universal Pictures.