Miami 2021 Review: HOTEL COPPELIA, At the Edge of Revolution 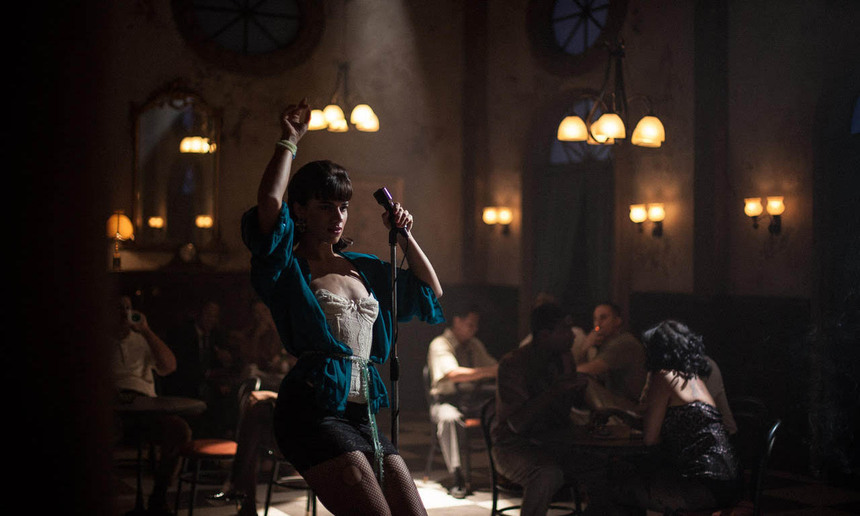 The roads of revolution and the fight for democracy is drenched in blood. And often it's the blood of those who end up forgotten. While those on the front lines are necessary, often acts of heroism, whether intentional or not, come from those far (sometimes metaphorically) from those front lines, those who are simply trying to keep themselves and their loved ones alive, those whose names are long lost and forgotten.

Award-winning filmmaker José María Cabral (Carpinteros, El proyeccionista) returns to tales of his native Dominican Republic, this time to the revolution of the 1960s, and the fight against American Imperialism. But rather than focus directly on the rebels, he instead turns his attention to those forgotten by history, mainly women.

The hotel, set beside the sea, might once have been the hotspot of nightlife in Santo Domingo. Now, Judith (Lumi Lizardo) runs the eponymous Hotel, which serves as a seaside bar, cabaret, and brothel. Like the captain of a ship, she has strict rules, and expects her 'girls' to follow them with precision. That it, until the revolution of 1965 begins. Most of the girls leave, the customers disappear, the revolutionaries take over the bar, and even then, the troubles have only just begun, with American forces following close to stop the 'evil communists'. Judith refuses to be forced out with her remaining girls, and will do whatever it takes to keep control of her property.

The film opens with the girls performing an abortion on Marie; a difficult but necessary action, showcasing how these women must rely on each other even when times seem to be good. Judith is not cruel, but she is strict and cold, acting as a manager more than a mother to her troupe (this includes fines for swearing and keeping the girls' tips). She has an answer for every question, a plan for every hiccup - except when the rebels arrive. Having lost all but three of her girls, she has to think fast. She makes an arrangement that will keep her, Beti, Marie, and Gloria inside the hotel, and presumably safe.

Is this helping the revolution? Directly, yes, but Judith is not interested in the political situation of her country; she wants these men out of her home and her customers back. Gloria becomes intimate, one of the many women rebels, and wonders about picking up a gun herself; Beti, a transwoman, thinks democracy could mean finally going to the USA for gender reassignment surgery. Judith tries to quash their dreams, telling them they should be thankful for her protection, and that's when things take a turn for the worse. The rebels are pushed back, the Americans invade, and Judith and the women find themselves at their mercy, reduced to little else but cooking, cleaning, and other 'free' services in exchange for their lives.

Cabral keeps us within the limited space that Judith and her girls occupy: the hotel, and the street and beach in front. We never see other parts of the city, and only meet those who come to the hotel. This keeps us in the women's place and understanding; what would we do in their position? Would we join the fight, offer support from the proverbial rear lines, go along with whomever was in charge, or do whatever we had to survivem, regardless of who it helped or harmed? The remaining women fall into the latter, mainly through circumstance; while Beti, Marie, and Gloria at least try to help the rebels by spying on the Americans, Judith does so, it would seem, to get them out of her home and get her business back.

While Cabral paints a detailed story of what these women endured, Judith's coldness keep a lot of the emotional engagement at bay. We get angry when we see Tina, the great rebel, being tortured, and sad when Beti makes a terrible decision of betrayal, but Judith is the face of this place, and she constantly berates and belittles the girls, and her actions (even her final one) seem to come for selfishness, even if good people are helped. The scenes with the girls are far more intimate and powerful, the kinds of conversations most of us would likely have if we were stuck betweem this proverbial rock and hard place: wanting to fight, scared to fight, at the mercy of those with the guns and the power.

Hotel Coppelia gives a different yet necessary perspective of those that represent who most of us might be in such a situation: those trapped by place and circumstance, torn between fear and bravery, and the few who might still remain understandably selfish in order to protect what they've worked for. While it feels a bit too predictable in the beats it hits for a story of revolution, its has the necessary focus on the lives of those too often forgotten.

Do you feel this content is inappropriate or infringes upon your rights? Click here to report it, or see our DMCA policy.
Cyndie LundyHotel CoppeliaJazz VilaJosé María CabralLumy LizardoNashla BogaertNick Searcy