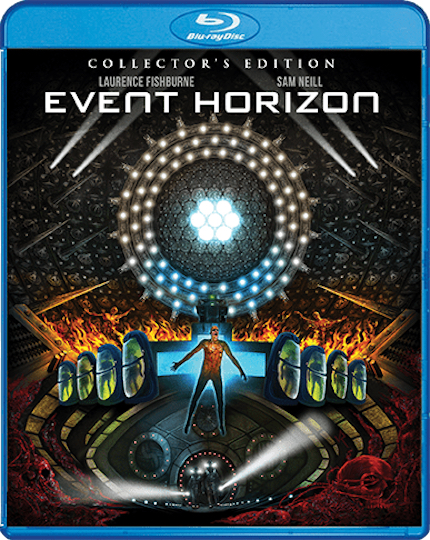 "Where we're going, we won't need eyes to see."

Uttered in devious delight, this iconic line from Sam Neill's futuristic mad scientist Dr. Weir, has stuck in my head since Event Horizon's original 1997 theatrical release. Originally, the film had to compete with James Cameron's Titanic in that year's summer release schedule, but the waterlogged blockbuster was pushed to December.

Both films were from Paramount Pictures, and in interviews, Paul W.S. Anderson (then credited as Paul Anderson) surmises that the executives were too busy with Titanic to bother watching Event Horizon dailies... which is likely the main reason that this cult classic got away with as much craziness as it did.

If you somehow don't know to what I'm referring to, find an Event Horizon fan and ask them what they think of the movie. They'll tell you all about the crazy imagery and "lost footage," which contained far more of the Hieronymus Bosch-influenced, blood-soaked, X-rated carnage that was cut and stored in an environment that caused it to deteriorate. This footage, that the crew took two weeks to shoot, is (or was) supposedly only available on VHS tape, and has been deemed unwatchable, due to its physical condition.

Unfortunately, Event Horizon did poorly at the box office due to questionable marketing and a public unsure what to make of the film, but wowed lots of fans since --- which is why we're still talking about the film close to 30 years later. Theoretically, Adam Wingard (Pop Skull, You're Next, Godzilla vs Kong) is onboard to direct and executive produce an Amazon series based on the cult classic, though it's been about a year and a half (as of this post) since anything was officially announced.

For new acolytes, Event Horizon is the story of a rescue crew lead by Captain Miller (the always awesome and formidable Laurence Fishburne) joined by Dr. William "Billy" Weir (the excellent Sam Neill). The ship Weir had built, the titular Event Horizon, went missing for seven years and has returned near Neptune's orbit, where it was last tracked. No crew aboard the vessel have responded to communications, and so a new crew and ship, the Lewis and Clark, was sent to investigate.

Of course, things go horribly wrong. Dr. Weir loses his mind, and the other crew members all see visions that plague them in one awful way or another, until the point of no return comes to call in a very violent way. The film is scary, freakish, existentialist (imagine floating in a space suit, untethered and alone, far from your ship among the stars) and sometimes funny as ... Hell. I've always described this film as "Hellraiser in space," but "The Shining in space" is how the writer pitched it to the studio, which is also quite appropriate, particularly in one scene.

Never one to shy away from a challenge, Scream Factory went on a quest to find any copies of the lost "Hell space footage" for their 4K Blu-ray release (out in North America now), only to come up empty.

That said, the film looks great on this release. The image is only slightly grainy and soft at times, notably when the dated CGI is at play, or subtly around the edges of the anamorphic framing. Often, the film looks quite excellent when only in-camera work can be seen, but this release is a step up from the previous 2008 Blu-ray from Paramount. Sound is fantastic (watch out for those loud jump scares).

The blacks and shadows are richer, realy making the insane production design and brighter hues (when applicable) pop off the screen. Gorgeous!