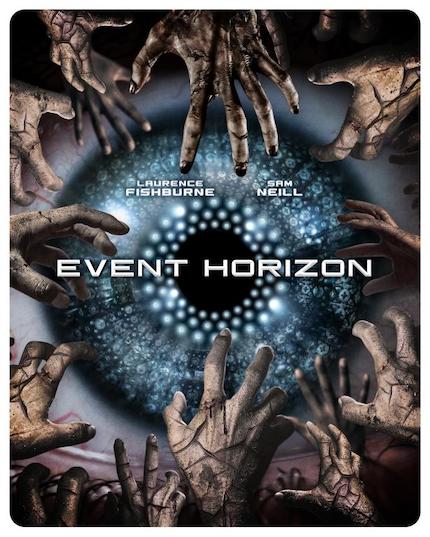 It’s hard to believe it’s been 25 years since Event Horizon was unleashed in theaters. To commemorate this milestone, Paramount Home Entertainment is releasing this sci-fi horror suckerpunch next week (August 9th) in North America.

Those hands, of course, were wielded by Sam Neill under laborious prosthetics (he had to sit though somewhere around eight hours in the make-up chair). Event Horizon was directed by Paul Anderson (Alien vs. Predator, Resident Evil) who later added the “W.S.” to his name after being confused with Paul Thomas Anderson too many times.

As the plot goes, a rescue crew headed by Captain Miller (Laurence Fishburne) responds to a distress call in deep space. The source of the call is revealed to be an infamous missing ship, the Event Horizon, which was built by Dr. Weir to fold space-time.

But as it turns out, violating the known laws of physics isn’t the only thing the ship can do. Not long after the crew board, they find ultra-disturbing recordings and the remnants of its crew, such as a floating corpsicle, copious gore, and predatory ghosts.

You can imagine that the Event Horizon soon becomes an all-out horror show. What makes it different from other sci-fi horrors is the caliber of acting, cinematography, cool script, and jaw-dropping production design, still one of my favorites. The sets were inspired by classic Gothic architecture, and it has quite an effect in steel, rather than stone. Michael Kamen’s score also elevates the movie.

Unfortunately, there are no new special features, as they’re all ported over from a previous release. However, those who are new to the film and purchase this release will have a ball with the featurettes, because they’re all chock full of fun and knowledge. You can find my review of the last 4K release here via Scream Factory, which offers different special features.

I was one of the original weirdos who saw Event Horizon during its initial theater run and I can tell you that in my screening, there were sadly only a handful of people there. The marketing at the time was an issue. From what I recall then, it was marketed as more of a sci-fi thriller than horror, and because the right audience wasn’t tapped, the film didn’t do well.

Since 1997, I’ve probably seen the film a dozen times and this release from Paramount is gorgeous. It’s so beautiful, that if not for the CGI (and that even somehow looks better than in previous versions), one would not be blamed for thinking this was a new film. The 4K restoration is stunning, and I’m glad to see that this improperly maligned film has gotten the love it deserves. Sound is also uniformly excellent.

It’s helpful to the film’s legacy that Event Horizon has found tons of fans over the years, most notably with Taika Watiti; the film was given a brief mention by Natalie Portman’s Jane Foster in the new Thor: Love and Thunder.

If you’re a fan like I am, I recommend adding this beautiful new 4K/Blu-ray combo steelbook to your home video library. Thanks, Paramount!

Do you feel this content is inappropriate or infringes upon your rights? Click here to report it, or see our DMCA policy.
Paul W.S. AndersonPhilip EisnerLaurence FishburneSam NeillKathleen QuinlanHorrorSci-FiThriller