Dario Argento's stunning debut, The Bird with the Crystal Plumage, flies onto 4K UHD for the first time through Arrow Video, and that's only the beginning! Also coming this summer is an incredible box set of Italian crime films called Years of Lead featuring Like Rabid Dogs, Savage Three, No, The Case is Happily Resolved, Colt 38: Special Squad, and Highway Racer. Add to those a limited edition Blu-ray set of Sam Peckinpah's Major Dundee, and Masumura Yasuzo's Irezumi, and The Stylist, director Jill Gevargizian's gorgeous debut, it's going to be an expensive month for collectors.

Thankfully, the entirety of the June slate is going to be available in the US, Canada, and UK, so no importing necessary in those territories! Check out the details in the gallery below. 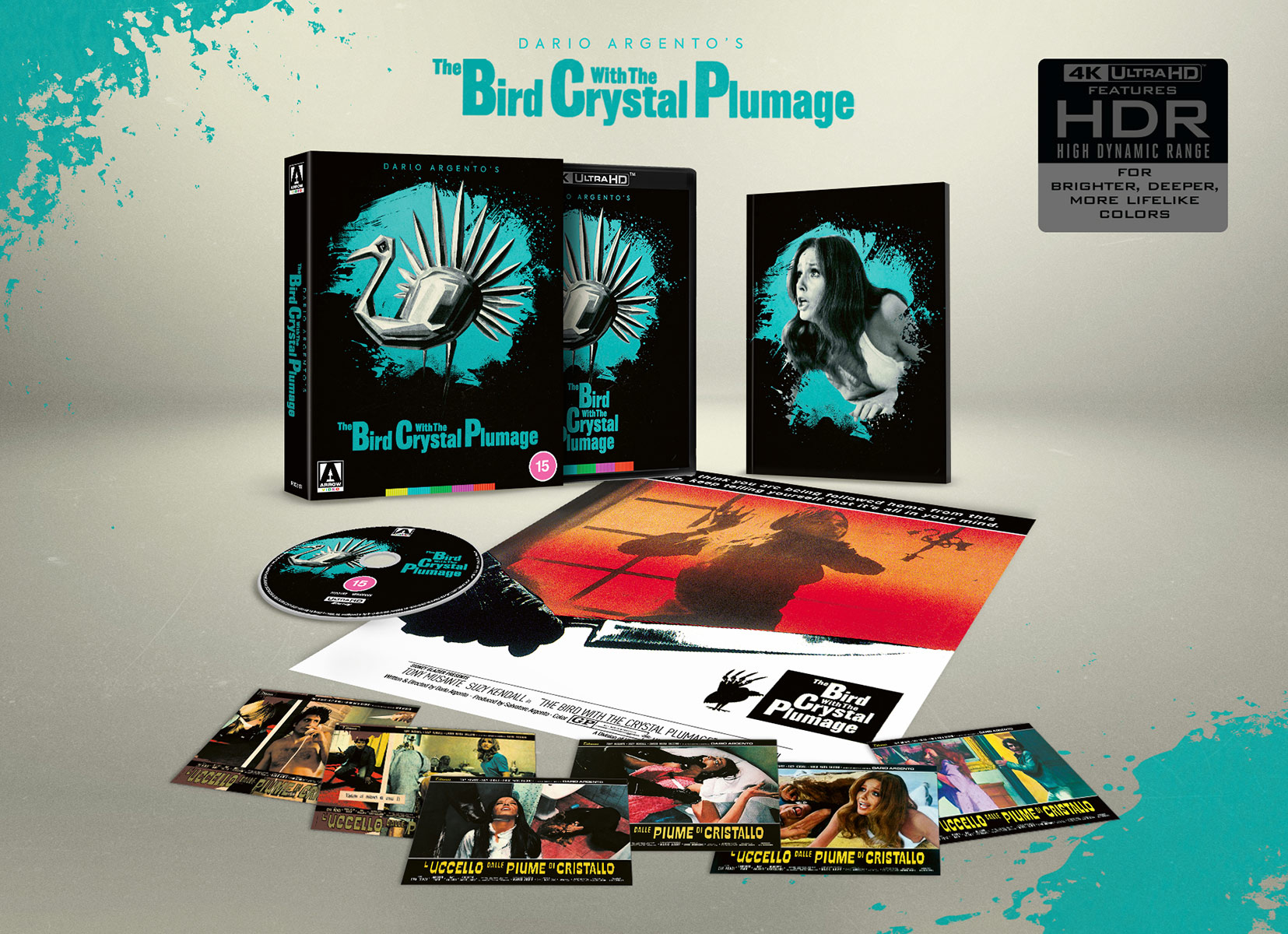 In 1970, young first-time director Dario Argento (Deep Red, Suspiria) made his indelible mark on Italian cinema with The Bird with the Crystal Plumage – a film which redefined the ‘giallo’ genre of murder-mystery thrillers and catapulted him to international stardom.

Sam Dalmas (Tony Musante, We Own the Night), an American writer living in Rome, inadvertently witnesses a brutal attack on a woman (Eva Renzi, Funeral in Berlin) in a modern art gallery. Powerless to help, he grows increasingly obsessed with the incident. Convinced that something he saw that night holds the key to identifying the maniac terrorizing Rome, he launches his own investigation parallel to that of the police, heedless of the danger to both himself and his girlfriend Giulia (Suzy Kendall, Spasmo)…

A staggeringly assured debut, The Bird with the Crystal Plumage establishes the key traits that would define Argento’s filmography, including lavish visuals and a flare for wildly inventive, brutal scenes of violence. With sumptuous cinematography by Vittorio Storaro (Apocalypse Now) and a seductive score by legendary composer Ennio Morricone (Once Upon a Time in the West), this landmark film has never looked or sounded better in this brand new 4K Ultra HD presentation from Arrow Video!

The 1970s were a time of intense uncertainty and instability in Italy. Political corruption and widespread acts of left and right-wing terrorism, alongside a breakdown in social cohesion and a loss of trust in public institutions such as the government and police, created a febrile atmosphere of cynicism, paranoia and unexploded rage. Throughout this period, these sentiments found expression in a series of brutal, often morally ambiguous crime thrillers which tapped into the atmosphere of violence and instability that defined the so-called Years of Lead.

This box set gathers five films from the heyday of the “poliziotteschi” – the umbrella term used to describe this diverse body of films. In Vittorio Salerno’s Savage Three (1975) and Mario Imperoli’s Like Rabid Dogs (1976), random acts of violence committed by vicious young sociopaths threaten the fragile fabric of respectable society. In Massimo Dallamano’s Colt 38 Special Squad (1976) and Stelvio Massi’s Highway Racer (1977), renegade cops battling against red tape and political corruption turn to new and morally dubious methods to dispense justice. Finally, class dynamics are explored in Salerno’s No, the Case is Happily Resolved (1973) as an innocent man finds himself under suspicion for a savage crime committed by a highly respected member of society.

Decried by critics for their supposedly fascistic overtones, the poliziotteschi were in fact more ideologically varied and often considerably more nuanced than such superficial readings would suggest, and proved a huge hit with theatergoers, who responded to their articulation of present-day social concerns. Featuring an impressive line-up of Euro-cult stars, including Joe Dallesandro (The Climber), Ivan Rassimov (Your Vice Is a Locked Room and Only I Have the Key), Maurizio Merli (Violent City) and Enrico Maria Salerno (The Bird with the Crystal Plumage), this collection of stylish, hard-hitting Euro-crime thrillers showcases the range and breadth of the genre and is a must-have for newcomers and grizzled veterans alike. 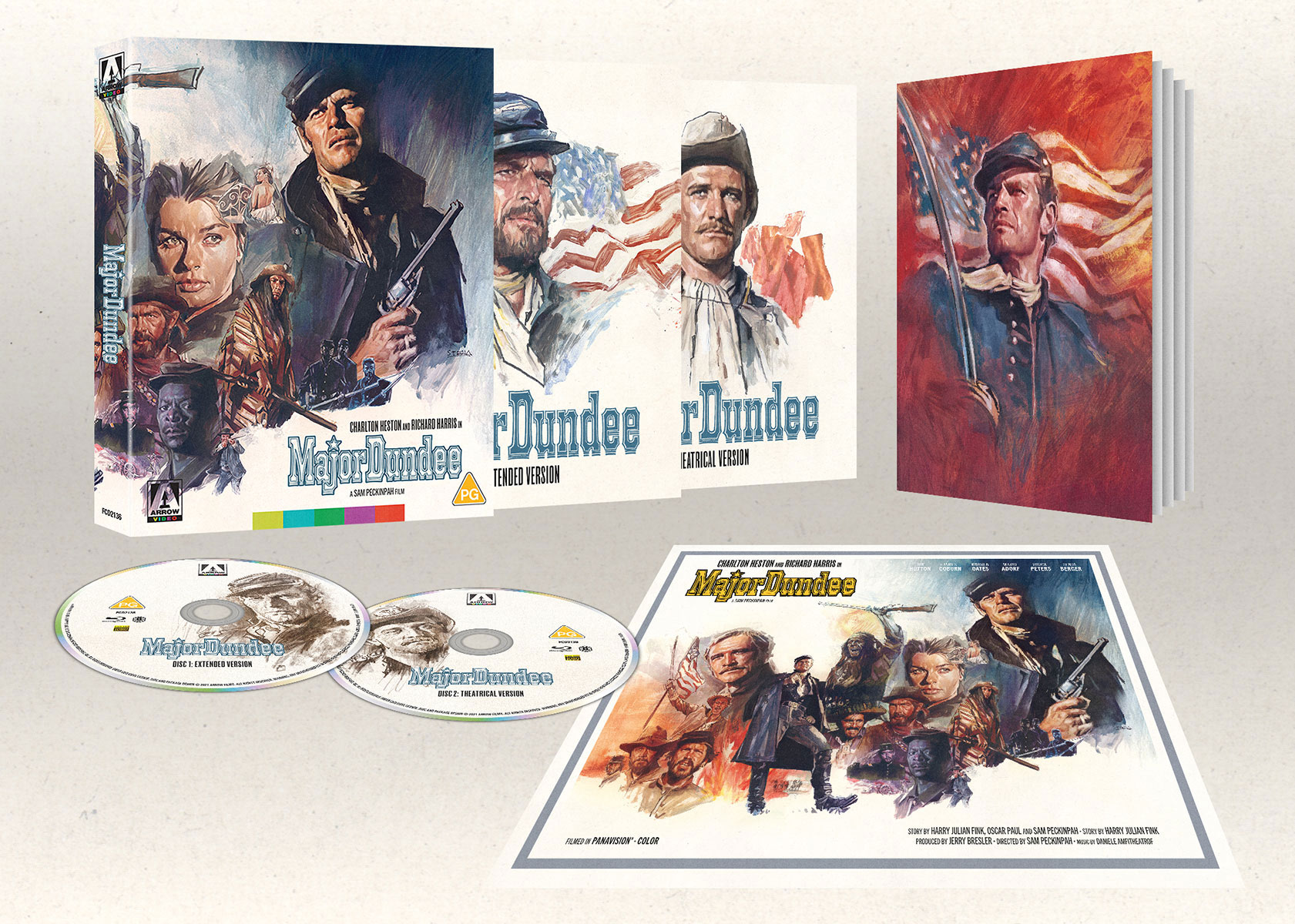 THE SCREEN STRETCHES TO NEW HORIZONS TO TELL THE EPIC STORY OF THE SOUTHWEST!

After making his first bonafide classic in Ride the High Country, director Sam Peckinpah took a step towards the epic with Major Dundee. The film would, in many ways, define the rest of his career both on screen and off, as the drama behind the camera matched the action in front of it.

Charlton Heston stars as Major Amos Dundee, a vainglorious Union Cavalry officer, who mounts an expedition to hunt down Apache war chief Sierra Charriba. Building his own army of criminals, ex-slaves and Confederate POWs - among them one Captain Ben Tyreen (Richard Harris), whose intense former friendship with Dundee is tainted with a sense of betrayal on both sides - Dundee heads into Mexico, his eye fixed firmly on a last shot at greatness.

Legendarily acerbic, Major Dundee would be the first time that Peckinpah had a movie taken away from him. While a director’s cut may be lost to us, this Limited Edition shows us the thrilling, morally complex epic that Peckinpah was aiming for. Beautifully shot and with a stellar supporting cast including James Coburn, Warren Oates, and L.Q. Jones, it remains a stunning achievement and an essential experience for anyone interested in the life and cinema of “Bloody Sam.” 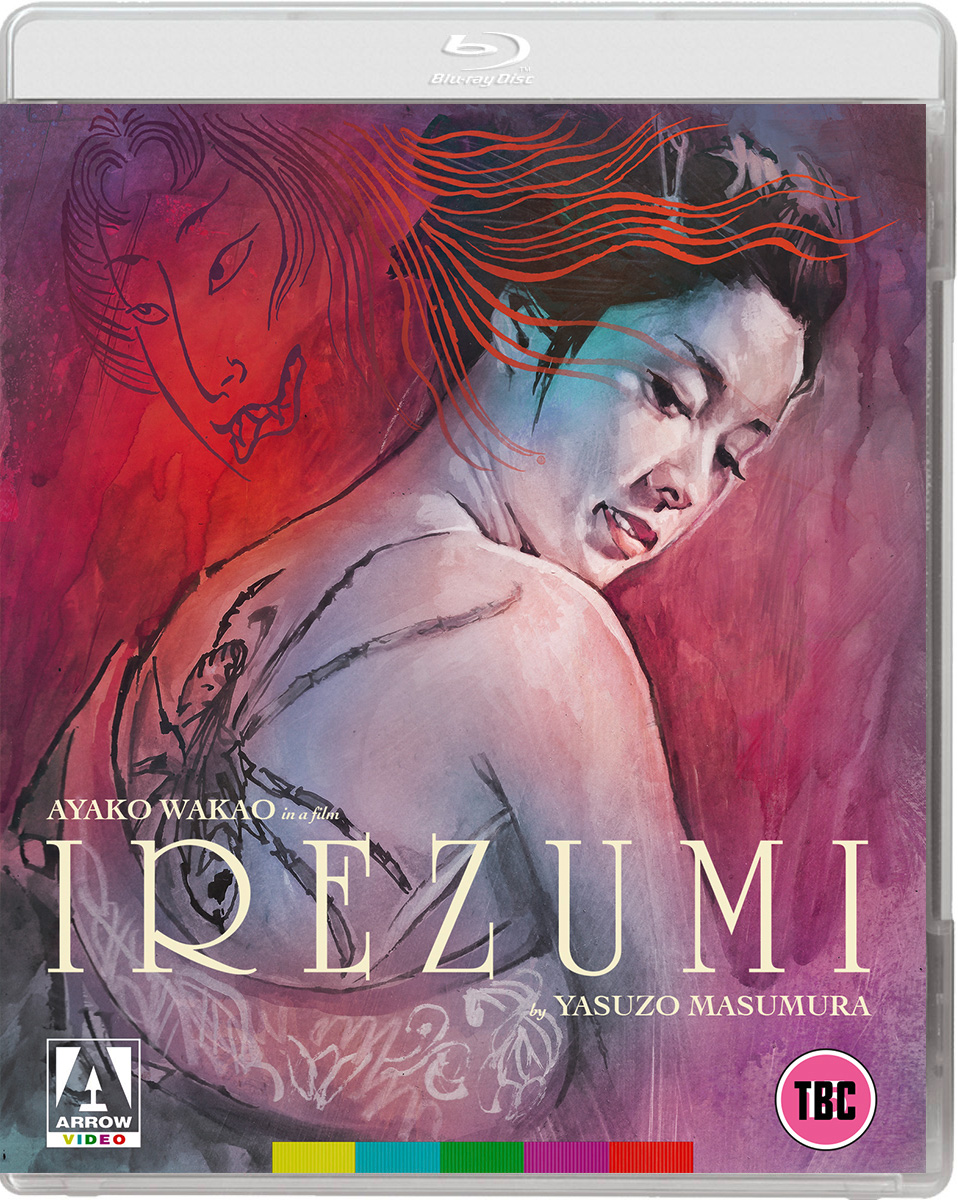 Drawn from the pen of one of Japan’s foremost writers of the 20th century, Junichiro Tanizaki (A Fool’s Love, The Makioka Sisters), Irezumi is a stylish tale of lust, betrayal and revenge directed by Yasuzo Masumura (Giants and Toys, Blind Beast).

Masumura’s muse Ayako Wakao (The Blue Sky Maiden, Red Angel) stars as Otsuya, the daughter of a rich merchant, who is tempted by her lover, Shinsuke, a lowly employee of her father’s, to elope. During their flight, Otsuya’s beauty attracts the gaze of Seikichi, a mysterious master tattooist who sees her pristine white skin as the perfect canvas for his art. The image of the large demonic spider that he emblazons across Otsuya’s back marks her as the property of another man, radically altering her relationships with all around her as her personality transforms under its influence.

Available for the first time outside of Japan in a new 4K restoration, Irezumi sports some of Japanese cinema’s most respected talent of its day both in front of and behind the camera. The bewitching cinematography by Kazuo Miyagawa (Rashomon, Ugetsu) captures the sensual atmosphere of the period setting, while the script by Kaneto Shindo (Onibaba, Kuroneko) lends a modern twist to this feverish meditation on obsession and the act of creation. 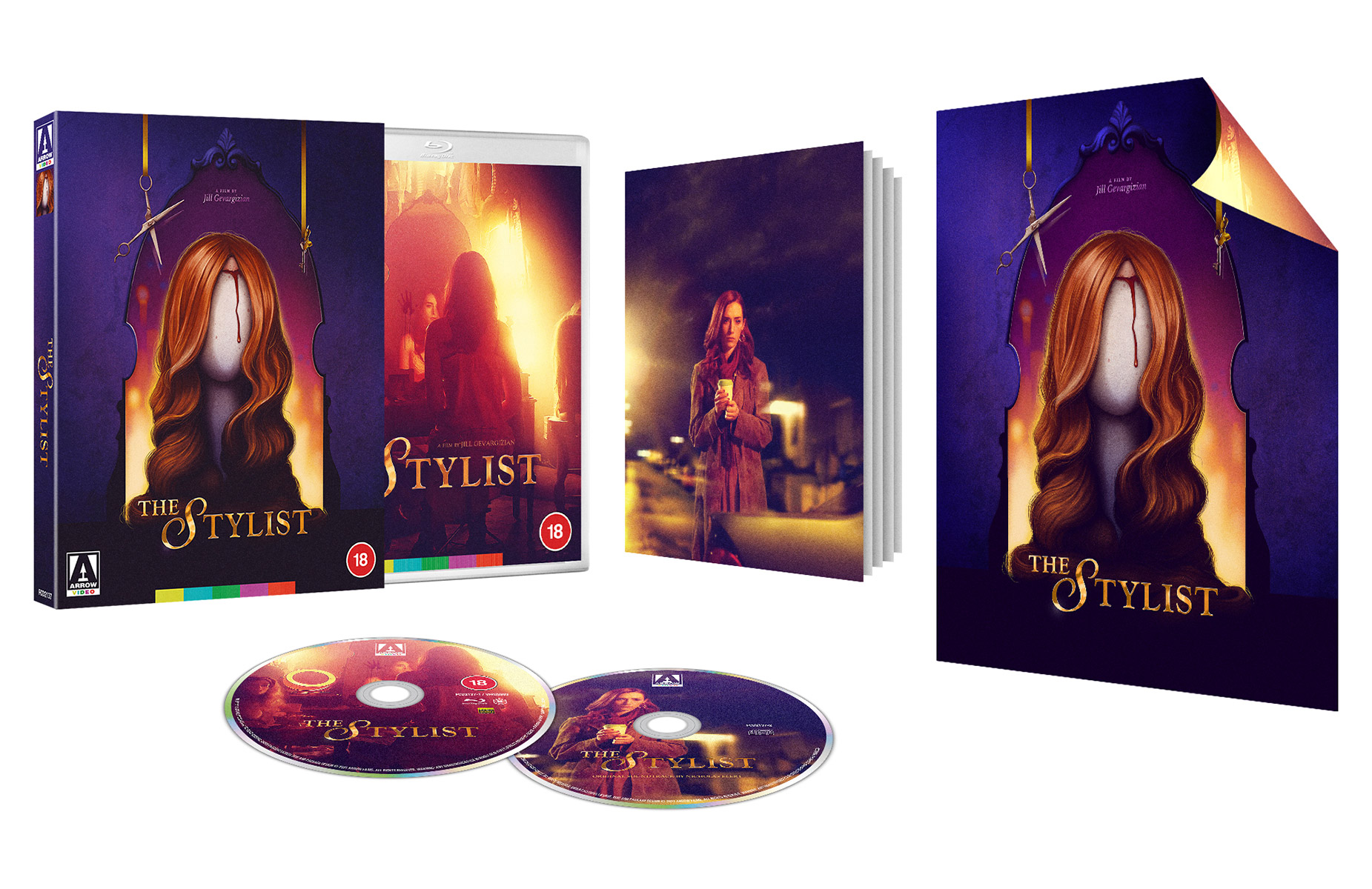 Obsession gets a makeover in The Stylist, a deliciously twisted slice of female-led psychological horror, nominated for the New Visions Award for Best Motion Picture at the 2020 Sitges International Film Festival and based on co-writer/director Jill Gevargizian’s award-winning short film of the same name.

We all dream of being someone else… but for Claire (Najarra Townsend, Contracted), that dream goes from an obsession to a living nightmare. Hairstylist by day, serial killer and collector of scalps by night, Claire’s lonely existence is thrown into turmoil when her regular client, Olivia (Brea Grant, After Midnight, Lucky), asks her to style her hair for her wedding day. Increasingly fixated on Olivia’s seemingly flawless life, Claire vows to lock up her scalp collection and change her ways for good – only to discover that repressing your deadly desires is easier said than done…

Featuring striking visuals and pitch-perfect performances from its talented cast, The Stylist offers viewers “a delicately deranged glimpse into social anxiety and loneliness” (Slashfilm) – a bold and mesmerizing debut feature from a filmmaker to watch.

DISC ONE (BLU-RAY) – THE STYLIST