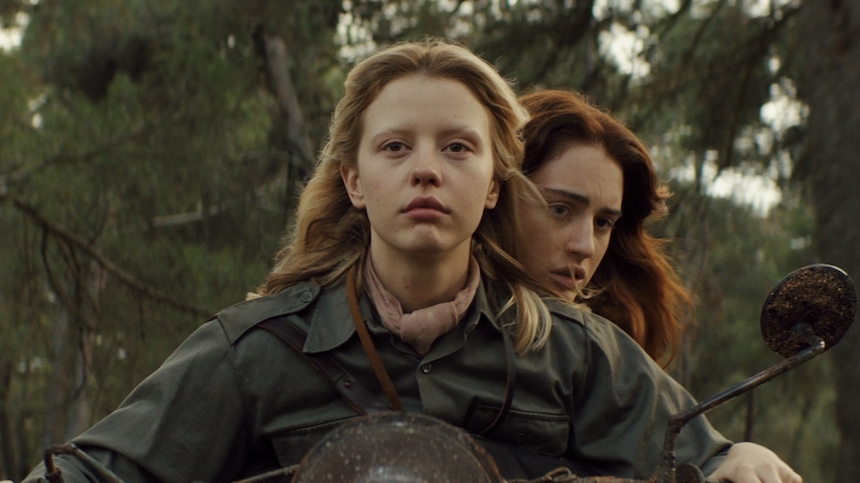 In writer-director Karen Cinorre’s visually enthralling, stunning debut, Mayday, it’s a semi-Hobbesian “war of all against all,” except the first “all” and the second “all” fall strictly along gender lines, pitting semi-suspecting men, some all-too-eager to play the heroes in their own mind, against a tight-knit group of young women, ferociously skilled fighters one and all, just as eager to prove they don’t need or want men to save them. That most of Mayday is set not in our socially, politically, and culturally stratified world, but in an oneiric, upside-down Oz crossed with Lord of the Flies where a never-ending war resembling World War II rages in and around a sun-drenched coastline (Palu, Croatia, doing its bit for post-pandemic tourism). Spoiler: The men don’t stand a chance.

When we first meet Cinorre’s protagonist, Ana (Grace Van Patten), she’s having a very bad, no-good, terrible day, eking out the equivalent of subsistence living as a harried, harassed, and abused server in a no-name restaurant in the seeming middle of nowhere. News of an impending storm of indeterminate strength and size portends trouble if not outright doom. The news of the storm arrives via an old-school radio along with an alluring female voice intoning “Mary alpha Yankee delta alpha Yankee” (“mayday”) deliberately connects Ana’s physical and emotional journey to a certain wide-eyed, Kansas-born Dorothy, but instead of being swept up, up, and away by a semi-sentient tornado to a Technicolor world, Ana makes the conscious, proactive decision to exit our undeserving world in the most shocking, likely final way possible: By crawling into a human-sized oven that sends her not to her immediate death, but plunging into a vast ocean (cue rebirth imagery).

After Ana finds herself on an unknown, foreign beach, half-aware of her surroundings or how she arrived at a new, unnamed country or land, she finds Marsha (Mia Goth), the fearless, fearsome leader of a band of woman-warriors who’ve dedicated themselves to eradicating any men, young, old, and anywhere in between, who fall from the sky or stumble too close to their makeshift home inside a disused, abandoned WWI submarine. In the first — but by no means last — Wizard of Oz-like echo to Ana’s previous, unwanted life, Ana left Marsha’s doppelgänger, a desperately unhappy bride, behind in that other, dimly remembered world. This Marsha, however, has turned herself into President-For-Life of the She-Ra Men Hating Club, and expects everyone, including the two other young women nominally under her charge, Bea (Havana Rose Liu) and Gert (Soko), to follow her every order and impulse, up to and including using the submarine’s radio set to lure men to their doom siren-style.

Cinorre anchors Ana’s journey in her gradual awakening, first to her own power — literally, as she becomes the company’s expert marksman with little effort — then to her own independence, free of the toxic masculinity that defined and undermined her other life, but also apart from Marsha’s dictatorial inclinations. Marsha’s extremist philosophy — kill them all and let the goddess up above or down below sort them out — slowly begins to turn Ana against her, forcing her to make a decision that threatens to fracture her newfound family. Along the way, she encounters other real-world analogs, including her sometime boyfriend and fellow server, Dimitri (Théodore Pellerin), a kindly cook, Max (Zlatko Buric), and a fellow restaurant worker, June (Juliette Lewis), who plays a key, if too-brief, role as the other world’s jaded, been-there-seen-everything mechanic and potential ally.

Overflowing with arresting imagery courtesy of Cinorre’s prodigious imagination and cinematographer/husband Sam Levy (not to mention the natural beauty of Croatia’s coastline and its nearby forest environs), Mayday’s stinging emotive power ultimately lies less in a loosely structured narrative that all-too-often turns on sketchily written, under-motivated characters or a fantastical world with hazily drawn, ever-shifting, dreamlike rules, than on Mayday doubling as gender-based allegory or metaphor, on turning emotional, structural, and institutional repression of the gender-patriarchal side into a literal world where survival against male predation and sexual violence depends on a reciprocal willingness to respond in a similar manner (minus the predation).

Do you feel this content is inappropriate or infringes upon your rights? Click here to report it, or see our DMCA policy.
Karen CinorreFrancesco Piacentini-SmithGrace Van PattenThéodore PellerinZlatko BuricDrama