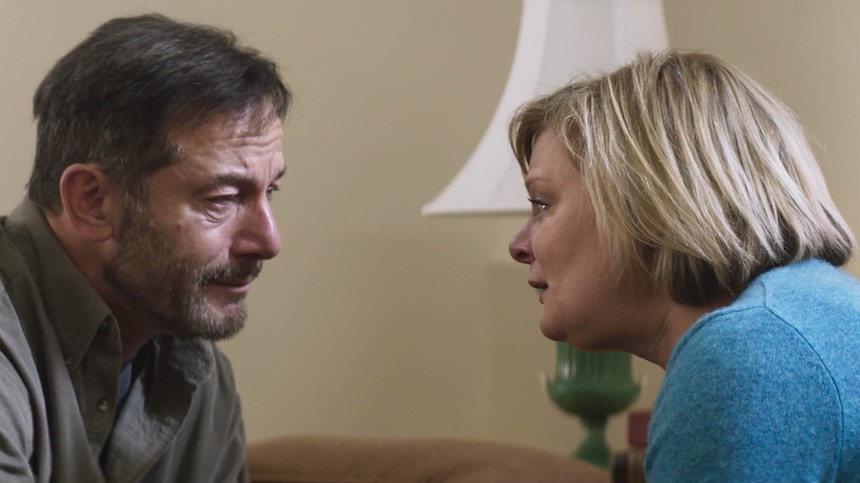 It might be one of the deepest and most abiding ironies of the last year that it took the emergence of one pandemic (COVID-19) to temporarily end another pandemic (school shootings).

With the majority of elementary and high school students in the U.S. learning remotely since the spring of 2020, school shootings fell to almost zero. America’s gun culture, however, and the vast and easy proliferation of firearms (roughly 400M) means that a return to normal later this year or next will likely result in the sad, tragic, if preventable, return of school shootings, making actor-turned-writer-director Fran Kranz’s devastating, searing feature-length debut, Mass, as timely tomorrow as it was when Mass was shot early last year.

Essentially a four-character chamber piece, Mass centers on Gail (Martha Plimpton) and Jay (Jason Isaacs), a long-married couple still mourning the death of their teenaged son in a school shooting six years earlier, and Linda (Ann Dowd) and Richard (Reed Birney), the parents of the now-deceased school shooter. Arranged by Gail and Jay’s longtime therapist, Kendra (Michelle N. Carter), at a local Episcopalian church (an ironic setting given how little organized religion or the spiritual comforts it provides believers has a role here), the four-person sit-down has been years in the making, ostensibly to allow the two families to not just meet outside the inherent pressures of the public eye or a legal courtroom, but to start or restart the process of healing and possibly even reconciliation, a big ask given the events that led to the deaths of their sons on the opposite side of a school shooting.

Initially, Kranz focuses on the rituals in and outside the church, the nervous, anxious prepping of the room by church staff, Judy (Breeda Wool) and Anthony (Kagen Albright), self-consciously aware of the long-planned meeting happening in minutes, the awkward first contact between the two families, the exchange of niceties and banalities that hide the despair, anger, and confusion shared by both families, if for not dissimilar reasons. The question of blame — and whether and how much Linda and Richard — hangs over the first tentative minutes between the two couples. Linda’s conciliatory offer of flowers, clumsy, if well-intentioned, becomes freighted with the deep well of unspoken feelings and emotions between the two couples.

It doesn’t take long, however, before Gail’s barely contained or hidden rage, the kind of rage felt by parents who’ve lost their children in school shootings everywhere feel, emerges from a seemingly casual interaction, setting Gail against Richard’s defensiveness and Linda’s raw vulnerability with Jay, at least temporarily, in supportive partner role. It’s obvious Linda wants, if not absolution, then forgiveness, while Richard, eager to avoid blame and responsibility, attempts to engage Gail and Jay in a legalistic, formal matter, noting everything Richard and Linda, aware of their son’s psychological problems (isolation, clinical depression, suicidal ideation), tried, including therapy, to help him find himself in a non-destructive way, all while refusing to acknowledge their son’s potential for violence (a key turning point in Kranz’s watertight script).

While occasionally on the wrong side of well-wrought (dialogue), Kranz’s ear for naturalistic, realistic dialogue does wonders, both for his characters and for the incredibly persuasive performances he elicits from a talented, experienced cast. Kranz’s multi-layered dialogue reveals and delineates character, giving its quartet of characters specific, identifiable voices (an accomplishment that’s much more difficult than it sounds).

Almost as importantly, despite the limited location or setting, Mass rarely feels cramped or even stagey, a testament both to Kranz’s engrossing, propulsive script, taut, sensitive direction, and career- or near career-best performances by an award-worthy cast.

Do you feel this content is inappropriate or infringes upon your rights? Click here to report it, or see our DMCA policy.
Ann DowdJason IsaacsMartha PlimptonReed BirneySundance 2021