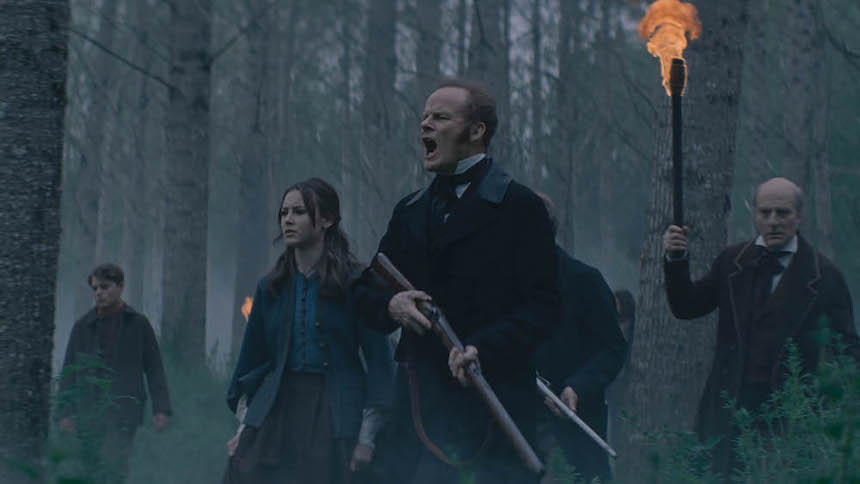 From A Werewolf of London to An American Werewolf in London, from The Wolfman (1941) to The Wolfman (2010), and The Curse of the Werewolf and Ginger Snaps in between, lycanthropy has held a peculiarly long-lasting fascination in the popular imagination going back almost a century.

Lycanthropy represented — and still represents — primitive, ravenous rage at its most chaotic and destructive, free of social, cultural, or personal constraints. Innovation or subversion, however, has often been in short supply in the sub-genre. All too often, filmmakers have been content to simply tweak over-familiar tropes and conventions, add bucketfuls of blood and gore (when they’re so inclined) to old-school practical effects, and expect audiences eager to escape into one of their favorite sub-genres for 90- or 120-minutes at a time.

Writer-director Sean Ellis (Anthropoid, Metro Manila), however, isn’t among the previously mentioned filmmakers. His latest film, Eight for Silver, is nothing if not ambitious. Set in the late 19th-century in a liminal space and country somewhere between England and France (the characters have French names, but they speak the Queen’s English), Eight for Silver centers on the ill-fated Laurent clan, Seamus (Alistair Petrie), an aristocratic landowner, Isabelle (Kelly Reilly), the wife he barely tolerates, and their two children, Charlotte (Amelia Crouch) and Edward (Max Mackintosh). In his ruthlessness and disregard for human life, Seamus symbolizes the cruel, rapacious capitalism of the late-Victorian era, but for Seamus and his family, it’s an era most of them won’t see to its end.

When Roma appear on land bordering Seamus’ and several other landowners, claiming ownership, the landowners dispatch them without a moment’s hesitation. Rather than getting up-close-and-personal, Ellis chooses to film the carnage, the flashpoint for everything that follows, from a relatively safe distance, coldly, clinically watching the landowners and their mercenaries cut down men, women, and children.

One of the last survivors, a nameless woman, curses Seamus and the other men, tying the death of the Roma to the land theft and genocide to colonialism. As a 19th-century man, Seamus, of course, doesn’t believe in curses, supernatural or otherwise, but he quickly becomes a convert when a wolf-like creature begins rampaging through the countryside, killing men, women, and children, regardless of social rank or status or their nearness to God.

In what seems like a positive development story-wise, Ellis introduces John McBride (Boyd Holbrook, Logan, Narcos), a traveling pathologist and hunter who’s apparently dedicated himself to following the curse as it moves from the countryside to towns, cities, and back again. Like all or most semi-mysterious hunters, McBride has a tragic backstory of his own (spoiler: It’s exactly what you think it is), but McBride’s personal story takes a backseat to a hunt that strikes directly at the Laurent clan, their servants, and the nearby town, usually to throat-ripping and chest-bursting effect.

Ellis generally relies on practical effects for the cursed, wolf-like creature that appears sporadically throughout Eight for Silver, though the occasional scene features CGI augmentation that was better left either fully practical or more thoroughly finished. Ellis instinctually understands that practical effects in horror are a must, adding a level of visceral verisimilitude still unmatched by anything computer-generated or added. More controversial, however, is Ellis’s decision to embrace a unique appearance for his creature, less werewolf than a (hairless) man on all-fours, with a shark-like snout rather than a wolf-like one.

If Eight For Silver falters, though, it’s in the overabundance of characters who tend to appear and disappear at irregular intervals to advance a specific plot point, the hints of stories or subplots (like McBridge’s potential relationship with Isabelle) that never find resolution, or the rush to follow-through on a new element of his iteration of lycanthropy to motivate a character’s rash, willfully blind behavior that ultimately leads to the deaths of dozens to the literal monster waiting outside the door. Ultimately, however, those are minor problems that do little to dilute Ellis’s essential contribution to a sub-genre desperately in need of reinvigoration.

Do you feel this content is inappropriate or infringes upon your rights? Click here to report it, or see our DMCA policy.
Sean EllisSundance Film Festivalwerewolf

More about Eight for Silver