Writers often have to think out the logistics of various scenarios or events that they want to happen in their stories, i.e. what does a character need to do to make X happen? And sometimes, this involves crime. And no doubt many of us, at one time or another, have thought about how we would go about committing a serious crime, and how we would avoid getting caught. Add a filmmaker in the mix, and there's a story ripe for the picking.

Filmmaker Gillian Wallace Horvat takes a decidedly dark comedic route on the road of meta-filmmaking in her feature debut, I Blame Society. A clever and more than a little disturbing satire that takes a harsh look at indie filmmaking, our selfie and self-centering culture, and the logistical difficulties that come with planning the perfect murder.

Gillian (Wallace Horvat) is a smart, talented, and experienced director, producer, and writer. And yet, she cannot get her projects off the ground. The kind of funding she needs is reserved either for men, or women who will conform to what the men in charge want. Admitedly, she can be a little too honest with some people (calling her best friend's girlfriend 'Stalin'), but what's a woman to do when no one will help her? Find a doable project: in this case, taking an odd complement, that she would make a great murdered, and turning it into a documentary. Except, Gillian decides to actual go through with the crime. Or to be more accurate, crimes.

Like many of us who have certain skills and are learning how to apply them to a new endeavor. She discusses the idea with her best friend abd significant other (neither of whom take her seriously). She does her homework; she tests out committing less 'serious crimes (shoplifting, trespassing), all the while with a GoPro strapped to her head, and a flair for the dramatically clumsy - or clumsily dramatic? Gillian has that awkward charm that is often exploited in large studio films via the 'manic pixie dream girl' trope - but Horvat turns this to great effect, walking an fine line between that clumsy charm and the person who can't help falling in love with her success as a murderess. 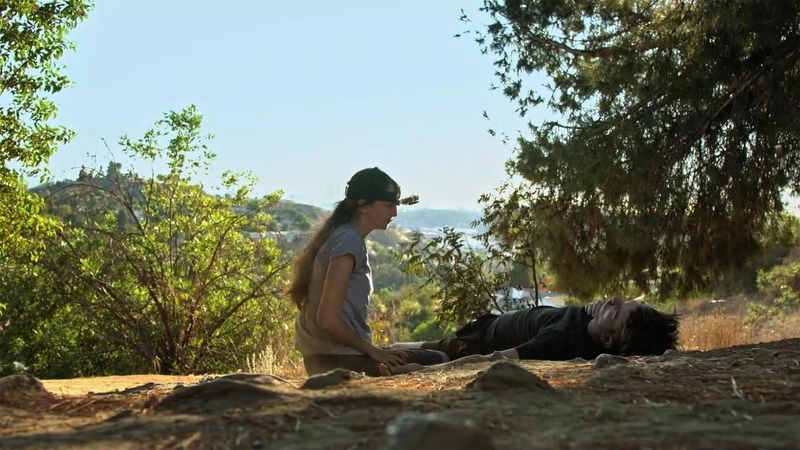 It doesn't begin this way - it's all about what she could do. Much like the artist who dreams about what they could accomplish is they were given the necessary time and resources, Gillian conceives through possibilities. But in this case, the project (murder) necessitates working alone - so, unlike her film career, she finds (after a few hiccups) she's good at it, and successful. Isn't that something we all want - to be good at what we chose to do in life? To see our hard work pay off? Even if that hard work means watching someone die?

What might normally be a detriment to the storytelling processes - the use of iphones, gopros, and any availabel portable camera that can get the angles and Gillian's insistance at their use in every scene she creates - not only highlight the irony and absurdity, but makes the voyeurism both comic and deeply uncomfortable. Gillian is just charming enough that we understand why she's able to get away with everything; but just annoying enough to be uncomfortably relatable and that we can't quite condone her behaviour (even if we want, especially with two particular characters).

While it does venture into some meta- and specific territory of the indie film world, there is enough to extrapolate for anyone who's ever been passionate about a particular career, and found their way blocked at every turn - nto for lack of their own talent, skill, or drive, but simply because of the gatekeepers who don't want to share space (and money, and prestige). Gillian might take a perverse enjoyment out of her new 'work', but the motivation stems from an understandable frustration.

The most enjoyable kind of dark comedy, one that embraces its DIY indie spirit, featuring a strong performance by its creator - in whose shoes we all have likely wanted to be, whether we want to admit it or not - I Blame Society takes a very tongue-in-cheek look at the indie film world, the struggle to express yourself, and the odd outlets we all find that will allow our skills to thrive.

More about I Blame Society