Review: ARCHENEMY Introduces A New Kind Of Cosmic Action Hero On The Streets Of LA 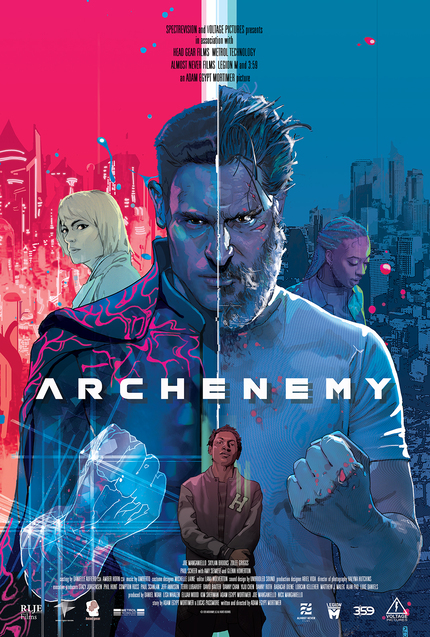 Director Adam Egypt Mortimer explores his obsession with the cosmos in his third feature, Archenemy, starring Joe Manganiello as a maybe/possibly superhero from outer space drunkenly stumbling through LA's skid row in search of his nemesis. A kind of mumblecore sci-fi/fantasy/action hybrid that keeps its audience guessing at the reliability of its protagonist's point of view while delivering solid action and a trip through Los Angeles' seedy drug trafficking underworld.

When a teenager named Hamster - played by Skylan Brooks (The Darkest Minds) - desperate to break into the internet journalism game runs into a beefy but grizzled drunk drifter calling himself Max Fist (Manganiello), he smells a viral hit. Fist doles out wild stories about his descent from the planet Chromia, his apocalyptic battle with a supervillain named Cleo, space whiskey, cosmic blood, crystal caves; all of which Hamster uses to get his foot in the door at a Buzzfeed-esque content farm. Much to everyone's surprise, Max Fist becomes an internet phenomenon, though Hamster chooses to play his cards close to the vest in order not to share the source of his success with potential competitors.

Hamster's sister, Indigo (Zolee Griggs, Wu Tang: An American Saga) on the other hand, has achieved success through less legitimate means as an up and coming dope dealer under the less-than-beneficent Manager, played by an effortlessly skeezy Glenn Howerton (A.P. Bio, It's Always Sunny in Philadephia) in the latest in a long line of apex scumbag roles at which he is an undisputed master. When she's sent to pick up a package from a whacked-out middle man named Krieg (Paul Scheer, The League, Human Giant), things go considerably pear-shaped, and she finds herself on the run from The Manager, and in turn, his mysterious, but notoriously uncharitable boss.

Sensing a connection between Hamster, Indigo, and his long sought archenemy, Max takes it upon himself to protect her and find those people who would harm her. This is where shit gets real, as Hamster's wild viral tales start to bleed into his reality in a way that makes him and his sister very uncomfortable, and everyone on in between them and the Boss, very expendable.

Max Fist, who once seemed like just a harmless drunk with a talent for storytelling and delusions of grandeur, is now a full fledged vigilante. But is he really a superhero, or just an maniac with a violent streak a mile wide and a high tolerance for pain? This is the question at which Archenemy keeps us guessing, and the one the answer to which terrifies Hamster no matter what the real answer. Max Fist is barreling toward certain annihilation, we all just hope it's that of his enemy, and not all of the people he's sweeping up in the increasingly bloody wake of his rampage.

With Mortimer's second feature, Daniel Isn't Real, he took a sideways look at cosmic horror that really opened up the potential of the genre. Rather than looking outward and seeking to understand a danger from the skies, he pointed that fear inward, to the broken psyche of his protagonist. It was a brilliant move, and an incredible way of making a story that felt huge within a very focused framing device. With Archenemy, he does it again as he takes the story of an intergalactic hero and focuses it into a single character, who may or may not even be who he says he is.

Manganiello's Max Fist is the perfect meeting of actor and role, as the performer is a well-known fantasy geek who hosts regular Dungeons & Dragons sessions among the Hollywood elite, and his passion of the genre shines through in his performance here. Fist is a simmering cauldron of a man, desperate to escape what he sees as an eternity of mediocrity in a world as foreign to him as outer space is to most of us. He spins elaborate yarns to anyone who'll listen of his deeds of derring-do, much like the high school football hero who can't seem to stop talking about his high school glory days well into his '50s. Only, in this case, it's a nigh-invincible alien being who's been sapped of his powers and fallen through a wormhole onto an inconsequential rock to live out his days in loneliness and obscurity.

While his day to day life is lived in darkened alleys and trash-lined abandoned parking lots and buildings, Fist's stories paint a vivid picture of his heroism on Chromia. These stories are illustrated in kinetic animations filled with electric pinks, purples, and blues. Hamster and Indigo are rapt by his storytelling, but too pragmatic to believe them, even as he gradually seems to grow into his own legend. It's a wonderful visual device that not only allows the audience to dive into the world of Fist's stories, but also keeps us a safe enough distance to remain cautiously doubtful of their veracity.

The contrast between the grody, dank world of skid row's reality and Fist's storied past also helps put the audience in his shoes. If my past was full of explosive candy-colored heroics and my present had been reduced to regaling my fellow drunks with stories of the man I used to be, my world would look pretty dim, too. Mortimer and cinematographer Halyna Hutcher (Darlin') make the most of limited locations with this concept, using sparseness to their advantage to emphasize Fist's solitude, particularly in contrast with the idol he once was.

Archenemy's cast is fairly limited, as one might expect with an indie genre film, but the players who do make the cut definitely bring their A-game. Manganiello's performance as the tortured but driven Max Fist is spot on, and his sidekicks Brooks and Griggs deliver solid performances throughout, but I have to say, it's the extended cast that really leaves a huge impression. Howerton as The Manager, with his bleach-blond hair and pedophile mustache is as slimy a character as we're likely meet on screen this year, and a decidedly brilliant costume choice in the finale (ie. cinema's shortest shorts of 2020) really puts his character over the top. The high-off-his-rocker Krieg, as played by Paul Scheer, is another character who is so over-the-top and yet absolutely perfect for the film that even once he's off screen, his presence still looms large. The way this small cast works off each other is exceptionally good, each performer knowing exactly how far to go in each moment in the service of the story of Max Fist.

While broad comparisons could be made to recent indie vigilante films like Matthew Vaughn's Kick-Ass, or more closely James Gunn's Super, Archenemy maintains its own unique identity through a clever compositing of genre tropes and the director's unique vision. While cosmic horror is nothing new thanks to an endless line of Lovecraft adaptations, Mortimer has channeled the infinite potential for those concepts into very personal stories on small scales without losing the ability to keep the big ideas. Archenemy is one of the most original films of the year and a thrilling cosmic adventure with plenty of violence and a big heart. Definitely one to look out for.

Do you feel this content is inappropriate or infringes upon your rights? Click here to report it, or see our DMCA policy.
Adam Egypt MortimerLuke PassmoreLuis Kelly-DuarteSkylan BrooksZolee GriggsJoe ManganielloActionAdventure