Review: MAKE-OUT WITH VIOLENCE, Where Weird and Warm Collide 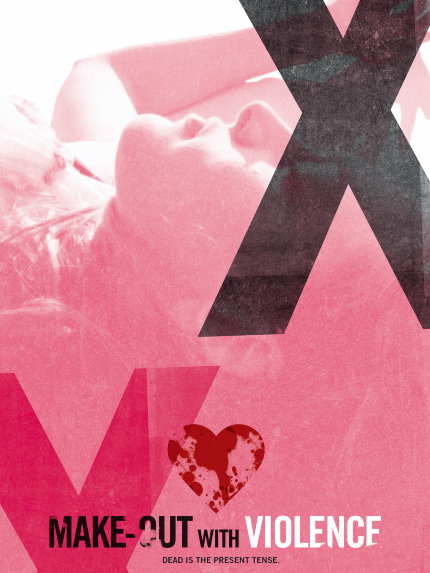 A lawn sprinkler, gushing out images in an uneven stream that gradually soaked me.

Make-Out with Violence defies easy categorization. Sometimes it's at war with itself, as though it doesn't quite know what it wants to be, as though it were made up as it went along. At other times it calms down and plays out like a gloriously trashy, minor-key Eurocult sensation. Sometimes it's an ordinary, quiet teen drama. And always there is the ever-present soundtrack, jammed full of songs, sometimes enchanting, sometimes overpowering the action.

A young boy's narration, like a sweeter, sadder version of Linda Manz' sing-song in Days of Heaven.

Directed by the Deagol Brothers, Make-Out with Violence tells the story of twin brothers Patrick and Carol Darling, who have very different ways of dealing with the disappearance of their friend Wendy. They all hail from a small town, where everyone knows everyone else, yet secrets can still be kept, even when Wendy becomes a zombie.

A romantic triangle is bisected, heat rises from bodies, blades of grass dance in the still summer air.

Wendy's reawakening as a zombie is a silent resurrection, handled as a riff on River's Edge, where the kids make a pact not to tell anyone about the dead body they've found. Only in this case, the body is brought home and tenderly cared for. And Wendy as a zombie actually appears to be an otherworldly creature, not quite knowing what to do with random limbs, faint motor memories fading.

A young cast that doesn't always hit the normal actor-ly notes in the proper sequence, yet still triggers emotional resonance.

The performances are sometimes uneven, but overall they're effective. It helps quite a bit that the actors are not known faces; they actually look like teenagers (or maybe a little older), not thirty-something refugees from TV shows. It feels like they've all known each other for years, just like the characters that they're playing.

A weird and warm movie that I'd like to see again.

Clearly I don't know how to write about this movie, in order to communicate accurately how and why it washed over me, leaving a clean residue of acute heartache, adolescent yearning, and adult trauma. It flips from an initial rush of images, establishing all the key characters, and then becomes a procedural of loss after Wendy disappears, and then grieves incessantly over her loss, even after she returns as a zombie, secretly confined to a house. At the same time, romances and other relationships are pursued and subsequently screwed up.

I'm not entirely sure that Make-Out with Violence exactly works, in the conventional sense of a genre piece or as a coming-of-age drama. It's an artistic treatment of a nearly-straightforward story -- except for the quiet zombie part -- yet it remains exceptionally approachable. At some points it's too arch to be taken seriously, and other sequences are simply mesmerizing. It is heartfelt, ambitious, and original, and definitely worth seeking out to make up your own mind.

Review originally published during the SXSW Film Festival in March 20009. The film is now streaming on Amazon Prime Video and is also available on DVD and Blu-ray from Factory 25.

Do you feel this content is inappropriate or infringes upon your rights? Click here to report it, or see our DMCA policy.
Andrew DuensingBrett MillerDavid FuquaDeagol BrothersShellie Marie ShartzerUS

More about Make-Out with Violence