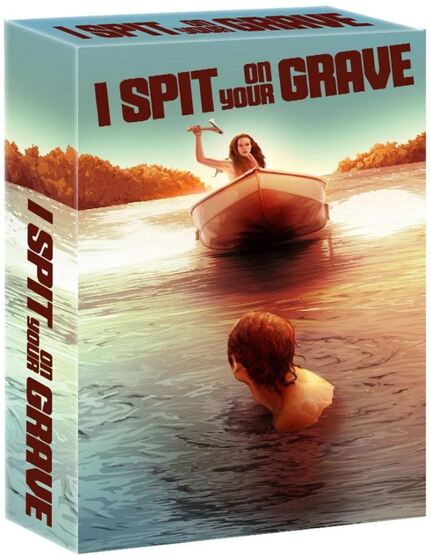 I Spit On Your Grave, one of the most notorious films of the '70s exploitation boom, has just been re-released in a deluxe Box Set from indie distributor, RoninFlix, and it's a thing of shocking beauty. Initially released in 1978 to scathing reviews, I Spit On Your Grave is the brainchild of writer/director Meir Zarchi, an Israeli immigrant who had no intention of making an exploitation film, but nonetheless succeeded in creating a piece of history with his seminal rape-revenge masterpiece.

A young writer, Jennifer Hills (Camille Keaton, What Have You Done to Solange?), leaves the hustle and bustle of the city to a secluded lakeside home to complete her first novel in solitude. Initially infatuated with her idyllic surroundings, Jennifer's dreamy isolation soon gives way to a horrific nightmare when a few of the locals decide to viciously attack her and leave her for dead. However, it turns out she's not so easy to kill, and Jennifer takes her revenge on the violent quartet of assailants, leading to some of the most brutal justice ever doled out on screen.

Objectively speaking, I Spit On Your Grave is not great filmmaking. The writing and acting are more than a little hokey and stilted, and the technical teams manage to present the story competently, but with relatively little style. However, there's no denying the emotional, visceral impact of the film as a harrowing account of repeated acts of sexual assault and ecstatic violent catharsis. It's almost unbelievable how much gut-wrenching emotional impact the film has in spite of its mediocre execution. This is perhaps completely down to Zarchi's passion of the project, which was based on a real life event in which he and a friend rescued a woman from a similar violent attack on their way home from a game of tennis. It's clearly a passion project, and that passion outweighs the dubious nature of the filmmaking on display, leaving the final product just as hard to ignore as ever.

For over four decades, I Spit On Your Grave has remained a touchstone for the rape-revenge genre. Far from the first such story, its notoriety was bolstered by a campaign to keep it off cinema screens spearheaded by no less than the iconic Roger Ebert, who described the film as, "so sick, reprehensible and contemptible that I can hardly believe it's playing in respectable theaters," with the rest of the review getting even more vitriolic, which only served to amp up the public's morbid curiosity. From there the film was put on the original Video Nasties list in the UK, with punishment for possession of the VHS cassette ranging from enormous fines to actual jail time. And still, the film's reputation grew, even with the odds stacked against it, I Spit On Your Grave has become iconic, spawning not only a remake with two sequels, but also a true sequel - included in this set - and this marvelously complete box set of the original saga.

Speaking of sequels, RoninFlix worked with Zarchi to ensure that this would be the definitive release of I Spit On Your Grave, including the 2019 sequel, I Spit On Your Grave: Deja Vu, and feature length documentary, Growing Up With I Spit On Your Grave, written and directed by Terry Zarchi, the original director's son. While neither of these additional features quite match the absurd zenith of the original, they put it in context as a piece in the filmmaker's long career and help to contextualize a long demonized work in terms of its original intentions and the struggles Zarchi faced in getting it to the big screen all those years ago.

In I Spit On Your Grave Deja Vu, Zarchi continues the saga of Jennifer Hills, whose original intention of becoming an author has been fulfilled, though not in the way she originally intended. Hills became famous for her written document of the famously traumatic experience of the original film. However, when she returns to the area to meet up with her daughter, Christy (Jamie Bernadette), things go horribly awry when the two are kidnapped by the families of Hill's attackers, who are bent on bloody revenge.

Far from the grittier look and feel of the remake cycle, Deja Vu instead takes the I Spit On Your Grave story to much to much stranger - and often goofier - places. Keaton returns as Jennifer Hill, with Bernadette's Christy Hill taking her place as protagonist once her mother's story ends gruesomely. While Christy has equally appalling violence visited upon her, this feels more like one of the sadder, pulpier Wrong Turn sequels than the grueling experience that was the original ISOYG. Absent the simple rape-revenge story of the original film, Zarchi instead turns Christy's saga into one of generational violence and unrequited feuding with some truly jaw-dropping (not in a good way) performances, over the top extreme gore, and a truly patience testing two and a half hour run time.

It's a far cry from the immediacy and simplicity of the original film, making the frequent sophomore mistake of attempting to expand the universe of the original without paying attention to why the original was a success in the first place. Every character feels like a caricature, and while a few of the villains in the original - the simple Matthew, in particular - were incredibly broad, they were never cartoons. The lack of authenticity depletes the emotional impact of the film, even though it comes from the same mind as the original.

Rounding out the box set is Terry Zarchi's Growing Up With I Spit On Your Grave, a feature length look-back at the film's production history and legacy. Terry has a unique perspective as not only Meir Zarchi's son, but also a member of the original ISOYG cast and subsequent crew member on his father's later work. Less a probing documentary than a loving hagiography of the film and the phenomenon it launched once Siskel and Ebert got a hold of it, this documentary is nonetheless packed with solid information and behind the scenes anecdotes. A lot of what the doc talks about is covered in the numerous bonus materials (more on them in a minute), but Terry's perspective lends a more personal touch to the saga that is a welcome tonal shift from the heaviness of the films themselves.

Is Growing Up With I Spit On Your Grave great documentary art? Not really, Terry Zarchi seems somewhat uncomfortable with the constant voice-over he provides, a shortcoming to which I can definitely relate, and his script could've used a few extras sets of eyes to help tighten it up and make it less overly formal sounding. However, as more of a feature length bonus feature, it's not too shabby, and does manage to shine a light on the entire journey, from inspiration to execution, to legacy, of the I Spit On Your Grave saga and the life and work of Meir Zarchi. Definitely worth checking out, just moderate your expectations and let it wash over you.

Whatever the quality of the films, RoninFlix have definitely given them their due in the technical department for this new box set. Only the original I Spit On Your Grave was shot on film, and this brand new 4k scan from the original camera negative is startlingly gorgeous. On top of dramatically improved sharpness, it's the vibrant color scheme that truly pops out on the disc. The verdant greens and blues of the original film are very impressive, and the frequent flashes of red, both in terms of wardrobe and violent bloody interjections, are impressively well rendered. The DTS-HD Mono track renders the dialogue easy to decipher and the ambient sound well balanced. This is by far the best the film has looked on home video, and I don't think it'd be a far bridge to cross to imagine that it never even looked this good on Drive-in screens back in 1978. When it comes to the sequel and documentary, both were shot digitally, and they look perfectly fine. I don't think anyone is particularly concerned with those restorations though, so I'll leave it at that.

All three included discs are packed with bonus materials, many ported over from previous releases, but several newly recorded just for this box set. On the original, we get separate archival commentaries from Zarchi and Drive-in guru, Joe Bob Briggs. Zarchi's is mostly pretty dry, but informative, while Briggs brings his trademark Texas twang and affinity for the material to bear, making it the more enjoyable experience. We also get an archival interview with Zarchi, and a newly commissioned location featurette with genre film expert and enthusiast Michael Gingold, along with trailers, TV & radio spots, and a still gallery. A solid disc.

For Deja Vu, Briggs returns with another commentary track, a big ask considering the film's imposing run time, and he delivers again, talking about the good, the bad, and the ugly of the film all with equal zeal. The disc is also packed with behind-the-scenes and making-of footage, mostly not contextualized and pretty raw, along with cast interviews and a theatrical trailer. After the grueling experience of spending 150 minutes with Deja Vu, you might not be up for digging into the bonus features for the film right away, but once you do you definitely see that no matter how the film came out, there was a passionate team behind it, which definitely helps cushion the blow.

Growing Up With... includes several deleted scenes discussing some hot topics, such as the affair between Zarchi and his young starlet that led to their short-lived marriage (documented on the disc), as well as some on set stills from the '78 original and an 8MM short featuring Terry, Camille Keaton, and Terry's sister. It's all very sweet and has the feel of a passion project, which can forgive a multitude of sins.

In terms of physical materials, this new box set comes packaged with a 44-page booklet featuring an exhaustive production history of the film series by Michael Gingold and a more personal essay by Meagan Navarro. It's definitely worth reading up, though much of Gingold's material is covered in the various featurettes, there are still plenty of surprises to appreciate. Capping it all off are poster reproductions of both films and some pretty stellar original art from Adam Stothard.

The original I Spit On Your Grave is not an easy watch, even all these years later, and the other features in this set don't quite live up to its indelible impact, but if you know the movie and love the movie, you want this set. Far and away the best presentation of ISOYG on the market, highly recommended. 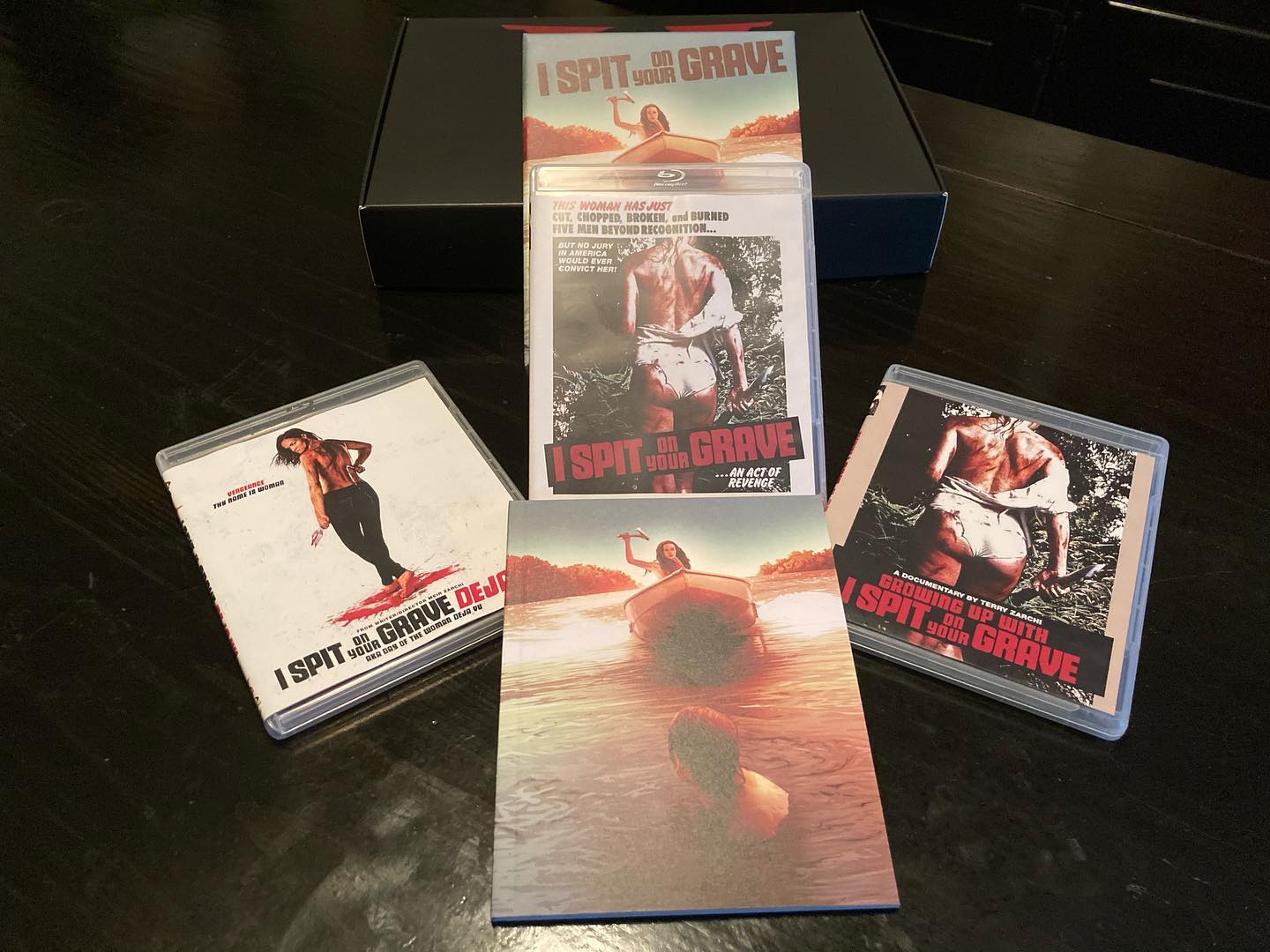 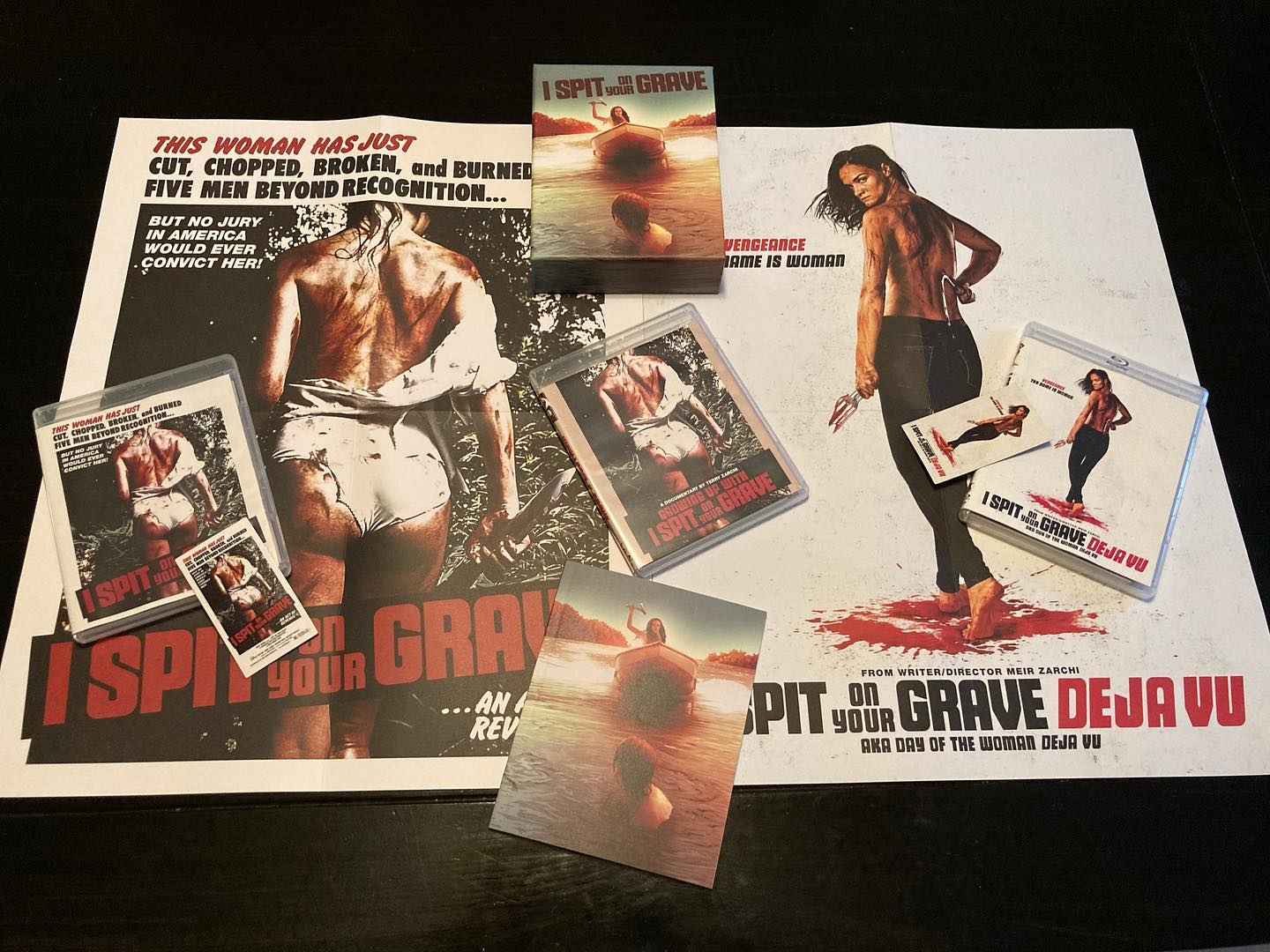 More about I Spit On Your Grave