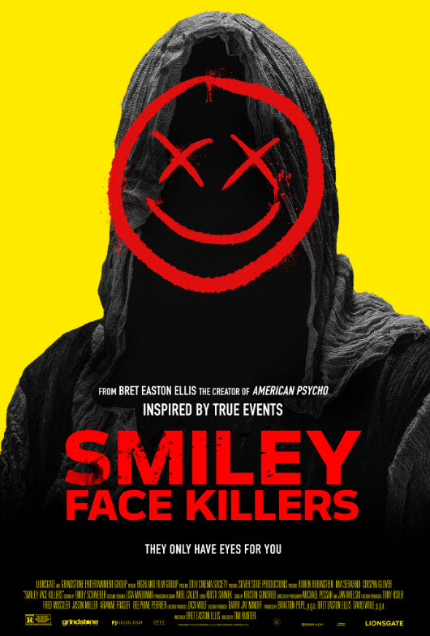 Bret Easton Ellis gets top billing in the poster for Smiley Face Killers, which claims it is "inspired by true events," yet what primarily grabs my attention is director Tim Hunter.

Reuniting with Crispin Glover (from the director's River's Edge) is good -- here he is concealed as a cloaked figure -- and sounds promising, as does the premise that the film is also inspired by "the twisted 'smiley face killers' conspiracy theory that has gripped the American imagination for decades," per the synopsis.

Still, director Tim Hunter remains a potent force, as he proved with his somewhat loony, entirely compelling previous feature film, Looking Glass (2018). Here's what I wrote about him in my review at the time: "Director Tim Hunter first came on the radar by cowriting Jonathan Kaplan's excellent Over the Edge (1979), then cowrote and made a notable directing debut with 1982's excellent Tex. But it was River's Edge (1986) that cemented his reputation as a filmmaker who could create palpable, sustained tension.

"Though he's made only a few features since then, Hunter has accumulated an impressive list of credits helming episodic television shows, including Twin Peaks, Eerie, Indiana, Carnivale, Deadwood, Breaking Bad, Mad Men and Hannibal. So it's no surprise, really, that Looking Glass is a moody, crackerjack thriller that becomes more mesmerizing as it plays."

I'm not so convinced about Bret Easton Ellis, who has been more of a mixed bag over the years, but with Tim Hunter at the helm, I'm looking forward to see what comes of Smiley Face Killers. Here's the official synopsis:

"As a strange wave of mysterious drownings of male college students plagues the California coast, Jake Graham (Rubinstein) struggles to keep his life together at school. Finding himself stalked by a hooded figure (Glover) driving an unmarked van, Jake fears he may become the next victim in the killers' horrific spree."

The film will be "slashing its way onto Digital and On Demand, and available to own on Blu-ray™ and DVD December 8 from Lionsgate." (From the official description, not mine.) Watch the trailer below.

Do you feel this content is inappropriate or infringes upon your rights? Click here to report it, or see our DMCA policy.
Bret Easton EllisCrispin GloverMia SerafinoRonen RubinsteinTim HunterUS