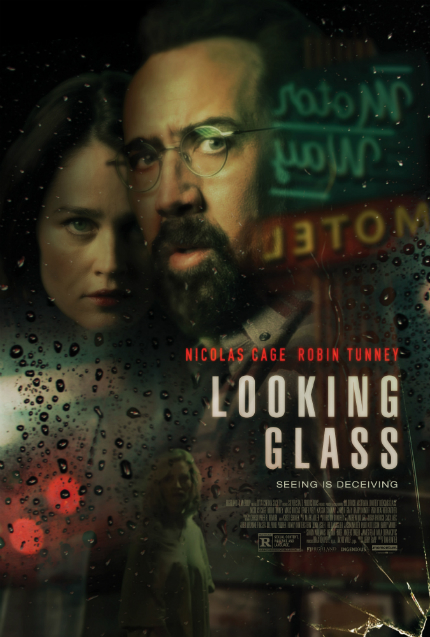 Moving to Arizona and running a motel sounds like such a great idea!

Unless, of course, you're Ray (Nicolas Cage), who has a fresh start in mind when he and his wife Maggie (Robin Tunney) assume ownership of a small motel in Arizona. On the road trip there, Ray is solicitous of Maggie's needs, which might be explained when we see the bottles of pills that she's dipping into, nervously.

She is not the only nervous one. Upon arriving at the Motor Way Motel, the couple learns that the former owner, Ben, has disappeared from the premises. When Ray contacts him by phone, the older gentlemen is unexplainably jumpy. Completing the trifecta, Ray himself is restless and insomniac. Are they all suffering from nervous conditions, or is something more troubling afoot?

The superbly measured script by Jerry Rapp slowly unpeels Ray and Maggie's troubled personal history, even as a larger mystery develops. The titular "looking glass" reminds of the controversy surrounding Gay Talese's The Voyeur's Motel and the alleged longtime peeping by an owner on his guests. It's rather a relief, then, to realize that the looking glass is only one ingredient in the quickly warming stew. Really, it's a mark of how refreshing this thriller proves to be, as the script parses out intriguing clues and the visual storytelling continually draws the mystery tighter even as new clues and possibilities are unleashed.

Director Tim Hunter first came on the radar by cowriting Jonathan Kaplan's excellent Over the Edge (1979), then cowrote and made a notable directing debut with 1982's excellent Tex. But it was River's Edge (1986) that cemented his reputation as a filmmaker who could create palpable, sustained tension.

Though he's made only a few features since then, Hunter has accumulated an impressive list of credits helming episodic television shows, including Twin Peaks, Eerie, Indiana, Carnivale, Deadwood, Breaking Bad, Mad Men and Hannibal. So it's no surprise, really, that Looking Glass is a moody, crackerjack thriller that becomes more mesmerizing as it plays.

Cage captures the full range of his character's emotions. It's no secret that he's capable of scary, wild fury, yet he's equally effective when he exercises restraint and merely suggests what's going on beneath the new motel owner's quiet exterior. Tunney appears to have the thankless role of "wife," which only begins to hint at the depth of both her character and her performance. Marc Blucas (as a friendly police officer) and Ernie Lively (as a truck driver who likes to entertain female company in his room) stand out in the supporting cast, not only for their key roles but the subtle and understated ways in which they make their respective presences known.

Looking Glass opens in select theaters and on Video On Demand and Digital HD on Friday, February 16, via Momentum Pictures.

Do you feel this content is inappropriate or infringes upon your rights? Click here to report it, or see our DMCA policy.
Ernie LivelyMarc BlucasNicolas CageRobin TunneryTim Hunter