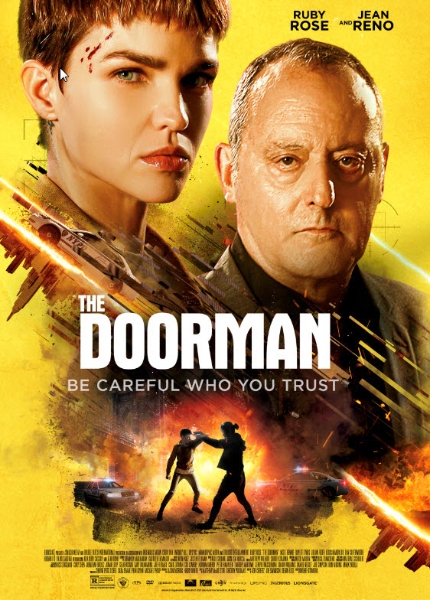 Just a few, mid-pandemic months ago, Ruby Rose abruptly exited the CW's Batwoman series after just one season, but whatever happened to lead to her departure (e.g., long hours, early-season injury and subsequent recovery, or the constricting nature of the material), she's back on our HDTVs, this time as the titular character in a standalone actioner, The Doorman, a woefully inept, profoundly uninspired Die Hard rip-off with little of the wit, charm, or action of its stone-cold classic, 32-year-old predecessor.

As a seemingly intentional attempt to showcase Rose's ability to carry a film on her own as an action lead, The Doorman fails miserably. At best, it will be justly thrown on the ash-heap of genre history, forgotten milliseconds after the end credits mercifully fade to black on a painfully excruciating 97-minute runtime.

Going where countless straight-to-video or straight-to-streaming action films starring second- or third-tier wrestling or MMA stars have gone before, The Doorman opens with an obligatory ambush scene that leaves a handful of ski-mask-wearing, pudgy henchmen dead on a side of a narrow forest road, but not before the preteen daughter of a no-name American diplomat loses her short, brief life in a fiery, RPG-caused explosion of car and body parts. Ali Grossi (Rose), inexplicably the only military member in the diplomat's protective detail, escapes with her life, a shiny medal for futile, if deadly, efforts, and a bad case of PTSD that only a subsequent conscience-cleaning bloodbath of disposable, murderous thugs will ameliorate, if only long enough to get Ali the happy ending she apparently deserves.

Smash cut to a few months later and Ali's back in the states -- supposedly New York City, but the architecture says she's still stuck somewhere in the middle of Eastern Europe -- and looking for gainful employment after being honorably discharged from the U.S. Army. Thanks to an uncle with an unexplained British accent, Pat (Philip Whitchurch), Ali gets what should be a cush job, working as a doorman in a semi-abandoned apartment building, the Carrington, currently undergoing top-to-bottom renovations.

Little to Ali's knowledge, her brother-in-law, Jon Stanton (Rupert Evans), a British-accented college professor of literature or some such, and his two children (sans accents), Max (Julian Feder), a typically surly, rebellious, pot-smoking teen with daddy issues, and Lily (Kíla Lord Cassidy) taking the reigns of precocity from the young girl who didn't survive the opening scene, are all staying in the building over the Easter holidays. (The less you know or learn about the unfortunate fate of Ali's fridged sister, the better off your brain will be.)

Initially upset at getting played by her manipulative uncle, Ali eventually warms up to the perpetually cheerful Lily and later, under much more difficult, life-or-death circumstances when they're on a slow walk to the end credits, Max, and even later Jon, once the film's generic villain, Victor Dubois (a sleepwalking Jean Reno), and a team of poorly dressed mercenaries, led by the unnecessarily cruel, callous, and violent Borz (Aksel Hennie), hold Jon and Lily hostage in their 10th-floor apartment while Dubois and his mercs search their apartment for long-lost art treasures with all the subtlety or nuance of a sledgehammer or four.

What follows doesn't so much boggle the mind than put said mind into a self-induced coma. Despite an early, momentum-sapping tour of the building, we never really get a sense of the layout, only that secret passageways, built long ago for no apparent reason, give Ali and Max multiple opportunities to slip past their pursuers as Ali, in John McClain fashion, begins to pick off the mercs one-by-one with less than deliberate speed. Rose handles the limited demands of the unimaginative action scenes with bored, barely present energy and with director Kitamura Ryûhei (The Midnight Meat Train, Azumi, Godzilla: Final Wars, Versus) putting as little effort into the stunt choreography as the story itself, it's only a matter of time before Ali faces off with Borz in an overextended, haphazardly executed fight scene with the literal fate of her family hanging in the (insert yawn here) balance.

Astonishingly, it took two sets of writers (four total), Lior Chefetz and Joe Swanson on the final screenplay and Greg Williams and Matt McAllester with original story credit, to churn out The Doorman, most likely over an alcohol-involved weekend at a ski resort or mountain retreat. Whether the original script was so poorly written that a second pair of writers were needed just to elevate the film into sub-mediocre territory is anyone's guess, but based on the execrable onscreen results directed by Kitamura in unusually somnambulant form, The Doorman isn't worth the time or effort to track it down, let alone pay more than the pre-pandemic equivalent of a bargain matinee for a 24-hour VOD rental or DVD/Blu-Ray purchase.

The film is available to rent via VOD or purchase via DV/DBlu-Ray.

Do you feel this content is inappropriate or infringes upon your rights? Click here to report it, or see our DMCA policy.
Aksel HennieJean RenoKitamuraRuby RoseRupert EvansUS

More about The Doorman