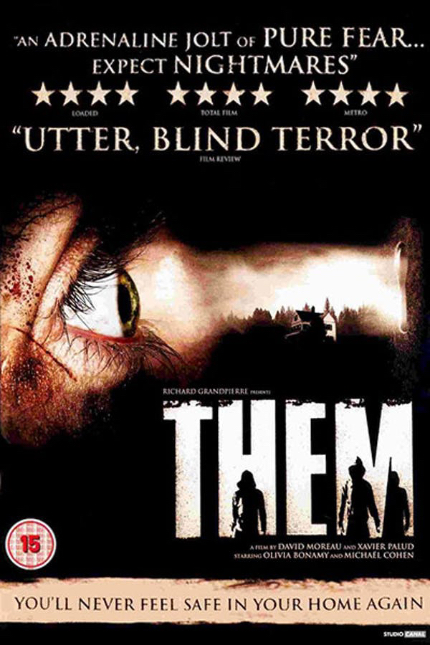 You can't take the night off from terror.

Ils (aka Them)
Now streaming on Shudder.

"They're a lovely couple, a writer and a teacher, and they're perfectly happy living in an old house on a big piece of property in a remote area in the country, until strange things start happening late at night, and hooded figures appear in the darkness, figures who may not be physically imposing but whose actions put the couple in mortal danger. An unnerving, perilous night ensues."

The above paragraph is -- spoiler! -- what I wrote in April 2011 as part of an article whose title, I now realize nine years later, and 14 years after the film's original release, gives away more of the plot and its deceptive gut-punch of a conclusion than I intended, then or now.

This week, Ils became available on the Shudder streaming service, and it certainly deserves a look for horror fans. To some extent, it's fallen between the cracks in a decade that was crackling with a stabby variety of horror films from France, even though it's best appreciated on its own merits, as explained by the very knowledgeable Niels Matthijs, an occasional ScreenAnarchy contributor who goes into more detail on the film at his own site.

A single viewing more than a decade ago lodged multiple scenes firmly into my memory, though it looks much rougher visually than I remembered. Yet it's also more effective in how it builds up the story at a deceptively calm pace before revving up its engine to a surging, furious pace of anxiety.

This is not a slick, commercial affair. In various ways, it feels very, very rough, almost like a home movie at times, though the direction and the editing and the framing and the setups demonstrate that very intelligent thought went into each decision in making the picture. And the performances by Olivia Bonamy and Michaël Cohen are entirely convincing; everything they do makes sense and feels authentic.

All I know is this: I wasn't planning a trip into the European countryside anytime soon, anyway. Your mileage may vary.

Do you feel this content is inappropriate or infringes upon your rights? Click here to report it, or see our DMCA policy.
David MoreauFranceMichaël CohenOlivia BonamyShudderXavier Palud