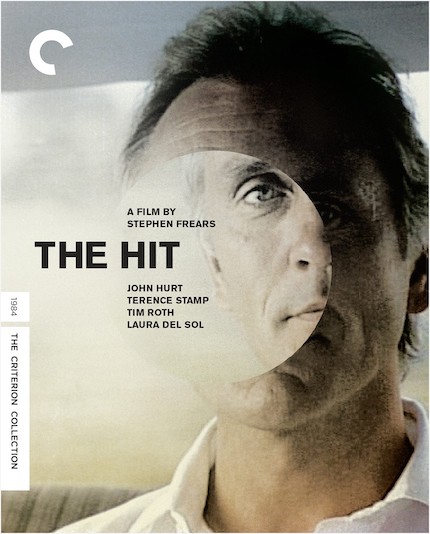 The 1984 film The Hit is out today on Criterion Collection --- and they're having a 50% off flash sale right now, so if you've been waiting to score some awesome box sets, get to it ASAP. (For those of you who subscribe to Criterion's streaming service, The Criterion Channel, the film can be found there, as well.)

Directed by Stephen Frear (Philomena, Dangerous Liasions, The Queen, Dirty Pretty Things), the film stars Terence Stamp (Superman, Wall Street, The Sicilian, Far From the Madding Crowd) as Willie, a former gangster-turned-informer. He's been hiding out in a sunwashed Spanish village for a good ten years when his luck runs out and he's found and delivered by a group of amateur thugs who are immediately dispatched of in a fiery car bomb explosion.

Enter one of our finest actors, John Hurt (1984, The Elephant Man, Aliena, I, Claudius) as Braddock, an aging, no-nonsense hitman whose job it is to deliver Willie to his boss in Paris for execution. Joining him is the young, trigger-happy Myron played by Tim Roth (Pulp Fiction, The Hateful Eight, Selma) in his first theatrical film. Roth was BAFTA-nominated for his role here for "Most Outstanding Newcomer to Film," a true acting feat.

As in court when Willie ratted out his partners, he takes on an oddly zen approach to being kidnapped. He laughs and philosophizes about his situation in a funny, detached sort of way that a Buddhist might. It distracts Braddock enough to take a step back and at times, causes the criminal to make some serious mistakes in judgement and allows for things to get even more out of hand.

One of those things comes in the form of a young woman, Maggie, played by Laura del Sol (Carmen, Voyage to Nowhere). She's effectively collateral damage in being at the wrong place, wrong time, along with her much older boyfriend. They've been using the boss' safehouse as a living space, and when Braddock and Myron show up with Willie in tow, they're done for.

Except that Braddock makes an ill-fated exception to murdering Maggie, and softening his heart to her youth, beauty, and boyfriend's pleas proves to have disastrous consequences.

From there, The Hit becomes a road movie filled with ridiculous mishaps and unexpected character decisions. This film predates others like Sexy Beast, The Limey, Pulp Fiction, In Bruges, the films of Guy Ritchie, and others of its ilk. It's an interesting, more "humane" hit man dramedy that didn't do well on its initial release, but is hopefully being rediscovered, especially with this Criterion release.

The film has a washed-out, cinematic look from director of photography Mike Malloy, due to most of it being shot in sun-drenched, rural Spain. The picture looks pretty good for the most part, as its meant to reflect the heat of the landscape, and sound is excellent.

To read more, check out a trailer for The Hit, and add it to your home collection, head over to Criterion's page for the film here.