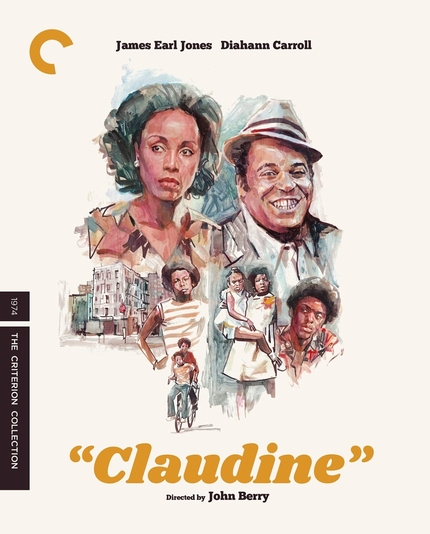 When Diahann Carroll died last year I watched John Berry's 1974 film, Claudine, for the first time -- and quickly became embarrassed that it had gone unnoticed on my radar for so long.

Emerging at the height of the blaxploitation era, Claudine maintains many of the trappings -- music by Gladys Knight and Curtis Mayfield; a socially conscious white director essaying his take on Black lives -- while giving the slip to the easy categorization of crime films or action comedies. It's probably best described as a social drama, but Claudine's script (by Tina and Lester Pine) moves deftly between modes to present a rounded picture of a single mother raising her children in the welfare system in Harlem in the 1970s.

There is, of course, a great romance at the heart of the tale, as Claudine meets and is wooed by Roop (James Earl Jones), a garbageman with an easygoing manner and more than a few stumbles of his own along the road to Claudine's door.

There's also an appreciable sense of Claudine as a sexual being, something (at her age of 36) that her children want desperately to deny and obstruct, but which her friends on the bus recognize as an immediate, unashamed need: Claudine's gotta get laid, which has nothing to do with her family, or welfare, or the white family she housemaids for; it's about her happiness and wellbeing, only, which are given good measure throughout the story.

Having discovered it so recently, I was delighted when the Criterion Collection announced that they were adding Claudine to their October releases. It comes in at spine #1052. The disc is on the light side for new features, though what's here presents a useful context overall, repurposing existing material to good effect. There's a commentary from 2003 featuring Carroll and Jones, and separate from the film, an audio track from an AFI talk in 1974 where Carroll discussed her role and the film. (Artwork and period photography make up the visuals here.)

Critic Imogen Sara Smith does a 20-minute video feature about the surprising career of director John Berry, who remains somewhat lost to history but had an almost Young Indiana Jones-ish quality throughout his career, interacting with Hollywood luminaries and cultural heavyweights as widely spaced as Orson Welles, Billy Wilder, Maya Angelou, and The Bad News Bears Go To Japan.

Even more substantial is a (Skyped) conversation between film curator Ashley Clark and actor/filmmaker Robert Townsend, where they grapple with Claudine's refreshing take on love and sex beyond the framework established by then-dominant blaxploitation films. Townsend -- who claims Claudine as his favourite film -- also has memories of working with Carroll and Jones and their experiences making Claudine.

The film is now available on Blu-ray from the Criterion Collection.

Do you feel this content is inappropriate or infringes upon your rights? Click here to report it, or see our DMCA policy.
Diahann CarrollJames Earl JonesJohn BerryLawrence Hilton-JacobsUS